[Editor's note: Forty years after Hartley Bay, B.C., first dreamed of replacing its dirty, expensive and unreliable diesel-powered community generator with a clean micro-hydro plant, ground has yet to be broken. The hold-up isn't technology, Christopher Pollon reports in this second dispatch from Hartley Bay. Nor is it unique. Like many remote First Nations, the Gitga'at face a David-and-Goliath struggle of limited resources and complex government bureaucracies.]

By the time the Great Recession of 2008 hit, Hartley Bay's decades-long struggle to shed its reliance on diesel was in a precarious place. The complexity of navigating multiple funders and governments with limited funds and human resources was becoming overwhelming. 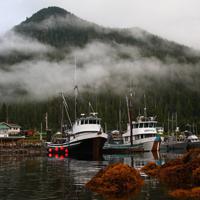 In Hartley Bay, a Four-Decade Fight to Dump Diesel Continues

Then Enbridge came to town.

Roger Harris, a former BC Liberal MLA and Enbridge's Northern Gateway point man for aboriginal relations, visited the isolated reserve, 140 kilometres south of Prince Rupert on British Columbia's north coast, in February 2009. He arrived knowing the community of fishermen, dependent on salmon and eco tourism, was vehemently opposed to his company's plan to turn their coast into a high-traffic oil tanker route.

At a private meeting between Enbridge and Gitga'at leaders in February 2009, according to several band members, Harris argued that the Gitga'at rely on diesel for electricity, so why shouldn't people in foreign countries who need fuel for electricity be able to have that as well?

The Giga'at leadership was incensed. They had struggled for decades to build a clean hydro plant and transition off diesel. Such words now fuelled their resolve.

As it happened, Hartley Bay's energy file was by then in fresh hands. David Benton, a Vancouver lawyer and business grad, arrived serendipitously, accompanying his partner at the time, who was Gitga'at, on a visit to their home. Smart, articulate and intense, Benton soon found his skills in demand, first as health manager, then as band manager, and eventually as the hydro project manager.

In 2014, the Gitga'at signed an energy purchase agreement in which BC Hydro agreed to buy the power the village generates. Benton and the band negotiated $10 million in grants and an additional $12 million in financing. It would take 25 years to pay off, but after that the project promised to generate net revenue for the Gitga'at nation.

The project's design evolved as funding doors opened, but costs were escalating. Many stemmed from the Gitga'at's insistence on self-reliance. A two-way fish ladder to protect local stocks and other mitigation measures would cost $1.5 million. A six-kilometre road and buried transmission lines would consume another $6 million. But memories of the great blackout of 1975 linger. If the plant ever went down for any reason, the community refused to be dependent on the outside world to get it fixed. Still, self-reliance comes at a price: all in, the project cost today is estimated at $25 million.

As of March 2015, Hartley Bay's hydro plant remains in limbo, with no clear path forward.

Perhaps no one in Canada knows more about what it takes for remote First Nations to get off diesel. Henderson has consulted for Aboriginal Affairs and today advises or represents numerous First Nations trying to develop clean energy. But despite available technology and strong interest, he says, many barriers remain.

As he explains it, the different cost curves of diesel and clean energy stack the cards against change for many small and cash-strapped communities, even if it could mean long-run savings. Diesel generation requires only a modest up-front outlay of capital; 85 per cent of the cost is in ongoing fuel purchases. Clean energy projects like small hydro, by contrast, require big capital expenditures upfront. Positive economic returns over the longer term, such as net revenue for decades ahead -- often do not influence the short-term decision.

"This is not a technology issue," says Henderson of the barriers to clean energy in remote places. "It's a combination of community capacity and leadership, coupled with the right fiscal environments to recognize the true costs of diesel power."

Henderson is trying to tackle these problems by launching what he calls the 20-20 Catalysts program, which pairs Canadian First Nation communities seeking to get off diesel with mentors. He hopes it will create and nurture "project champions" with the skills to push projects into being. (On the day I talked to Henderson, he was talking with David Benton about Hartley Bay.)

'We've done it and we know how'

His highest profile mentor is probably Peter Kirby, an energy pioneer and citizen of Atlin B.C.'s Taku River Tlingit First Nation. He spent a decade navigating funding and bureaucracy on the way to completing a 1 megawatt hydro project for the community in 2009. Now he's taken on the mentor's role because, he says, "we've done it, and we know how to do it."

From the beginning, Kirby and other project leaders consulted their neighbours, a vast majority of whom supported the plan. They lined up an investor on very good terms (insurance company Canada Life), tapped money from EcoTrust's First Nations Regeneration Fund, and later enlisted help from the First Nations Finance Authority. They hired an innovative contractor who shaved hundreds of thousands from construction costs. And when it came to designing a corporate structure to develop the project, they created a limited liability company that operates at arm's length from the local politics of the community.

Today, Atlin's diesel generators are maintained and ready, but usually silent. A plan is afoot to expand their hydro project to 5 MW (pending community approval) and sell the excess power for profit to the Yukon electrical grid, with the profits flowing back to the first nation.

Wind, solar, and geothermal too

While the Gitga'at have nearly five metres of annual rainfall, a site on the edge of Kluane Lake in the Yukon has an average wind speed of six metres/second, which is ideal for the three 95-kilowatt turbines that should stand on this site before end of year.

With advice from Kirby and the leadership of two-term chief Math'ieya Alatini, the Kluane First Nation of Burwash Landing, Yukon is developing the project to minimize its diesel consumption. It's also pursuing solar, geothermal and biomass energy sources.

The Kluane First Nation became self-governing in 2004, which meant that unlike most B.C. First Nations, it was able to draw on settlement and trust dollars to leverage private financing for clean energy. It also means the community doesn't have spend so much time navigating the bureaucracy of the federal government's Aboriginal Affairs department.

The wind project will reduce the need for diesel generation by a third. Their oil consumption is already down because the community burns 100 cords of pine-beetle-salvage wood 'biomass' annually -- fed into a chipper and wood-fired boiler that currently heats over 12,000 square feet of indoor space in the community. Alatini says there's enough beetle wood to keep the community warm for the next 20 winters.

Solar panels provide electricity to a municipal building, and plans are afoot to source geothermal energy from a fault-line that underlies Kluane land. (Predesign work should be done this year to pipe warm water up from the earth to heat a greenhouse.) Alatini's dream is to establish a closed-loop greenhouse food system that will grow tilapia and fertilize vegetables with the fish waste.

"We have a say in how we want our future to look, so why wouldn't we be green?" she asks. "Being green just fits who First Nations people are."

On March 4, BC Hydro started accepting applications for its latest "standing offer" program to help First Nations and other small, off-grid communities develop very small-scale (between 100 kilowatt and 1 megawatt) clean energy projects. The program is designed to streamline the complexity of the process. 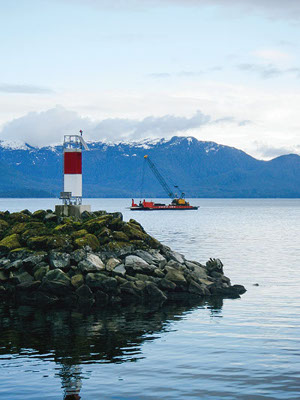 Hartley Bay's nautical beacon is solar powered, but the ships and barges that bring diesel and all things the Gitga'at cannot supply themselves run on fossil fuel. Photo by Christopher Pollon.

But it comes too late for Hartley Bay, which has already negotiated many of the hurdles it's meant to sweep away.

At around the same time, Hartley Bay's own leadership dealt David Benton some disheartening news. After nearly eight years of pushing hard for a hydro project close to the village, he learned that the communities leaders are considering an alternative: a cheaper project that would involve running an undersea cable from the community to a nearby island.

Benton was asked if he was still willing to be involved, a question that forced him to think long and hard.

"First and foremost, my relatives live here," said Benton, whose recent adoption into the Gitga'at Raven Clan marks his acceptance as a member of the community. "I have experienced what no electricity is like here, so I said yes."