''Let them eat cake!'' -- Attributed to French Queen Marie Antoinette, 1755-93, in response to the poor not having bread 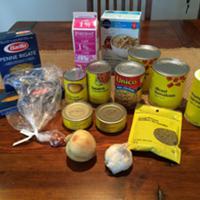 Minister, Is $21 a Week Enough for Food?

British Columbia has the best economy in Canada -- something that BC Liberal Premier Christy Clark is constantly boasting about, calling it the country's only ''bright spot.''

And that's great news, but when do people in need start seeing any of the benefits?

Today is B.C. budget day, but don't count on Clark to deliver because it's simply not her priority.

B.C. has Canada's leading economy, yet 20 per cent of our children live in poverty, according to advocacy group First Call's analysis of Statistics Canada figures.

People with disabilities haven't had an increase in benefits since 2007 and are expected to live on just $906 a month, including food and shelter costs for a single person. Try that in Metro Vancouver.

And while B.C.'s economy is the best, we also have the second lowest minimum wage in Canada, and that's after Clark raised it a paltry 20 cents last September to just $10.45.

Over 120 schools have waited decades for seismic upgrading needed to protect kids, teachers, and staff from death and injury in a region prone to earthquakes.

So what does the premier of Canada's strongest economy announce as a spending priority?

Giving $15 million to B.C.'s music industry, in a photo opportunity with crooner Michael Buble, who gushed at Clark while wealthy promoters and recording executives fell all over themselves to praise the premier.

Nothing for school 'band and strings'

Front and centre at the event to promote the BC Music Fund was CKNW radio hot air vent Bruce Allen, the agent for Buble and other big name Canadian musicians such as Bryan Adams and Jann Arden who's on the record as saying that Canadian content rules in the past that promoted local talent were crap.

''I get pissed off that too many artists are given the label 'great' when they haven't earned it. I do not believe the Tragically Hip are great. I believe they're a Canadian act that wouldn't even be in existence today if it wasn't for Canadian content,'' Allen said in 2007.

''So when I sit there and hear about the New Pornographers being great, or Neko Case being great -- I go crazy. What? You earned 'great' because you sold out the fucking Railway Club? I don't get it,'' Allan ranted.

But that was then and this is now -- because Allen's pal Christy Clark is offering to subsidize his industry, without any indication how the $15 million will be spent.

Meanwhile, the Vancouver School Board is once again contemplating having to cut its ''band and strings'' programs due to lack of sufficient funding.

School board trustee Patti Bacchus ironically noted: ''It is my hope this [BC Music Fund] funding would provide some sustainable funding so we can continue to keep that program running because it is at risk, as each year we are required to cut something from our budget to balance it in the current funding model we have for public education.''

'Bright spot' for whom?

Clark also announced the government would spend $355 million over five years on affordable housing, a welcome but overdue and insufficient move.

And then it turns out that BC Housing, a provincial agency, has already budgeted far more for social housing over the next two years than the premier's own announcement -- $209 million versus $100 million, all coming from the same fund.

But premier Photo Op isn't concerned -- she just keeps telling us how good we have it: ''When you look at the map of the country, the only bright spot you see is British Columbia because we're strong, we're diverse and we're growing,'' Clark said this month. ''We really are the only bright spot in the country right now. There's so much uncertainty, such debt. So many people unemployed."

So the question is -- when do British Columbians, especially those who most need help from government, see the advantages having Canada's best economy should provide?