British Columbia's mining minister says allowing mines to delay paying for electricity will help workers through a time of low commodity prices, but the head of a union representing many of those workers dismissed the announcement as a photo op and said there are better ways to help. 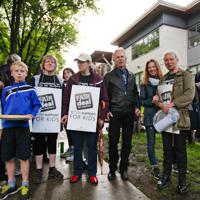 A Year's Worth of Big Labour Moments, in BC and Beyond

Bennett said workers and the companies that own 13 metal and coal mines in B.C. lobbied for the deal, which will allow the companies to defer paying 75 per cent of their electricity bills to BC Hydro for up to two years.

Not all the companies will take advantage of the opportunity, but if they did, it would add up to about $330 million in deferred payments, Bennett said. The companies would later have to repay the amounts, plus interest at between about eight and 12 per cent.

"It's a deferral, not a grant or a gift or a subsidy," said Bennett. "The reason we're doing this is to help these companies make the decision to stay open as long as possible while these commodity prices are low so people can be employed and can continue to put food on the table at home."

Asked how BC Hydro is protected if one or more of the companies fails, Bennett said the government anticipates companies will be making decisions about whether to keep mines open but not going bankrupt.

"We don't anticipate any of these companies being insolvent or going under," he said. "If the worst happened and there was a company that could not repay the deferred amount with interest to BC Hydro, the arrangement that we have is that government and BC Hydro will sit down and figure out a way for BC Hydro to be repaid for that amount."

Other industries in B.C. receive significant help through tax subsidies that they never have to pay back, Bennett said. "Mining is actually agreeing to a more commercial arrangement than any of these other industries," he said. "It would be incorrect to suggest there's some sort of special deal here for the mining industry."

Stephen Hunt, the director for the United Steelworkers in western Canada, said deferring BC Hydro payments will help the companies, but there are better ways for the government to help workers.

"The biggest problem is nobody talked to us about it," Hunt said.

The union, which represents workers at five of the affected mines, was invited to the announcement Friday in Williams Lake, he said, but not to consult on developing the plan. "We do more than photo ops in the Steelworkers. We actually do work."

The union's preferred fix is to reinstate a jobs protection commissioner with the ability to have a company open its financial books and work with governments, BC Hydro and labour to find solutions to keep it operating, he said. "Now is the time to bring it back."

The provincial government disbanded the jobs protection commissioner shortly after the 2001 election, even though the office worked well in earlier serious downturns, Hunt said. "I think it's the only way to go. Otherwise [the support] is haphazard."

Adrian Dix, the NDP's critic for BC Hydro, said the province's mining jobs are important, and allowing companies to defer payments for electricity may make sense. "I don't reject it out of hand."

BC Liberal policy has resulted in BC Hydro rates going up by 28 per cent over four years, while at the same time, the Crown utility has an oversupply of electricity from private Independent Power Producers, Dix said.

Kevin Washbrook, a director with the environmental group Voters Taking Action on Climate Change, said that mining boosters overstate the industry's importance to the provincial economy, which is leading the country despite the low commodity prices.

Washbrook said there is regional suffering where mines have closed or slowed, and the government should be looking for ways to help communities transition away from the boom and bust commodity cycle.