The small house in Winnipeg's suburban east Elmwood neighbourhood is still unfurnished, inside walls unadorned, yard nothing but a mud field, as dozens of visitors file up the steps and inside. 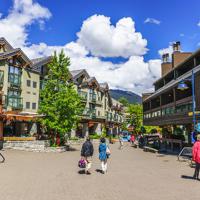 How Canada's Hottest Resort Town Learned to Put Down Roots

An unusual party is getting started, replete with cookies, sandwiches, coffee and juice. Soon the open-concept living room and kitchen are crammed with 25 people who, like a scene from It's a Wonderful Life, step forward one by one bearing gifts to the home's new owners: coffee maker, tool kit, snow shovel and cleaning supplies.

Local dignitaries offer congratulations. One holds out a single front-door key to Paw and Yo, the two adults being fêted today alongside their three children.

To qualify for a Habitat for Humanity home, a family must meet the federal government's standard for "low-income," be employed, not own other property and have a good credit rating.

Habitat for Humanity buys properties, then custom-builds houses on that land to suit approved applicants. To keep costs down, it relies on simple designs, volunteer labour, donations and bulk discounts.

In return, instead of a down payment, adults in qualified applicant families are expected to offer 500 hours of volunteer time -- "sweat equity" -- to construct Habitat projects or do other tasks as a sign of commitment to their future home.

When a family has contributed enough time, it gets to buy a home built for it. In place of a conventional, interest-bearing mortgage, the organization loans the family the market value home price in return for monthly payments set at 25 per cent of the household's gross income, reassessed annually.

It's that zero-interest loan that is in question for some Habitat groups facing soaring costs.

"They've now completed their 500 hours of sweat equity," says John Ruban, past chair of Habitat for Humanity Manitoba, "and are excited to become new homeowners. It gives me great pleasure to extend our sincere congratulations.

"It's very encouraging for us to see a homeowner being so active in building their own housing that provides both pride and stability as homeowners."

The family arrived in Canada nine years ago as government-sponsored refugees from Myanmar. Like many newcomers, they settled into the only affordable lodging they could find -- a cramped, sparsely furnished apartment in a pest-infested downtown building.

"We were living in an apartment where we all had to share bedrooms," 15-year-old Htoosay said after the housewarming party wound down. "There were only two bedrooms for five of us. It didn't feel good to be so crowded.... It feels great having our own rooms now."

The celebration -- known in Habitat for Humanity circles as a "key ceremony" -- is one that has been repeated thousands of times by the worldwide organization, a rite of passage in which donors, volunteers and homeowners honour a family's first home.

Since its founding in Georgia 40 years ago, the charity has built an estimated 600,000 homes around the world, sheltering a staggering three million people -- a population greater than the City of Toronto.

Its first Canadian build, in 1985, led to the creation of the country's first affiliate group two years later in Winnipeg. Since then, the movement has spread to 57 other cities, in every province and territory.

Habitat has now housed 2,700 families from coast to coast, using a tried-and-true model in which first-time homeowners are offered a no-interest, no-down-payment mortgage in exchange for their volunteer time. (See sidebar).

Several decades ago Mark Rodgers, working at the time for an international development charity, moved into a new Toronto neighbourhood. One night, he took a stroll around his subdivision.

"There happened to be a Habitat build," he recalls, "and I talked to some volunteers on the build site. It just happened that the partner family was on-site that evening after working on their home. I saw how engaged the community and partner family was and I thought, 'That is an organization I could really get involved with.'"

As Rodgers learned more about Habitat's financial model -- its affordable homeownership mandate and the social enterprise approach to funding it -- he recalls being "captivated."

"What really gripped me was the incredible transformation the organization makes in the lives of families and their children for generations," he says. The potential led him down a new personal path, to becoming first a vice-president of Habitat for Humanity Canada and then, as of 2014, its president and CEO.

Key to Habitat's mandate, Rodgers says, is the importance of family home ownership and the "huge, transformative implications" that it has for freeing low-income people from a lifelong dependency on social agencies, government aid and charity.

In helping such families find housing security after decades of uncertain renting, while at the same time building their long-term economic security, Habitat's approach is markedly different from most charities.

"It's taking people out of a system where they're dependent on food banks and other social services," he explains, "setting them on course for a very stable future. The underlying philosophy is that our program is a hand up, not a handout."

As Rodgers sees it, Habitat's innovative mortgage model is the basis for its stable history, one that can be trusted by homeowners decades into the future, a longer time-frame than most non-profits can contemplate.

Another key to success for the organization has been its chain of ReStores, non-profit outlets selling recycled and donated home renovation and construction supplies.

"The principle is that the revenue generated there would cover administrative costs and some of the net revenue could go to actual home building," Rodgers explains.

There's also an environmental benefit, he points out: "The product in our ReStores essentially would be going to a landfill somewhere. That's thousands and thousands of tonnes -- it's ghastly to think of how much."

For corporate donors, having a stable and popular source of operating funds raises Habitat's appeal. They know their contributions go directly to building homes for families, not salaries.

When Rodgers became involved in Habitat for Humanity Canada more than 15 years ago, there were only 17 ReStores in the country. This year, the organization is opening its 100th, bringing in more than $50 million in revenue annually, he boasts.

Habitat's Manitoba affiliate meanwhile is expanding the ReStore idea to a new social enterprise: Habitat Handyman, a non-profit firm that uses volunteer contractors and donated supplies to take on small home renovation jobs around Winnipeg that are often too small to be worthwhile for commercial contractors.

But innovative cash flow is only one half of the balance sheet. Decades in non-profit real estate gave Canada's Habitat affiliates early warning of an emerging problem: land costs rising faster than average incomes.

And it's not only happening in big cities. Saskatoon's Habitat affiliate has watched average house prices in that city climb 140 per cent in the last eight years.

When Barb Cox-Lloyd became the Saskatoon group's CEO in 2009, its traditional focus on building single-family dwellings was becoming increasingly difficult to execute. "It's just not feasible for us to be building single family houses with the price of land being as steep as it is," she says.

In response, Cox-Lloyd says, Habitat Saskatoon "started building duplexes, because of the availability of land. And now we're moving to multiplexes. We're even looking outside the city, forming chapters in smaller communities."

But that, says Habitat for Humanity Manitoba CEO Sandy Hopkins, doesn't address the underlying problem: that wages haven't kept up with leaping land costs, leaving more and more of his organization's resources tied up in ever-larger and longer individual subsidized mortgages.

The income-tied mortgage payment model "was conceived in an era when a house cost $60,000, and families with the lowest incomes could pay them off," Hopkins says. "Today a new house in Winnipeg is $300,000. But the salaries of families have not gone up five times -- not even close."

The squeeze faces his affiliate with big questions about the future. "Do we scale back and batten down the hatches?" Hopkins asks. "Or do we become aggressive and move even more into the social enterprise market?"

The alternative -- to do nothing and continue the status quo -- means being able to build fewer and fewer houses as land prices climb.

"That's really not sustainable," Hopkins says. "So the question becomes: when does a 'hand up' become a 'handout?' Arguably, an interest-free mortgage for 50 to 60 years looks more like a handout."

In response, Hopkins' Manitoba affiliate is moving to reduce the terms of its interest-free mortgages to only 15 years. By then, most families should have improved their equity in their Habitat-built homes substantially, and will be expected to obtain a conventional mortgage.

Although Habitat branches are autonomous, the move has some in the Habitat movement decrying what they see as a betrayal of its original vision.

But Hopkins stands by the decision. The new rule, he says, "is our choice. Others may choose differently across the country, depending on the interest and appetite of each organization. As with any idea that changes the status quo, there are some people who embrace it quickly, and others who are more dead-set against it."

Will the move see low-income families kicked to the curb if, through misfortune, they don't qualify for a mortgage in 15 years?

"Our intention is to be fair with everyone," Hopkins says, "and to always err on the side of the family rather than commercial interests."

At least four other local Habitat affiliates are moving in the same direction as Manitoba's. But national CEO Rodgers insists the Canada-wide organization isn't about to implement Winnipeg's step back from indefinite interest-free mortgages -- yet.

"At this point, it's just something we're exploring," Rodgers says, "we still have to put our minds around it a little more. We never would want to jeopardize the future of our families."

Hopkins counters that part of Habitat's success has been its financial stability: how revenue from no-interest mortgages, once initial land cost is paid off, finances further land purchases.

"It's the best business model I've ever seen in any organization, for profit or not-for-profit, in all my years in business or my consulting days," Hopkins beams. "Prudently managed, the organization will go on forever."

That goal, at least, crosses the divide over how long Habitat's 'free' mortgages can remain that way.