Ski instructor by winter, baker by summer, Laura Cofell remembers her first Whistler vacation decades ago. Like many who visit, she was enamoured. 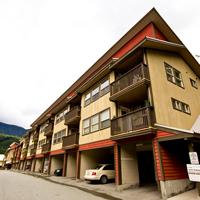 Answers to Affordable Housing Are 'Everywhere'

"I never, ever wanted to leave," the 35-year old recalls. So in 2002, after she finished college, she took a job at the mountain's ski school "to live the dream."

She lucked out. An Ontario friend connected her with someone who'd let her crash at their place until she got on her feet in the resort community. Within weeks, her host saw a room for rent on a pub's message board and soon she was lodged in a "tiny room" in a shared house.

Not everyone who toils in Whistler's bustling restaurants and bars, classy hotels, municipal government services or out on its snowy slopes has been so lucky.

The 1990s saw a burst of interest and investment in the economic powerhouse -- which generates a $1.27-billion gross domestic product, equivalent to some Caribbean nations -- and housing prices began to climb drastically. Land values and rents ascended faster than a high-speed quad chair, and owning your own home was simply out of the question for most employees.

"I was really lucky," Cofell admits. "It's expensive and a lot of people work seasonally. A lot of people have a couple months off in the spring or fall, and if you don't have money coming in it's hard to cover your costs then.

"I don't know how anybody could pay the bills and eat with some of the wages that people earn here."

'We needed to intervene'

Five years before Cofell's arrival, the municipality set out to tackle an obvious crisis looming on the horizon. As Vancouverites puzzle over solutions to our sizzling housing prices, they might be wise to heed the ski resort's fresh tracks.

"The cost of market housing had gone out of reach of what most local incomes could afford," explains Marla Zucht, general manager of the Whistler Housing Authority, "and a lot of residents and employees in our community were being pushed out of the marketplace."

Whistler needed to act, and if it wanted to offer a well-staffed, world-class resort to the world, it somehow needed to retain the staff those rely on. In 1997, as international visitors poured in, the municipality created Zucht's organization. As a subsidiary of the Resort Municipality of Whistler, the Whistler Housing Authority was given little direction, just a mandate to increase affordable housing for local residents and staff.

They started with subsidized rental developments, a tried-and-true solution to overpriced housing, but soon faced another aspect of the problem: high levels of transience, as seasonal resort staff simply couldn't afford to put down roots.

How could you both cut the costs of lodging, but also entice people to call the community 'home' instead of ending their lease and leaving at seasons' end?

"We needed to intervene in the market," Zucht says.

About a decade after its inception, the Housing Authority came up with a new idea. It began to set aside a portion of its properties in the community for residents who didn't own other real estate, and to place permanent covenants on those units.

The first rule prevented wealthy outsiders from snapping up the properties as part-time ski vacation homes. The covenants restricted the maximum amount for which buyers could resell those housing units above what they paid.

That amount was initially tied to Vancouver land prices, but as the Lower Mainland saw its own real estate boom, Whistler risked losing its affordable stock in the price updraft. It switched to a more measured and predictable standard: Canada's Consumer Price Index.

The change in covenants irked some residents who'd been eying their home equity in light of Vancouver's soaring standards. The switch to the CPI index defused things to an extent: home values could still grow -- just not explode.

But the perception that owners take all the down-side risk of their properties falling in value, while the covenants cap their ability to profit from rising prices, continues to turn some buyers off.

Considering how far the Authority is from its goal of one day housing three-quarters of Whistler's resident workforce however, those purchasers have plenty of market properties to choose from -- just not on the WHA's advantageous terms.

One of the people behind the agency's innovation was Tim Wake, who explains that its gradual learning curve and changes of direction over the years were a result of having a "small, nimble and effective" organization that understood how financing worked for land acquisition and developments.

"One of beauties of the housing authority in Whistler was that we didn't have a big bureaucracy," he recalls. "We could get things done."

As a pilot project with few parallels in Canada, he took a "go slow" approach to test and improve the model.

"When we started in Whistler, we didn't start with 300 units -- we started with 10 to 20 units," recalls Wake, the authority's first Housing Administrator and later its general manager. "But in 12 years, we ultimately built 1,000 affordable rental and affordable homeownership units."

Most, he said, were two- and three-bedroom townhouses, although the agency's stock includes other forms. In 2005, Wake ran successfully for election and served a three-year term on Whistler Municipal Council. But he continued to be involved with his brainchild as a board director until 2009.

But could the Whistler Housing Authority model work in unaffordable Metro Vancouver?

Although Wake's own efforts to attract the city's interest never bore fruit, with Vancouver now facing its own threatened talent flight, he argues that Whistler's bigger neighbour ought to take another look.

"Literally the only way to intervene in that market is to purchase land that is forever taken out of speculation in perpetuity," he says. "Otherwise there's always going to be speculation and the price of land is going to fluctuate according to supply and demand -- that's what speculation's all about.   "If the city partnered with the federal government, say, to purchase land and set it aside for affordable housing, the city could zone that or through a restrictive covenant take that land out of speculation to create an innovative development model."

In fact, City of Vancouver staff are quietly studying the Whistler model, sources in the administration confirmed, alongside other alternatives as part of the mayor's direction last June to research "entry-level homeownership models to support young families who live and work in Vancouver."

Making it work to stay

Currently on maternity leave with her nine-month-old son, Cofell partly credits her 14-year stay in Whistler for finally being able to afford a home. It wasn't easy: she rented, held down three jobs for at least five years, saved up, and got on the Whistler Housing Association waiting list for a suitable place of her own.

"I realized it was attainable if you worked hard," she says.

Sure, that sounds like a Whistler variant of the American Dream, but without the resort's homeownership program, it would have been outright unimaginable for even the hardest-working employee there.

"I wouldn't have been able to afford hardly anything here," she says. "Whistler Housing Authority definitely got me started. The concept was definitely a bit unusual to comprehend at first. Definitely a lot of people were talking about it who lived here."

Through the program, she bought a cozy 671-square foot, one-level condo. And inspired by seeing many other young families "make it work to stay in town," she and her husband eventually bought a 1,500-square-foot, three-level townhouse with a yard, also through Whistler Housing Authority. They moved in last Thanksgiving.

She's thankful for finally being able to have green space of her own to enjoy -- but most importantly, to be able to raise her child in the community she fell in love with years earlier.

Another local who benefited from the authority's homeownership model is Chantel Jackson, a financial advisor in her mid-thirties. She's worked in Whistler for 12 years, but for stretches has had to commute from neighbouring cities because of high housing costs.

"I always felt I'd own a home," she says. "But it was just a matter of what and where."

Her dream was to actually live and work in the same community, to build her own house, and raise a family. Thanks to Whistler Housing Authority, she and her husband were able to do just that, and are raising their two-and-a-half year old.

"Whistler Housing Authority gave us the ability to build our home here," she says proudly. "To live the dream of still being in Whistler is really incredible. We're hoping it will be our forever home."