"The time has come: if you kill a worker, you go to jail." 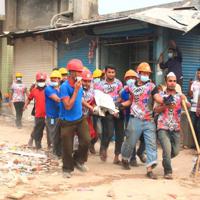 Canada Should Treat Workplace Deaths as Seriously as Bangladesh

In a historic court ruling on Monday, a judge sentenced Metron manager Vadim Kazenelson to 3.5 years in prison for the deaths of four workers who plunged 13 storeys when their scaffolding failed outside a Toronto apartment building on Christmas Eve, 2009.

It's the first jail-time meted out under Canada's so-called Westray Act, which amended the Criminal Code in 2004 to ensure that company managers could be held accountable in cases of "grave moral faults."

For Neumann, Monday's sentencing, which still faces appeal, "is going to set a precedent that employers better start paying attention: you can't compromise safety," he told The Tyee in a phone interview.

Neumann cited two B.C. sawmill explosions as an example of the need for more criminal prosecutions of employers. In Burns Lake and Prince George, separate incidents that killed four workers and injured 42 more.

A coroner's inquest jury that examined both incidents deemed the cases accidents. But on Tuesday, employees at both sawmills launched a class action suit against WorkSafeBC alleging the provincial agency was negligent in inspecting the plants and investigating the incidents. The case has not been tested in court.

The fact that Monday's sentencing was the first-ever of its kind under the Westray Act in its 12 years of existence shows there is much more work to do on workplace safety, Neumann said.

Here's what else Neumann had to say about the struggle to prosecute negligent employers and managers in Canada, the recent sentencing decision, and other developments in his union's long campaign for justice. Our interview is edited for length and clarity.

Ken Neumann: It's taken a long time to bring this thing through the proper court proceedings… We see this as a victory simply because of the fact that since the Westray Act came into law, it's not been properly enforced.

There's an excess of 9,000 workers who have lost their lives -- but not a single boss had gone to jail, this is the first since this law came into place -- since 2004. We finally think we're making some headway and get the attention of prosecutors, the RCMP, the public, and most importantly the employers. We view this as a new day going forward.

In 1992, 26 miners got killed. At the time of that accident, the Steelworkers were actually involved in an organizing drive [in the Westray mine], because workers were concerned about their health and safety. But unfortunately, we got there a bit late -- in the process of the organizing drive, the mine exploded and obviously shut.

We've taken on that cause, because we made a commitment to the widows of those people in that disaster: we're going to fight for their cause. It took us 10 years to get the law passed. But since 2004, it has really not been effective. That means the campaign [continues] to stop the killing and enforce the law. People are starting to pay attention to it.

[This week's] sentencing is going to set a precedent that employers better start paying attention: you can't compromise safety, which has to be the utmost for workers.

Why do you think there are so few people in prison for thousands of workers' deaths? Is there a reluctance to prosecute?

Maybe the attorneys general are not treating industrial accidents similar to other activities, for example hit-and-runs or drunk driving. They tape those off and do a criminal investigation. It's not quite the same treatment you get at a work site when someone's killed. Usually, [if it happened] in a mine, the companies try to push to get production back up and running. That's one area we're trying to convince the Crown they have to give the tools to inspectors and police to do proper investigations.

Sometimes when you're up against these big global companies, they've got deep pockets. They've got access to the best litigators, and they can drag these things [through] the courts. I think sometimes the Crown may not be properly resourced. But there should be no excuse for that. A wrongful death is a wrongful death. Money should not become an issue because you've got to get justice.

What would you like to see the federal government do to ensure these [events] are treated as crimes?

The federal government has to encourage its attorney general to give police authorities the proper tools and training when it comes to industrial accidents. That's the message we've been sending to the attorney general and the [provincial] attorneys general across the country. We're not suggesting for a moment that, of the 9,000 workers killed since 2004, each and every one was a case of criminal negligence under the Westray Act. But I'm confident that there are a lot more people that have been involved who have not been properly prosecuted or investigated.

Is there one incident that really woke you up to this fight, that hit you hardest?

There are many accidents we've had, but I keep going back to Westray. That's what really brought this law about -- the tragedy, the complacency, the corruption.

I was around in 1992. Our union was so close to it, and I was involved with the early Westray [mine unionizing] campaigns. I had the opportunity to go back to the Westray monument on the 20th anniversary. I'll never, ever forget one young woman I met who was waiting for her dad to come home that day, because it was his birthday and they had a cake they'd prepared for him. The unfortunately reality was her father never did make it home, and she never had another opportunity in her lifetime to celebrate his birthday.

When you go back and meet the widows… you hate going back, regurgitating the fact that we continue to campaign, and reopening old wounds and memories. Even though you may go through tears at the beginning, because of these terrible fatalities we have laws passed that may prevent these things in the future. We're going to continue to fight in the name of their loved ones, to make [Canada] a safer and better place to work.