It's a complicated world, with an economy that's particularly hard on young people. Nearly half of Canadians between 20 and 29, once prime nest-leaving age, haven't quite launched. They still live with their parents. 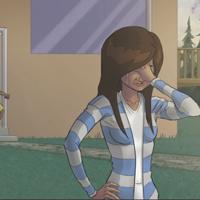 'Aging Out': Tough Road for Teens Too Old to Be 'In Care'

So how does that work if your parents, legally speaking, are the Province of British Columbia, and their support -- and shelter -- ends abruptly at the age of 19? Often, not well. Today close to half of the 8,000 homeless youth in Canada once lived in either foster or group homes.

''Every one of us, when we moved out on our own, when we started having to do everything ourselves, we had people we could ask: how do I do my taxes? How do I make a cake?'' said Simone Maassen, manager of youth services at Abbotsford Community Services, which offers programming for vulnerable youth.

''That's really the piece that makes a transition [to independence] smoother -- if young people have other people in their life.''

And it's a piece that organizations like hers are tackling. Maassen's Abbotsford Community Services, for example, works with youth in foster care before they age out, to build life skills and self-confidence while helping them identify goals and make plans to reach them.

It's one of a number of organizations whose work runs counter to more common stories of the system failing to prevent another tragic death, or journalists like me pointing out, again, how many graduates of the foster care system wind up homeless. (Disclosure: many of these groups receive funding from the Vancouver Foundation, which is also among the funders of the Tyee Solutions Society. See full statement at end of the story.)

Clara was unsure she wanted to join the Culturally Relevant Urban Wellness (CRUW) program when it began in Vancouver back in 2011.

Clara -- not her real name -- had been with the same foster family since she entered government care as an infant. Growing up in Surrey, she had little connection to her Secwepemc birth culture and had only visited her Adams Lake reserve, near Kamloops, a few times.

A collaboration between the Vancouver Aboriginal Child & Family Services Society (VACFSS), the UBC Farm, and Thunderbird Community Centre, CRUW started by taking 30 youth -- two-thirds indigenous youth in care, one-third low-income newcomer youth -- to the UBC Farm every second Sunday from March to October. There they worked with elders and in teams to grow, harvest, and prepare traditional Musqueam medicines and edible crops.

Clara's social worker suggested she join. But playing outdoors in the dirt was not a definition of fun for the then-15-year-old.

''I was that little girly-girl that didn't want to be outside,'' said Clara, now 18.

But her foster parents, and knowing a friend was also signing up, convinced her to try it once. That's all it took.

''I got to really connect and find out more about the other participants and their experience and journeys though foster care,'' Clara said.

She also got to connect with indigenous elders, who started to fill a hole in her life that she hadn't known existed. ''They taught me traditional medicines. They shared their knowledge, experience of when they were in residential schools, their traditional ways in life, and I followed that. That's when I started to accept my aboriginal culture,'' she said.

Clara loved CRUW so much she became one of a dozen or so alumni who took part in a pilot Life Skills & Leadership program that winter. It prepared them not only for the practical responsibilities of adulthood such as banking, cooking, and filing taxes, but also to mentor youth like themselves during the next summer's CRUW program.

Clara hadn't considered mentoring before a CRUW facilitator suggested she'd be good at it. And after that, youth not much younger than herself told her during CRUW's second run that she was an inspiration to them.

''That shocked me because I thought I couldn't make a difference in somebody else's life, but I did,'' she said. ''That's when I found out that I wanted to become a youth worker.''

Without CRUW, Clara probably wouldn't be enrolled in post-secondary today, she said. ''I didn't know exactly what I wanted to become.''

The question, ''What do you want to be when you grow up?'' takes on a sense of urgency when you're a teenager. The sand trickles through the hourglass even faster for kids who lose their home and everything that goes with it on the day they turn 19.

With high school graduation rates among foster youth in Canada running between 20 and 40 per cent, far below the national average of 81 per cent, the odds are stacked against former kids in care getting any job, let alone a well-paying one. And without a job or a place to go, many youth exiting care have nowhere else to go but the streets.

Led by St. Leonard's Youth and Family Services Society, the pilot project enrolled eight vulnerable kids who were missing class in a weekly computer lab from January to June this year. They learned coding applicable in industries like website development, digital animation, and music production.

''The tech industry is always needing people. But [it's] not one that some of our youth think of going into,'' said Alison Grauer, St. Leonard's director of youth and residential services. ''We thought we could give them a new experience.''

Best of all, the program counted as credit towards high school graduation, which many were in danger of not achieving because of their spotty attendance.

When they weren't working on building a website for Innovation Lab together, the teens went on field trips to local industry headquarters like Launch Academy, a hub for local business start-ups, and Bardel Entertainment, a digital animation company working on popular TV shows like Teenage Mutant Ninja Turtles and Rick & Morty.

While the program excited participants, some had trouble sticking with it. St. Leonard's youth worker helped. ''He even did things like take transit with one of our youth who had such severe social anxiety he wouldn't venture out into the community,'' Grauer said.

'I saw her whole being get happier'

Sue Dorey, manager of Burnaby's district-wide Safe & Caring Schools initiative, helped St. Leonard's pick some of the participants. She's never seen an alternative program so successful, she says. ''We put together the program and the attendance rate was 100 per cent.''

Success means something different for every kid in care. For those in the Youth Innovation Lab, it could be showing up every Friday and offering support to the next cohort of youth coming through the program. To see kids who ''want to come back and maybe be a peer mentor [or] leader,'' said Grauer, ''was pretty wonderful.''

For 16-year-old Sajedeh, success came on a bigger scale. When she arrived in Richmond from Afghanistan alone four years ago at the age of 12, Sajedeh was put immediately into foster care. Her first placement wasn't a good fit, and she spent most of her spare time alone in her room, depressed.

When Sajedeh was placed with a new foster mom, Claudette Roy, a year after coming to Canada and she started to come out of her shell.

''Claudette was the best thing that happened to me after that year,'' Sajedeh said. ''In school I was more open to put myself out there through extra-curricular activities because I knew at home I have somebody who's going to support me.''

Sajedeh had tried competitive swimming and was competing with her high school's dance team when she heard about the Young Starters program offered by the non-profit ArtStarts in Schools.

Originally designed to ''empower young people to make decisions through an art-based approach,'' says its creator and program manager Elfred Matining, Young Starter's sophomore season earlier this year was directed specifically at kids aged 13 to 18 with experience in foster care.

Youth learned the basics of drawing, painting, and sculpture, but also how to ''concentrate on collaboration, creativity, and community,'' said Matining, while they created their own art as well as a giant collaborative project. All were later displayed in ArtStarts in Schools' gallery in downtown Vancouver.

Working artists, most of whom had either foster care or social work experience, provided mentorship. Guest speakers engaged the teens in slam poetry and visual narrative creation.

Sajedeh took to slam poetry immediately. Even though English is her second language, she gave a first public performance at a youth slam poetry competition in Vancouver, placing fourth.

Her final project, a painting of the iconic National Geographic cover photo of a young Afghani woman, earned her the national Fresh Voices Artivism award from the Vancouver Foundation, Telus, and the Michaëlle Jean Foundation. Former governor general Jean was so impressed by Sajedeh's story that she arranged to meet her.

In the short-term, Roy says she's noticed the difference the Young Starters program made in her foster daughter. ''I physically saw her lose stress and tension. I saw her whole being get happier.''

Sajedeh has noticed, too. Previously she planned to study political science in order to advocate for the rights of women and children in third-world countries.

''However, art changed the direction of lots of things,'' she said. ''I realized that if I want to make a change someday in anyone's life, or even my own life, it doesn't have to include politics necessarily, and I could do it through art just as well.''

Plans for a healthy transition

Later this month, CRUW's Clara turns 19, the date when all the foster care support she is legally entitled to ends. But thanks in no small part to that program, she's on the path to a healthy transition out of care.

Clara has a part-time job as a youth worker with CRUW, balancing that with volunteering at the Britannia Community Centre and taking BA studies in child and youth care at Douglas College. She's already finished the college's one-year aboriginal child and youth care diploma program.

Clara's dream is to return to her Adams Lake reserve as a youth worker while simultaneously taking classes at Thompson Rivers University to study her Secwepemc culture.

''Getting to know my culture and my language, my dance, my music, my foods, everything,'' she said. '' 'Cause I feel like that's a really big part of myself that I'm still missing.''

And unlike many of her foster peers, she won't have to worry about where she'll be living meanwhile. Clara's foster family is letting her stay on in their house, which has long since become her home, too.