Syrian refugee Thumn Al-Rawe is beating odds in more ways than one. 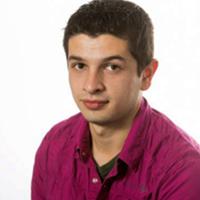 How Can Canada Meet Its Refugee Goals? Ask Migrant Youth

Al-Rawe's family left their home in Iraq for Syria in 2005 after her father was kidnapped and later released. She was seven years old.

In 2012, a year into Syria's ongoing civil war, Al-Rawe, her parents, and three siblings left Syria and arrived in Vancouver as refugees. Today the family lives in Surrey.

''I love school, I love studying,'' said the now 17-year-old Grade 12 student. While English Language Learning (ELL) secondary students like Al-Rawe spend an average three and a half years in ELL classes, she finished all six English levels in one year.

Al-Rawe excelled in non-ELL academic classes, too, getting As and Bs on her report card. Any free time she has left is spent volunteering with school committees, the City of Surrey, and helping other newcomers adapt to Canada.

''All of this stuff, I've done it to improve myself,'' she said. ''My sisters and I, we're trying to make our parents very proud of us and get the education that they couldn't have.''

B.C. is expecting 3,000 Syrian refugees to land in the province by early next year -- an estimated 1,000 of which are under 19. But researchers and settlement service staff warn success stories like Al-Rawe's will be difficult to achieve without more teacher training and resources.

Chris Friesen, director of settlement services for Immigrant Services Society of British Columbia, says supports for refugees in school districts all over B.C. have been examined and found lacking.

While additional supports are needed ''especially outside the Lower Mainland'' where immigrants don't typically settle, Friesen says administrators and educators within the region are telling him they need more money for training and resources to help refugee youth, too.

''Refugee'' covers a broad range of education levels, from middle-class students who've never missed a day of class to people who grew up in refugee camps and lack literacy skills in any language. Trauma can further complicate their school readiness, too.

Most Syrian refugees are expected to stay in Lower Mainland cities like Surrey, Burnaby, and Coquitlam. Others could end up outside the Lower Mainland, especially if they're reuniting with family already in B.C.

B.C.'s education ministry uses a per-pupil funding formula to cover ELL and other supports for students who need them, including refugees. A ministry spokesperson said the government will carry out a pupil count in February 2016, and will reallocate funds for new students by April.

The government says it doesn't track how many school-aged refugees are currently in the province. Districts can identify refugee students in their funding applications, but they don't have to, and students' immigration status can change.

University of British Columbia literacy and language education researcher Lee Gunderson has been studying refugees' education outcomes in B.C.'s schools since the 1990s. While achievement varies by student, Gunderson says refugees typically do worse in school than their immigrant or Canadian-born peers.

''The disappearance rate is very high, meaning they disappear from schools and school districts,'' he said.

A study Gunderson conducted with the education ministry tracking 1,300 refugee youth from their enrollment in B.C. primary schools in 1993 to 1995 until their expected graduation date in 2009/10, revealed the ministry had lost track of one-third of the students.

''They were simply gone from the system,'' he said. ''The ministry called it 'out-migration,' and they assumed that 80 per cent of that out-migration group would graduate. And I have argued, 'Well, there's no way to know.'''

English and good grades didn't come as easily to Dina Ganan, a refugee from Colombia who came with her family to Surrey in 2007. Now 20, Ganan spent four years in ELL courses, some of which she believes were taught by teachers who weren't trained in ELL instruction. Outside of school, she barely had time to keep up with her studies because she was her parents' English interpreter.

''Everything my parents couldn't do I had to do for them because of the language barriers,'' she said.

UBC language and literacy education prof Sylvia Helmer says not all teachers working with ELL students in B.C. are properly trained. It's only been three years since UBC made it mandatory for teacher candidates to take one ELL training course, and it's still the only teacher education program in the province to do so.

''I'd like to see a whole load more people trained, for sure,'' Helmer said, adding most schools have some ELL-trained teachers but not enough to accommodate current or anticipated needs.

Secondary students with little English training are often segregated in ELL courses, which the province funds for a maximum of five years per student even though it takes up to nine years to master the academic language required for high school courses. Even after finishing ELL, students still need English help that the majority of the provinces' teachers aren't trained to provide.

Doug Strachan, communications services manager for the Surrey district, admits it's possible for a student to have a teacher without ELL training. But while they might not have degrees or university credits, many teachers have ELL professional development courses under their belt, he said.

Workers at settlement centres in Burnaby and Surrey, the first stop for immigrant and refugee families arriving in both school districts, deny untrained teachers are an issue.

''I've been working as a settlement worker since 2007,'' said Natalya Khan, cultural transitions coordinator at Burnaby's Welcome Centre. ''I have never heard any complaints from parents saying the teacher is not trained enough or 'we don't think our [child's] language needs are met.'''

Helmer was teaching in the public system when B.C. took in some 7,500 boat people from Vietnam, many of them deeply traumatized, in the late '70s and early '80s. ''Kids spent the first year bouncing off the walls and then after that they could actually get down to learning,'' she said.

''They were trying to figure out who they were, where they were, and deal with the trauma -- and often the guilt, because they survived and their friends didn't.''

Both Vancouver and Surrey have special programs to help some at-risk students adjust to school culture. ''Our goal is to integrate them into the larger school community,'' said Caroline Lai, manager of Surrey's Welcome Centre.

''Usually when they're 18 years old, they'll come back to see us. We have another program that we partner with our adult education,'' said Lai. ''We get them on their adult graduation path as well as helping them with work experience.''

Time is running out

Ganan says she had teachers in her Surrey school ask if she knew former Colombian drug lord Pablo Escobar. She also criticized a social studies teacher who presented a slideshow on global trade identifying cocaine as Colombia's major export.

''Have the teachers and school staff provided with anti-oppression, anti-racism, and cultural awareness [training],'' she said, emphasizing a recommendation that comes directly from the Vancouver Foundation's Fresh Voices Youth Advisory Team, which Ganan is a part of.

Mentorship programs established between older, more settled immigrant and refugee students with younger, newer students could help acclimatize them to their new reality, she added.

But Lai says the district already has Connect Through Reading, a mentorship program that pairs older immigrant and Canadian-born students with Grade 6 and 7 students to help them read English and prepare for high school.

''So that when the Grade 6s and 7s do go to high school, they'll feel a little bit more comfortable and know somebody,'' she said.

Ganan said mentors from a similar cultural background are most helpful, but noted making friends outside ELL classes is also a challenge refugee students face. Al-Rawe agrees and suggests schools get immigrant students involved in extra-curricular activities to end the segregation.

But districts are running out of time to prepare. Refugees are expected to start arriving in B.C. by January, which will test districts' capacity to absorb new students with highly specialized needs.