Until last week, Canada's federal government had appeared indifferent to the crisis forcing over 12 per cent of Canadian households to spend 30 per cent or more of their income on shelter -- what the government's own Canada Mortgage and Housing Corporation (CMHC) calls being in "core housing need."* 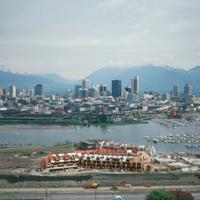 Back When: The Past, Present and Future of Canada's Housing Agency

The outgoing Harper government wasn't the first to turn away from the issue in the decades since the 1970s-era Pierre Trudeau Liberal government declared housing a human right and helped build hundreds of thousands of social housing units.

Since then, successive governments have frozen spending on social housing, downloaded that responsibility to the provinces, and in 2014 began letting funding for co-ops and indigenous housing that Ottawa had helped to create expire, leaving hundreds of thousands of Canadians worrying about the fate of their affordable housing.

If Canada's new Trudeau Liberal government stays true to its campaign promises, however, that era of indifference may be coming to an end.

The Liberal platform included promises to renovate existing and build new social housing, maintain subsidies for co-op housing, and provide tax breaks for new private rental units. The party has also committed to making $20 billion in infrastructure investments, with some of that directed through a new Canada Infrastructure Bank and the CMHC to build low-to-moderate income rentals.

Housing will compete for the new government's attention with other pressing issues, from inequality to the environment to the economy. But expect affordable housing to take a front seat, said Adam Vaughan, a re-elected Liberal MP who served as housing critic in the last Parliament.

"It forms a centrepiece at the heart of our campaign platform," he said. "It's a full-spectrum approach to get back into the game of managing the housing market in Canada."

Vaughan said that CMHC's mortgage insurance role, which generates billions in annual revenues, would continue. But he wants to see more of those revenues funnelled directly back into housing Canadians, particularly in new and existing public housing, co-ops and the non-profit sector.

"It's clear there need to be reforms to the CMHC," he said, "and a strategy to create rental housing as well as pathways to homeownership for first-time buyers."

'Back in the game'

Nonetheless, it falls short on specific targets or particular attention to the needs of vulnerable groups such as indigenous people or women, she said. Both were in the New Democratic Party's platform, Gurstein noted, "so that's a little worrying."

On the other hand, Gurstein said she is buoyed by the Liberals' promise to pursue a national housing action plan to improve Canadians' accommodation options over the next decade.

"I do think that [the Liberals] get that there is a need for housing policy beyond home ownership, which is what the Conservatives were doing," Gurstein said. "That is very positive."

It may take a while before any Liberal changes are reflected in super-incendiary housing markets such as Vancouver or Toronto, the UBC professor said.

Gurstein said she expects municipalities will "have the ear of the Liberal Party," in a way they haven't for the last nine years of Conservative government.

'Keep money in the system'

After surviving last week's voter stampede to the Liberals, she plans to introduce a motion in the House of Commons pushing the new government to act on its campaign promise to renew funding for existing social housing, an item that also appeared in the NDP platform.

"We have to keep the money in the system, and then we have to sign new agreements so people can keep getting their rent subsidies," she said.

She also suggested the NDP could nudge the Liberals to keep their word on a national housing strategy by re-introducing Bill C-304, first introduced by-then NDP MP Libby Davies in 2009, which called on the CMHC to consult with provinces and indigenous leaders to create such a strategy.

Boutin-Sweet would like to see the Crown corporation, which until this week reported to Conservative MP Pierre Poilievre, return to its original mandate of helping Canadians obtain and keep affordable housing.

"Also, if the CMHC could help encourage sustainable housing construction, that's looking after our environment, as well as jobs and housing for people," she said. "Those are basic things that we really need to do."

Like the Liberals' Vaughan, Boutin-Sweet said she thinks funding could come from revenue the CMHC receives from insuring mortgages.

But Jody Ciufo, executive director of umbrella group the Canada Housing and Renewal Association, said her members hope for more than simply the renewal of federal support agreements "encumbered by red tape."

"The end of operating agreements itself isn't bad. We don't want the same old system we had before," she said. "What's bad is the end of federal funding. What we want is the federal funding to continue providing housing, that would allow building more units, and together we'll figure out a better way of doing that."

Although Canada's new Liberal regime hasn't yet taken the reins or assigned cabinet posts -- that will come Nov. 4 -- Ciufo shared Vaughan's optimism that housing will be a leading issue.

"I think we're poised to make some real progress in this country," she said.