A shared basement kitchen was at the heart of a Winnipeg church's promising conversion into affordable housing a year ago. It was the first space in the church to be renovated, and a year later one of its most-used fixtures. 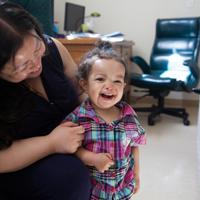 A Foot in the Door: Millennial Families Priced Out of Cities

For many who live in the WestEnd Commons -- a financially struggling inner-city Anglican church that transformed itself into 26 units of mixed-income affordable housing -- sharing food is the centre of their community, whether it's weekly communal cooking sessions, or monthly potlucks in the central courtyard.

One resident who attended almost every meal and group meeting was Oanh Pham. The 33-year-old mother shared a suite with her daughter Hannah, who is nearing two. In June, Pham shared her experience of searching for housing with Tyee Solutions Society.

Just over a month later, on July 30, Pham was struck by a dump truck and killed while walking to her volunteer co-ordinator job at Siloam Mission, a humanitarian organization serving Winnipeg's homeless.

Today, Pham's parents are raising Hannah, but they've brought her back to the historic church building for a street party and barbecue -- they know the close connection she shared with the children and families there.

As Pham recounted in an interview two months before her death, the pair lived for years in insecure and crime-ridden public apartment complexes. In WestEnd Commons, little Hannah finally learned to trust her neighbours.

Two months after Pham's death, the surviving residents of the building continue to mourn. But they're also reflecting on what she offered the fledgling community. Pham, they realized, was a reminder that affordable and secure housing is about much more than a roof over your head or a government funding agreement, as important as those are.

Truly secure housing is about creating a healthy and supportive home. And that requires warm community and hard work.

"It's a big loss not to have her in the community anymore," said Erika Frey, a young mother living upstairs from Pham. "She was very instrumental in the building."

The two became close friends soon after moving in within weeks of each other in 2014. Despite their different household incomes, both struggled to find child care in the neighbourhood so that they could work.

For several days every week, Frey and Pham would drop their child off at the other's apartment. They began approaching nearby organizations to propose a new daycare program to address what they saw as an obvious need in the low-income neighbourhood.

Their efforts paid off: they discovered a local women's centre was planning a new daycare, and found assurance that WestEnd Commons families could get spaces there.

But it was the community kitchen program every Tuesday that really excited Pham, Frey said. The two attended regularly, learning to cook food from many cultures. After cooking, everybody would eat together.

"Oanh could see how important that space was," Frey recalled. "It was not just about having a meal on Tuesdays. It was an opportunity to teach each other, and sharing stories from our own life experiences and families."

As with most drop-in programs, the community kitchen depended on money -- funding for food and supplies, and a budget to pay a part-time staff co-ordinator. When the funding ceased, Pham wouldn't let the project stop. She decided to lead a session herself and make food from her own Vietnamese background.

"Her role modelling inspired the other people from different cultures to serve their recipes and share their own knowledge," Frey said. "We all learned that we have more things in common as newcomers and First Nations than we had thought.

"We couldn't all provide all the ingredients for each session -- we're cooking for 20 to 25 people -- but at least we could provide the role of facilitator and our more cultural ingredients. Even if we had absolutely no funding to do something like that, everybody brings what they can."

'She made a difference'

Oanh Pham's 31-year-old sister, Uyen Pham, said her older sibling always had a "drive to get things done." But despite facing a series of setbacks in her adult life, particularly in finding suitable and safe housing in which to raise her daughter, Oanh wanted to use that drive to help others.

"She volunteered a lot of her time," Uyen said of her sister. "At the end of the day, she could go home knowing that she'd made a difference in someone's life."

So when Oanh and Hannah were accepted to move into the new WestEnd Commons last year, she was exhilarated. Oanh always invited Uyen to join them for community kitchen or potlucks and to meet her new neighbours.

"This was more about community than just an apartment complex," Uyen said.

According to Jenna Drabble, the WestEnd Commons manager and community connector co-ordinator, the goal of the project from the outset was to become a community where residents could know their neighbours and feel supported, safe and included.

"It would be more than just the bricks and mortar of housing," Drabble said in an email. Pham fit right into that vision, she added, by building a "special relationship" with most of the building's tenants.

"Every community needs people like Oanh in order to thrive," she added. "Oanh had a good understanding of what it takes to create a strong community: hard work, patience, presence and of course kindness -- all of which seemed to come naturally to her. Her absence is deeply and profoundly felt by everyone there."

One time, Frey said, Pham hosted a workshop for other building mothers about healthy parenting, inviting in a facilitator from a post-partum program she once attended.

Frey remembers one of the last community activities that she and Pham participated in together. Parents and children all made little cement hearts, and the plan was to place each heart outside when a new outdoor play area is completed this fall.

The community's been referring to the new area as the Elders' Space, but discussions are afoot to name the playground in memory of Pham and to place her and Hannah's little hearts there.

It will serve as a perpetual reminder that housing is about community. And community is about heart.

"Here, we check on each other," Pham said in her interview this summer, hugging Hannah as her daughter giggled in their brightly-lit new home. "If someone is sick, especially the kids, we make sure they're taken care of.

"When you're in apartment housing, you kind of keep to yourself. None of us lived like this before. But this is how life should be."