According to the Vital Statistics Act document entitled ''RETURN OF DEATH OF AN INDIAN,'' Gladys Chapman was 12 years, 10 months, and 12 days old on April 29, 1931, when she died in Royal Inland Hospital in Kamloops. Occupation of the deceased was listed as ''Schoolgirl.'' On her death certificate, Dr. M.G. Archibald reported ''acute dilation of heart'' as the cause of death, with tuberculosis as the secondary cause. The duration of death was “several days.” 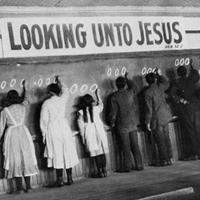 So, at the end, a little girl named Gladys endured days of fevered suffering -- coughing, bleeding, struggling for breath -- all alone, far from home, with no loved one to comfort her. She was one of the thousands of children whose deaths are acknowledged and lamented in the landmark report released last month by the Truth and Reconciliation Commission of Canada, a report that describes our country's treatment of indigenous people as ''cultural genocide.''

The TRC has established a National Residential School Student Death Register that contains the names of 3,200 children though the estimated number of deaths is believed to be more than 6,000. Speaking at the release of the TRC report, Commissioner Marie Wilson asked the audience to empathize with the anguish felt by thousands of parents whose loved ones never came home.

"Parents had their children ripped out of their arms, taken to a distant and unknown place never to be seen again, buried in an unmarked grave, long ago forgotten and overgrown. Think of that. Bear that. Imagine that," she said.

Gladys's family members believe she never would have died at such a tender age had she not been forced into the Indian residential school system. A member of the Nlaka'pamux Nation, she was part of a large extended family with deep roots in Spuzzum, a small community on the Fraser River north of Hope. Her relations have a deep awareness of the damage inflicted upon generations of children and families. Gladys's mother, Matilda, had also been taken to residential school as a girl and she knew all too well what took place there.

''Just imagine how horrible it would have been for parents and grandparents who themselves had lived through residential school abuse, watching their little ones being taken, knowing what they were going to go through,'' says Gail Stromquist, Gladys's niece.

Gail and her sister Janet, like the vast majority of Canadians both aboriginal and non-aboriginal, grew up with no knowledge of the Indian residential school system. ''We played skip rope and sang the song about how in 1492, Columbus sailed the ocean blue,'' Gail said. ''The myth of Columbus's discovery of the Americas was all we learned in school, nothing about residential schools or the culture of aboriginal people before contact.''

Even though many people in their family and community were living with the terrible legacy of residential schools, the history was so deeply hidden that the sisters only recently learned about the existence of the auntie they never knew. No photos remain of Gladys, and her name was never spoken by her surviving siblings, some of whom have struggled to deal with their own devastating experiences in residential school.

Today, both Stromquist sisters are public school teachers, passionately involved in the kind of reconciliatory educational work that Justice Murray Sinclair called for among the 94 recommendations in the historic TRC report. Janet works as a district teacher for the aboriginal educational program in Langley, and Gail coordinates aboriginal education initiatives for the B.C. Teachers' Federation. That work includes the Project of Heart, which is ongoing in almost all school districts province-wide and involves teaching and learning about the legacy of residential schools. The most powerful learning takes place when residential school survivors come into classrooms to share their personal experiences with students, who then make works of art in honour of the children who survived and those who never returned home.

The sisters' need to learn the truth of their own family experience -- and their desire to teach the truth about Canadians' shared history -- led them to do extensive research in local archives. It also led them to gently question their relatives about long-buried memories. Little by little, they pieced together Gladys's story.

Photo of Gladys's mother Matilda with her husband Charles Stromquist and two of their 10 children, Harold and Helmer, known as Swede.

She was one of five siblings from the same family taken to residential schools. Even though parents risked prison sentences for resisting the mandatory laws that required children be enrolled in residential schools, Glady's mother Matilda did manage to hide one of her sons from the Indian agent. The boy was in frail health, and she feared he would not survive the deprivation and abuse at school. Despite her best efforts, she couldn't save all her children.

Widowed at a young age, in 1929 Matilda married a Swedish immigrant named Charles Stromquist, with whom she had a long, happy marriage and 10 more children. ''We have often imagined what a comfort it must have been to Nanny after she married Grandpa Stromquist to know that no more of her children could be taken away from her to residential school,'' Gail said.

Gladys was taken to Kamloops Residential School, one of the largest in Canada. An imposing brick institution run by Roman Catholic priests and the Sisters of Saint Ann, it operated from 1890 to 1978 with as many as 440 children enrolled at its peak in the 1950s. For girls, mornings were spent in class, while afternoons were spent cleaning or working in the garden or kitchen. They did not get to eat the food they grew and prepared. The boys were taught some carpentry and other trades. All students had heavy religious instruction in English. The children were forbidden to speak their native languages or practise their own spirituality. Families were allowed to visit but they rarely did because of the long distances between school and home.

Conditions in the Kamloops school were atrocious but typical of residential schools across Canada. Neglect and abuse -- sexual, physical, emotional and spiritual -- were rampant. Many children tried to run away, only to be caught and punished for trying to get home. Some children attempted or committed suicide. But communicable disease was the worst threat. Underfunding, overcrowding, poor sanitary and ventilation systems, inadequate clothing, malnourishment, and a lack of medical care all contributed to epidemic levels of tuberculosis and other illnesses.

The federal government had known for decades that such conditions were killing children but failed to act. In 1907, Canada's first chief medical health officer, Dr. Peter Henderson Bryce, issued a report that exposed the appalling health standards in residential schools where, on average, TB killed 24 per cent of the children. In one school in the Prairies, the death rate was a staggering 75 per cent. The government suppressed the work of Dr. Bryce, and it wasn't until 1922 when he retired and could publish his full report, The Story of a National Crime: An Appeal for Justice to the Indians of Canada.

In 2014, the government of British Columbia released to the TRC more than 4,000 documents, including death records for aboriginal children aged four to 19. Many families were never informed of the deaths of their children, some of whom were buried in unmarked graves near the schools. 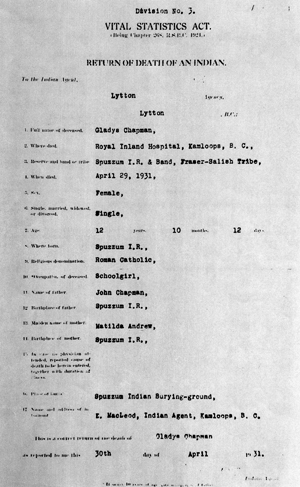 Vital Statistics document ''RETURN OF DEATH OF AN INDIAN'' records that Gladys Chapman was 12 years old on April 29, 1931, when she died in a Kamloops hospital.

No one knows how Matilda learned of the death of her daughter, but it is certain that the only reason she was able to bury Gladys in the community cemetery at Spuzzum was that her husband worked for the CPR and could therefore get her body transported home by rail for free. Gladys's gravestone in what the official records call the ''Spuzzum Indian Burying-ground'' reads:

Neither Jesus nor her loving family could save Gladys from the racist and assimilationist policies that destroyed her young life.

The Kamloops Residential School still stands to this day, a decaying reminder of the dark history we all must confront as Canadians. The last residential school in B.C. finally closed its doors in 1984, the last in Canada not until 1996. This is not ancient history. It lives on in memory of thousands of Canadians whose childhood was stolen and whose education was perverted by the government's determination to ''kill the Indian in the child.''

Janet and Gail Stromquist share Justice Sinclair's conviction that because education was the primary tool of oppression of aboriginal people and the misleading of all Canadians, education holds the key to reconciliation. They say the most frequent response to their teaching is: ''I never knew about any of this.''

''People have told me that they lived right beside one or another of the schools and never knew what went on there. They went through their entire schooling and never learned anything about this,'' Gail says. ''Some of our secondary students get quite angry about it, feeling their education has been censored.''

For the Stromquist sisters, it's clear that their life's work will continue to be educating the next generation about the truths of the past, shining a light on the hidden history, giving voice to those who were silenced, and helping create the conditions where true reconciliation can take place.

End note: Gladys's story and those of other residential school survivors will be published in an extensive learning resource currently being developed by the BCTF. Titled Project of Heart: Illuminating the once-hidden history of Indian residential schools in B.C., it will be available in print and online for use in B.C. schools this fall.