It doesn't get more salt-of-the-earth than when the prime minister stands in front of a Canadian flag surrounded by regular folks to announce students can now apply to a program. 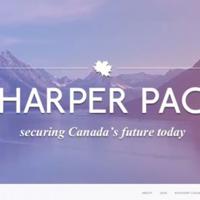 HarperPAC Is Dead. What Was that About?

Wait. Given what Tyee reporting has brought to light, let's amend that opening paragraph.

It doesn't get more salt-of-the-earth than when the prime minister stands in front of a Canadian flag surrounded by regular folks (vetted ahead of time) (for a photo) (during an election year, bill sent to taxpayers) to announce students can now apply to a program (announced the year before and many times after) (harnessing the fully co-operative PR team of the publicly funded institution he is visiting).

Harper was snapped standing in front of students and staff at the British Columbia Institute of Technology Jan. 8 when he announced the Canada Apprentice Loan program is now accepting applications.

The program itself was announced in February 2014, but Harper's BCIT visit was followed by numerous, similar events announcing you could now apply for the program by Conservative MPs across Canada.

A recent freedom of information request to BCIT for communications related to the prime minister's quick announcement and photo shows it takes more than a place and an iPhone for a political photo op on the taxpayer dime.

Among other tidbits, the documents show the students standing behind Harper were vetted by the PMO beforehand. And when bigwigs commandeered the parking lot, students just trying to go to class were forced to park and board a shuttle bus at the far edge of campus.

Here are some behind the scenes facts:

Prep for the event appears to have started sometime in mid-December with event planners for the prime minister making a trip out to the Lower Mainland to take tours of BCIT campuses. That was followed by security arrangements, invite lists, consultations with staff about the event and agendas for the event itself. A few days before the event the RCMP conducted a site tour, followed by a secondary walkthrough the next day. Media were told about the event in a release the day before it was held.

Access to the BCIT heavy-duty shop, where the event was held, was cut off two hours before the show started so the RCMP could begin security sweeps.

Students were told the day before they would have to bring their identification to be allowed access to the building and that the cafeteria and microwaves would be moved to another floor for the day. Internal documents from BCIT staff asked if students who didn't bring their student ID should be turned away and instead were told the PMO would provide them with a guest bracelet or sticker through their own registration system. PMO staff also asked if the fire alarm could be adjusted.

"If it's possible, can it be set to a two-tier alarm?" wrote Montana Brisbin to BCIT staff. "On the off chance of it getting pulled (whether purposefully or by accident), we would hate for it to disrupt any of tomorrow's activities."

Students were told 24 hours before the event that they would not be allowed to park on campus the next day because of a visit from federal officials. They were told to park more than a kilometre away and rely on shuttle service to and from the campus. Internal communications said this was because parking on campus was needed for the media and "VIPs." The notice posted around BCIT said the event would help "raise the profile" of the courses they were taking and encouraged students to come and watch.

Prior to the announcement more than 100 chairs were rented to be placed around heavy duty machinery where staging, drapes, mics and lighting would be provided by the PMO. Meanwhile the cafeteria was moved so that a green room could be set up for those making remarks to practice and prepare. Another room was reserved as a "media hold" for reporters to be corralled in until they were brought out to where the announcement took place.

Getting the message out

BCIT officials seemed quite amicable in helping the prime minister get his message out and asked Harper's staff if there was any messaging they wanted BCIT's president or other staff members to use with media. The staff at BCIT also asked if it was okay to use their own photographers for the event and if it would be okay to issue their own press release after it had taken place. PMO staff said they preferred their own photographer to cover the event to ensure all the eyes were looking at one camera. They had no problem with BCIT issuing their own release, but asked to see it first.

When The Tyee emailed Dave Pinton of BCIT's communications department about how it came to be that students were standing behind Stephen Harper for the photo, Pinton forwarded the query on to Alex Robinson, advance to the prime minister, without The Tyee's knowledge. Pinton told the PMO he was sending it as a "heads up" and shared with them the vague response he gave The Tyee.

For those who are wondering, here's that reply we got from Pinton:

How much did all this cost the taxpayer? We haven't been able to find out yet. So we are filing more FOIs.

Duff Conacher of Democracy Watch, a government accountability organization, said review of such media appearances and government advertising both need to be part of the mandate of the auditor general.

That would provide some oversight into situations where taxpayer funds are being used to fund partisan messaging.

He said some argue the ability to make such announcements is an advantage of the ruling party, but that it unfairly meddles in democracy.

When he tries to understand why taxpayers and non-partisan staff should have had to pour so much of their money, time and energy into Stephen Harper's visit to BCIT, Conacher scratches his head. "That is not value for money to re-announce something. It's not doing anything to increase the awareness of Canadians about it.

"It's simply, essentially, equivalent to an ad for the ruling party."