Even though one political action committee (PAC) has dirtied its last advertising space, there are still others in Canada scooping up globs of mud to fling at their political targets, and experts say the organizations can be dangerous for democracy. 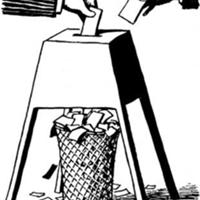 The HarperPAC, created to help Stephen Harper win re-election, had existed merely a week and said it was established to stick it to unions during the lead up to the October election by countering similar groups established to support left-wing causes.

PACs have long existed in the United States, serving as a way to pool money for a cause or candidate that is used to circumvent campaign contribution limits. Often they fund mud-slinging political advertisements. In Canada they are usually referred to as third party advertisers.

But late Thursday evening, the HarperPAC's website became password protected, followed by a message from spokesperson Stephen Taylor that the PAC had closed down. Then, seemingly, trying to put a positive thrust on the sword on which it fell.

''We have contributed to a new discussion about political financing in a fixed election era that is critical to our democracy,'' said Taylor. ''If our friends find our efforts to be unhelpful, we are more than happy to focus our efforts elsewhere.''

The shutdown came hours after a Toronto Star article Thursday featured angry Conservative Party official, and former Sun TV News VP, Kory Teneycke slamming the PAC as ''not something we're pleased about'' and even suggesting legal action against his supposed party allies.

That seemed to spell the end of HarperPAC.

In his farewell statement Taylor also took a shot at the media, claiming the issue of PACs was not addressed until his right-leaning PAC emerged on the scene, though a quick Google search shows articles about union-backed PAC Engage Canada appear as early as June 11.

During his attack on the media, Taylor didn't bother to acknowledge the existence of other Conservative groups like Working Canadians, which started a radio campaign attacking Liberal Party leader Justin Trudeau in May.

HarperPAC itself boasted organizing members that were staff for Harper's government in some of its most controversial departments such as Citizenship and Immigration and Foreign Affairs.

One of them is Jamie Ellerton, who had no biography under his photo on the web page of HarperPAC organizers.

Ellerton's Linkedin page reveals his experience as an assistant to the minister of CIC and work in the Ontario PC Party, it even shows his two years at a Windsor McDonald's (no mention of any employee of the month honours).

But what it doesn't say is Ellerton was executive director of the Ezra Levant-inspired group Ethical Oil, instead explaining he was ''Executive Director of a national NGO that advocates for Canada's petroleum industry.''

Such mystery and big money behind PACs can be harmful to democracy, according to Ellen Weintraub, one of six federal election commissioners on a Federal Election Commission in the U.S. appointed by Barack Obama.

Weintraub told The Tyee that PACs could have a place in democracy but as it stands now they are changing the way democracy works in the U.S., and the messaging during election campaigns is becoming sole property of those with cash.

That's causing a drop off in small donors to political campaigns who feel their meager contributions don't make a difference, she said. The trend has caused concern among some democracy watchers.

''What you want to have in a healthy democracy, is for everyone to have an equal voice,'' she said. ''I think we're seeing increasing concern about that out here, that government officials are becoming more and more responsive to these very large donors who play an over sized role in who can get elected.''

On top of that, she said, some PACs are spending as much as double the figure spent by the candidates they support and are also creating confusion among voters by having more powerful and overwhelming messaging than the candidates they are supporting.

But Engage Canada spokesperson Jessica Hume said groups like hers are needed to counter damage done to Canada's democracy by the Conservatives, accusing the party of skewing political financing rules to their advantage.

US employees pressured to give

There's also been a problem of coercion in the U.S., where companies will set up their own PACs and encourage employees to donate.

The emergence of third party advertising can be linked to the federal government's decision to bring in fixed election dates, says Kevin Thomas of the Shareholder Association for Research and Education.

SHARE focuses on responsible investment for company shareholders and released a study last year about Canadian companies putting money into PACs south of the border.

Thomas said another problem with PACs is their ability to have the funds hijacked by company leaders.

''We found companies spending money to promote policies that don't really reflect the interest of the companies themselves, they're just sort of pet projects of the CEO,'' he said. ''We worry about that happening here too.''