Reflecting on the minimum wage jobs she has held in years past, Dalya Gomaa stopped outside a McDonald's at a busy Vancouver intersection this morning to sign a petition to raise minimum wage to $15-an-hour. 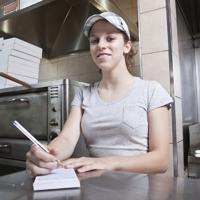 Minimum Wage Workers Not the Only Ones Getting Screwed

The Vancouver resident and mother of three teenagers is worried about how her kids will get ahead at the current rate. Her eldest daughter, on the verge of moving out of the family home to attend post-secondary, is particularly concerned.

"She's asking, 'How am I going to pay for university and my rent?'" Gomaa said. "It's really hard. With the minimum wage at the moment, they can't really afford anything… $15 an hour is a fantastic idea, because they'll be able to support themselves when they move out."

Similar leafleting events popped up in cities across Canada today, joining what has become an widespread annual campaign across the United States to push entry-level wages above the poverty line. The campaign has already inspired several U.S. cities to raise their rates to $15, most recently Seattle.

There's been no such raise north of the border, but labour unions in Ontario and British Columbia hope to change that.

In B.C., boosting the minimum wage to $15 would amount to a nearly 50 per cent increase. Earlier this year, the province raised the wage by $0.20 to $10.45, effective next year -- an increase declared "pathetic" by BC Federation of Labour President Irene Lanzinger.

"What does it take to get people above the poverty line?" Lanzinger asked. "We have evidence this can be done and is being done in big cities around North America, and we should do it here, too."

"We've had economic downturns in the last couple years; it hasn't been a great economy," said Gwen Suprovich, a University of Manitoba labour studies and economics graduate who authored a report on the minimum wage released Tuesday by the Canadian Labour Congress. "More people are looking at what our economy is built on, and how we help people move out of poverty and get good jobs."

More than one million workers, or 6.7 per cent of Canada's workforce, toil at the minimum wage levels set by various provinces, according to 2014 Statistics Canada data. But the cross-country rates aren't increasing fast enough to keep pace with rising costs for families, Suprovich's report found.

Critics of raising minimum wages include some economists who have argued that lifting the legislated rate leads to higher unemployment by distorting supply and demand for jobs, and small businesses who say they can't afford to pay more.

Suprovich said there's a grain of truth to the latter argument, but only if the minimum wage isn't raised in a gradual and predictable way.

"Having a large increase [at once] is very devastating -- that is worse for all businesses which need time to prepare, especially small ones," the Winnipeg-based researcher said in a phone interview. "But small businesses aren't really the ones who are employing most of the minimum wage workers. The majority are large companies with over 100 employees, some of these are very large corporations.

"They are not using the minimum wage because they're struggling to get by -- they're not mom-and-pop shops -- they're making millions on the backs of minimum wage workers."

According to Statistics Canada data, in 2010 large firms employing more than 500 staff accounted for more than two in every five of the country's minimum wage earners.

Handing out leaflets outside one McDonald's was Deanna Ogle, who said organizers picked the prominent fast-food chain because it recently announced wage hikes in the U.S., but they won't apply in Canada because most outlets are franchises.

"When you're working at minimum wage, you end up working multiple shifts in multiple places in order to make rent," said Ogle, who's worked in Vancouver coffee shops to pay the bills. "My experience was tough, but I can only imagine what the experience is for folks making minimum wage right now."

According to McDonald's Canada spokesman John Gibson, the company is being unfairly singled out by the pamphleteers. In an email, he said the fast-food giant's benefits include health and dental benefits, paid vacation and scholarships.

Gibson added that two-thirds of Canadian hourly employees -- including three-quarters of part-time staff -- in restaurants owned directly by the chain are paid more than provincial minimums.

"How much over?" asked the BC Fed's Lanzinger, in a phone interview. "Walmart is famous for that too, because they pay $0.10 over the minimum wage.

"Whether it's $10.25 or $10.35, for us it's the same fight. To say you only have a few of your workers at minimum wage is a trick of these big companies, because they pay slightly above the minimum wage so they can make that claim."

In a statement, McDonald's said it is merely paying what provincial governments require, and the issue of appropriate wages "goes well beyond McDonald’s." The firm said it trusts the provinces "to determine appropriate minimum wages across the country."

Lanzinger said that even without government action, it makes good business sense for companies to pay staff above the lowest wages. She hopes that large firms like McDonald's will heed the call -- particularly as its CEO made nearly $10 million in 2013.