Can provincial legislation protect the state and "block an individual from seeking a remedy for breach" of her fundamental rights and freedoms under the nation's Charter of Rights? 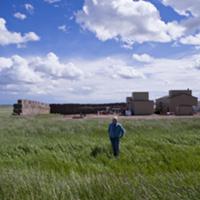 That's the question that lawyers representing Alberta oil patch consultant Jessica Ernst have now posed to the Supreme Court of Canada in a special legal filing known as application for leave.

Murray Klippenstein and Cory Wanless, Ernst's Toronto-based legal team, are hoping that the court will agree to hear their arguments that the Alberta Court of Appeal erred this year when it ruled against their client.

The Court of Appeal found that the province's energy regulator can violate a citizen's fundamental freedoms because a provincial immunity clause protects it from civil actions from citizens.

But Ernst's landmark lawsuit, which challenges the regulation of hydraulic fracturing, is multi-sided.

It alleges that Encana, a pioneer of hydraulic fracturing, drilled and fractured shallow coal bed methane wells directly in the local groundwater supply between 2001 and 2004 near Rosebud, Alberta, polluting Ernst's water well with enough toxic chemicals and methane to make it flammable.

The lawsuit also alleges that two provincial regulators, the Energy Resources Conservation Board (ERCB) and Alberta Environment, failed to act on documented and repeated violations of the law.

The ERCB, now the Alberta Energy Regulator, is the province's powerful energy regulator. It is to Albertans what the Texas Railroad Commission is to Texans: the primary regulator for the oil and gas industry.

In addition, Ernst's lawsuit alleges that the ERCB ceased all communication with the oil patch consultant and falsely accused her of making "criminal threats," thereby violating her fundamental Charter rights to free expression.

This week, Ernst won a legal victory when Chief Justice Neil Wittmann struck down the last of three attempts by the Alberta government to quash the case by ruling that Alberta Environment can be sued when it acts in bad faith.

An editorial in the Edmonton Journal hailed the decision, calling it a ''victory for the little guy.''

But last year, Justice Wittmann delivered a somewhat different ruling for the ERCB, which oversees oil and gas development and is governed by different statutes than Alberta Environment.

Wittmann found that provincial rules granted the ERCB immunity from lawsuits as well as Charter claims, and struck the regulator from Ernst's lawsuit -- though he acknowledged ''the Charter claim of Ernst against the ERCB is valid.''

Ernst appealed that decision, because she considers the ERCB to be ''the most guilty party'' in her seven-year-long fight for justice over the contamination of local groundwater.

(Nearly a decade ago, the shallow fracking of coal seams in central Alberta resulted in water well complaints from nearly 100 landowners.)

Earlier this year, the Court of Appeal of Alberta agreed with Wittmann and ruled that the immunity clause in the ERCB's legislation broadly protected the agency from lawsuits that allege violations of the civil rights of landowners.

Now, Ernst's lawyers have taken her Charter claim to the highest court.

A memorandum to the court argues that the ERCB breached Ernst's right to freedom of expression by ''punishing Ms. Ernst for publicly criticizing the ERCB and by arbitrarily preventing Ms. Ernst from speaking to key offices within the ERCB.''

The public record shows that the board cut off communication with the landowner in December 2005 and returned her mail at the same time she discovered methane in her water well.

Ernst refused to make any deal, and continues to be a vocal critic of the regulator now chaired by Gerard Protti, a former energy lobbyist and Encana executive.

The memorandum argues that ''the Charter guarantees not only fundamental freedoms, but also guarantees the right of Canadians to seek a remedy when these fundamental Charter rights and freedoms are violated.''

Other issues case will test

In addition to addressing the question of whether or not provincial legislation can override a violation of the Charter, the case will raise other issues of national concern.

For starters, should legislatures or courts determine when the state has overstepped its powers and abused the rights of citizens?

In other words, can the court ignore the violation of fundamental freedoms of citizens such as Ernst by the government just because its agency may have an immunity clause from civil action?

Secondly, the Court of Appeal of Alberta has now upheld law in the Ernst case that puts the province at odds with laws in Ontario, where constitutional issues come first.

In Ontario, a regulator could not violate the Charter rights of a citizen like Ernst and get away with it, Ernst's lawyers argue. They will ask whether the rights of Ontarians to seek Charter protections should be more robust than those of Albertans.

Lastly, immunity clauses are found in dozens of statutes across the country. ''The Supreme Court's guidance on whether legislation can limit the remedies available'' under the Charter will benefit all Canadians, argue Ernst's lawyers.

The Supreme Court only hears about one in 20 cases brought before it.

To date, Ernst has covered her legal costs herself, along with a few small donations from individual landowners, seniors, urbanites and community groups. She said she will not settle and wants all of the data on the fracking of coal seams made public.

Ernst expects to sell everything she has to get to the end of the lawsuit. ''Groundwater is more important than money,'' she said.

An analysis of the most recent legal ruling on the lawsuit by a University of Calgary law professor said that the Ernst case on groundwater contamination is shaping up to be ''the legal saga of the decade.''