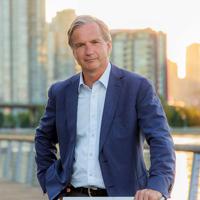 Mayor Gregor Robertson is seeking a hat-trick at 12th and Cambie. With the extension of terms to four years, the Vision Vancouver leader would have the opportunity to be the longest, continuously serving mayor in Vancouver history.

Political newcomer Kirk LaPointe of a resurgent NPA has something to say about that. So does Meena Wong, the mayoral candidate for COPE, the party from which Vision Vancouver was born.

LaPointe, with a 35-year media career, says he has a longer history as a business manager and political observer than Robertson did before he left the Happy Planet Juice Co. to run as an NDP MLA in 2005. Wong is a former assistant to ex-NDP MP Olivia Chow.

Insights West found housing (44 per cent) is the biggest issue, followed by transportation (16 per cent) and poverty (11 per cent). Robertson came to power in 2008 with a promise to end street homelessness in the city by 2015. Earlier this year, he conceded it wouldn't happen. That gave his opponents fuel. Wong set the tone out of the gate, with proposals to stop "renovictions," tax foreign speculators and penalize landlords of vacant houses.

Robertson's campaign has focused on Vision Vancouver's opposition to oil tankers and support for a Broadway subway between Commercial Drive and the University of B.C. LaPointe pointed out that Port Metro Vancouver is a federal body and a $3-billion subway would require provincial and federal funding; such a wish list would require better relations with senior governments.

LaPointe, editor of the Vancouver Sun from 2003 to 2010, made openness and accountability key planks in his campaign, with promises to open a lobbyist registry, hire an ombudsperson and routinely disclose city hall information that does not harm individual privacy. Vision Vancouver came to power with a promise for openness and accountability at city hall. It instead built a provincial government-style corporate communications department that has earned criticism from citizens groups in all corners of the city and reporters, who are no longer allowed to routinely interview bureaucrats and are often referred to the Freedom of Information office and its six-week waiting time to obtain routine statistics and facts.

LaPointe's NPA was the first party to announce it would release its donors' list and did so by its stated Nov. 7 deadline. Vision Vancouver was four days late in its release, after claiming it would one-up LaPointe. The numbers showed Vision Vancouver had outraised NPA $2.25 million to $2.1 million and sparked the campaign's dominant discourse about the influence of big money in politics.

Based on leaked audio from an Oct. 14 meeting of the city's outside workers' union, LaPointe accused Vision Vancouver of cutting a secret deal to not contract out union jobs in exchange for a $102,000 donation from CUPE. Almost two weeks elapsed before Robertson and Coun. Geoff Meggs sued NPA for defamation, but LaPointe brushed it off as an attempt to quash free speech during an election campaign. Wong accused Vision Vancouver of conflict of interest in receiving more than $1 million in donations from real estate developers who rely on city council approvals. She pledged to open an anti-corruption office at city hall.

Is there appetite for change in Vancouver? Insights West's satisfaction poll found Vancouverites rated their city hall 5.9 on a scale of 10, under the regional 6.3 average. One-quarter of respondents said their opinion of Robertson had worsened.

It also found 46 per cent of decided voters were going to vote Robertson, 41 per cent LaPointe and nine per cent Wong, but 27 per cent of people surveyed said they were undecided.