Right now, there are more than 1,000 children in British Columbia waiting to be adopted, and their chances at being adopted before they age out of the provincial foster care system aren't good, according to a new report from B.C.'s Representative for Children and Youth. 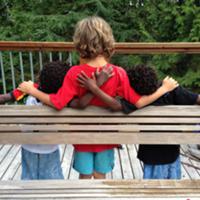 'Are These Your Children?'

The first external review of any Canadian adoption program, the "Finding Forever Families" report follows 450 children eligible for adoption and 457 families approved to adopt from 2005/06 to 2012/13.

In that time, only 260 of the children, or 58 per cent, were adopted, some waiting up to six years for their "forever families." Today, 56 of those 450 kids are still waiting to be adopted. Seven haven't even been officially enrolled in B.C.'s adoption program, due to a government error.

As for potential adoptive families, only 197 out of 457, or 43 per cent, successfully adopted children during that time. Another 250, or 55 per cent, dropped out of the program, though the report doesn't say why.

At a joint press conference held this morning, Representative for Children and Youth Mary Ellen Turpel-Lafond praised Children and Family Development Minister Cadieux for finding $2 million in April to clear the backlog of prospective adoptive families.

Independent of that, the province's provincial court has also been conducting a child welfare improvement process for the last year and a half to clear its backlog of child welfare cases, paving the way for making more of the over 8,000 kids in care eligible for adoption.

But it still isn't enough.

"[Over] 1,000 children is simply too many without a forever family, and we can do much better," said Turpel-Lafond, adding adoption and permanency planning must be a higher priority for the ministry.

"Last year, there were slightly over 200 children adopted while 1,300 children were waiting for adoption. And that number is less than it was a decade ago."

Ideas to speed up adoptions

Despite comprising 40 per cent of the children currently eligible for adoption, and over 50 per cent of the over 8,000 kids in B.C. government care right now, an average of just 86 aboriginal children were adopted per year in the last decade.

Part of that has to do with nervousness on behalf of both the ministry and First Nations of repeating past mistakes like the '60s scoop, where kids were forcibly removed from their families and adopted by non-indigenous families across North America.

That's why contacting and working with every one of the province's over 200 First Nations is one of the six recommendations Turpel-Lafond's report made and the ministry has adopted.

Other recommendations include legislative changes to ensure annual reviews of case files for children eligible for adoption; creating a higher public profile of the adoption program to attract potential adoptive families; recognizing custom cultural adoptions for First Nations, where children are taken in by extended family or community members, as adoptions; setting permanency planning measurements and goals for kids in the ministry's care, and tracking ministry's progress; and creating and implementing a ministry quality assurance program for adoptions.

Turpel-Lafond said a serious review of the adoption process on a case-by-case basis is the most important change, because "it is the only thing that we have found in looking at adoption efforts elsewhere that has led to a significant and sustained change for children."

Cadieux accepted the recommendations, some of which she said are already in progress, including setting a goal of at least 300 adoptions and 150 placed permanent guardianship arrangements -- which, unlike adoptions, can be challenged by birth parents -- by March 2015. That 10 per cent increase, Cadieux said, isn't enough but is a good start.

"It's taking way too long for families who wish to adopt to get through the process," she said, adding Premier Christy Clark's ministry mandate letter asked Cadieux to "present options to cabinet that will strengthen the provincial adoption program."

These are big moves for a ministry and government that hasn't reviewed its adoption services since 2002, and hadn't bothered to review its timeliness at all. Nor were adoption and permanency planning mentioned in the ministry's 2010/2011 and 2011/12 service plans; it reappeared in the 2012/2013 plan.

"It's work that's essential; it's work that does take time," Cadieux said of the changes Turpel-Lafond requests. "But we need to move faster."

No targets have been set for seeking new adoptive families, but both Turpel-Lafond and Cadieux encouraged more families to consider adopting kids and be open to adopting older children: 80 per cent of the kids eligible for adoption today are five or older.

Although adoption is a new topic for Turpel-Lafond, today's report continued with the representative's ongoing theme of overworked and under-resourced front-line ministry workers.

Some of the adoption workers the representative's office spoke to during the several years of research for the new report indicated they were often taken off the adoption file to work on family services and child protection. Others said managers had threatened to kill the adoption program altogether because the "crisis" regarding caseload and staff turnover was too great.

The $2 million recently injected into adoption program will be used for more home studies and adoption education for prospective adoptive families, not for hiring more frontline staff.

"We do have challenges with the number of frontline staff that we do have working on adoption and guardianship," Cadiuex acknowledged. "And we have challenges in all of the areas to meet our goals. That's not unique to government, and no matter if this was happening 10 years ago or 10 years in the future, that would probably be the case."

Currently there are 84 positions within the ministry dedicated to the 1,000 kids in the adoption program, including managers who would not have a caseload. The report notes many were part-time or worked full-time, but also did child protection intake work. The ministry currently doesn't keep historical records on how many positions were previously dedicated to adoption or the vacancy rate for these positions.

Nevertheless, Turpel-Lafond sounded confident in the ministry's commitment to meeting her recommendations, with deadlines starting in October 2014.

"I'm very honoured by the fact the minister has accepted the recommendations," she said, adding she has been meeting with Cadiuex and her directors of adoption and child welfare on this issue for a few months already.

The relationship between Turpel-Lafond and the ministry hasn't always been so collegial. Although it began to improve under Mary McNeil, who served as minister from 2011 to 2012, that was after the representative had successfully sued the ministry under Mary Polak and then-premier Gordon Campbell in 2010 for access to cabinet documents she needed to complete a report.

Better blood aside, the representative assured she will be closely watching the adoption program's progress from now on. "The minister knows we are on this issue in a very focused way," she said.