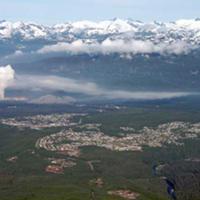 Over three thousand ballots were cast, marking a high turnout (71 per cent) in the community of roughly 4,300 eligible voters at the terminus of Enbridge's proposed oil pipeline. Fifty-six per cent of eligible voters cast ballots in the last municipal election.

The vote, although non-binding, is significant as part of the public relations battle being waged over Enbridge's project. Enbridge brought in teams of paid corporate canvassers from out of town, placed full-page ads in northern newspapers and launched a "Vote Yes for Kitimat" website.

"This vote is confirmation we are going to stand firm and say no to the influence of big oil," Lange said. "And coming from our community, a community that has everything to gain from this project, we still say no. We are sending that message throughout B.C. and to Ottawa."

Enbridge has 'more work to do': spokesperson

Donny van Dyk, Northern Gateway's manager of coastal aboriginal and community relations, said in a statement: "Today's result shows that while there is support for Northern Gateway in Kitimat, we have more work to do. And over the coming weeks and months we will continue to reach out and listen to our neighbours and friends so that Northern Gateway can build a lasting legacy for the people of our community."

The cities of Smithers, Prince Rupert and Terrace already officially oppose the project, as do the Kitimat-Stikine Regional District and dozens of First Nations. The province of British Columbia also said no to the project in its final argument to the joint review panel. However, that panel overrode the province and recommended the project be approved. The federal cabinet has until June 19 to announce whether it will grant the project certificate.

Before the plebiscite began, Douglas Channel Watch had $200 in the bank (Enbridge earnings for 2013 were $446 million). When the group committed to its first full-page newspaper ad, members decided they would pay for the remainder themselves if donations wouldn't cover it -- then the money started rolling in.

"People began handing money to us while we were putting up lawn signs, or downtown, and somebody even left an anonymous $2,000 money order in one of our mailboxes," said Murray Minchin, a member of the group.

Kitimat is located at the beginning of the Douglas Channel, where 225 tankers would be loaded with oil and set sail for Asia each year if Enbridge's project goes ahead. The city is arguably the B.C. community that would benefit most from the project -- with Enbridge promising up to 165 permanent jobs in the city.