You would be hard-pressed to find mention of Canada's residential school system in the curriculum for B.C.'s kindergarten to Grade 12 students. 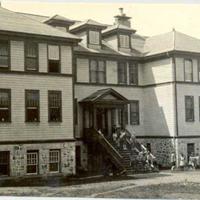 For Residential School Kids, a Legacy of Sex Abuse

Aside from elective classes like B.C. First Nations Studies 12, or optional resources social studies teachers can choose to use, there is little to no mention of the 100-plus years the Canadian government forced Aboriginal children to attend church-run schools.

Mandated by the federal government, the schools subjected children to physical, mental, and sexual abuse in an effort to assimilate them into broader Canadian society.

"Right now [the curriculum is] silent on it," said Glen Hansman, first vice president of the BC Teachers' Federation.

Post-secondary does a better job at addressing the legacy of residential schools. But students outside of First Nations Studies, or whose Canadian history courses take a colonialist point of view, still have little knowledge of the schools' history and impact on the indigenous population.

Due to recent efforts by the Truth and Reconciliation Commission, or TRC, local schools are beginning to focus on the system's legacy. In Vancouver this week, the Commission hearings will give residential school survivors in the region a chance to speak out about the physical, emotional, and sexual abuse they suffered because of government's attempt to "kill the Indian in the child."

Now, some educators across the Lower Mainland are turning the Commission's visit into a teachable moment. From joining Sunday's Walk for Reconciliation to cancelling classes for students to attend events, The Tyee has rounded up some of the ways schools are lifting the veil of silence surrounding residential schools.

Thousands of high school and intermediary students and teachers are descending on Vancouver's Pacific National Exhibition this Thursday for the Commission's Education Day. From 9 a.m. to early afternoon, they have sole access to art displays and activities engaging them in the legacy of residential schools.

The BC Teachers' Federation set aside $100,000 to bring students and teachers from across B.C. to Commission events this week. Hansman said he expects people from almost all of B.C.'s 60 school districts to attend.

Younger grades in the Lower Mainland will participate in events like Tuesday's All Nations Canoe Gathering in False Creek and the upcoming Walk for Reconciliation on Sept. 22.

But student engagement in reconciliation started long before the Commission hearings landed in Vancouver. Public hearings have already happened on Vancouver Island and in B.C.'s north since 2012, and since then the teachers' union has been urging districts across the province to take part in Project of Heart, a teacher's resource guide for engaging students on the residential school system.

Project of Heart encourages schools to invite residential school survivors into classrooms, and get students to decorate small wooden tiles, each representing one of the over 3,000 children who died in the schools. In August, the union's Langley chapter unveiled a canoe decorated with hundreds of the tiles from students across the province.

Last year, the union also gave teachers copies of "100 Years of Loss - The Residential School System in Canada", a curriculum guide for Grades 6 to 12 created by the Legacy of Hope Foundation, a national Aboriginal charity dedicated to educating people about residential schools.

Hansman said the union provided support for teachers using the resource "so it wasn't just something that sat there and collected dust, or was handed out decontextualized."

A different classroom for a day

Secondary students and teachers from Burnaby also participated in last week's Reconciliation Day at Simon Fraser University. One of several events held by the university this month, the day featured a keynote speech with Reconciliation Canada's Karen Joseph, a panel discussion with residential school survivors, and a screening of We Were Children, a documentary film focusing on the residential school experience of two survivors.

In a conversation with The Tyee last week, the university's First Nations Centre director William Lindsay said he expected a packed house for Reconciliation Day, with several education classes expected to attend.

"It's my hope that some of these [future] teachers will incorporate the residential school system into their curriculum development later on when they're practicing teachers," he said.

The university's senate also passed a resolution absolving students of any academic penalty for skipping classes to attend Commission events at the PNE from Wednesday to Friday. Lindsay acknowledged some students might use it as an excuse to skip class.

"Those who aren't interested aren't going to go. But if students want to take a day off and try to fool somebody, that's up to them," he said.

Kwantlen Polytechnic University, named after the Kwantlen First Nation on whose land their Langley campus sits, is also encouraging professors to direct students to events held on three of their four campuses this Friday.

From book launches, to panel discussions, documentary screenings, and a powwow to wrap up the day, the university is offering free shuttle services between the Lower Mainland campuses to encourage students and the public to take in as much as possible.

"Some profs are even making this a component where students have to attend an event or present a paper on something they've attended," said Lisa Monchalin, Kwantlen's indigenous studies program developer.

The University of British Columbia (UBC) is taking it one step further, suspending almost all classes on Sept. 18 and encouraging students to head to the PNE instead. Linc Kesler, director of UBC's House of Learning, says it's the first time the university has cancelled classes in the decade-plus he's been there.

"It's a very significant commitment... the thinking was that if students are able to connect with the first day of the [Commission], they might be able to go back and attend other events," he said, adding suspending classes communicates the event's importance to faculty and students.

The university is also showing a live feed of the hearings at several locations on campus.

Truth and reconciliation will take longer than one week, however. Continuing the message of the Commission's hearings for years to come is a goal educators want to realize.

New curriculum that includes residential schools is currently being piloted in some B.C. schools. But it won't go mainstream until next year.

"Both the [teachers' union] and the ministry wanted to make sure we had Aboriginal representation on all of the working groups revising the curriculum, because the commitment from the province is that Aboriginal content and knowledge will be embedded into the curriculum," Hansman said.

The University of British Columbia's biggest legacy from the Commission hearings will take even longer to develop. In collaboration with the University of Manitoba, future home of the official Commission archives, the university has proposed its own centre focusing on residential schools.

Part museum, part library, the centre would be open to anyone wanting to learn the history of residential schools, students requiring access to the schools' records for academic research, and used for events targeted at the schools' legacy and how to move forward. Plans also include a monument to honour the system's victims and survivors.

All that's left now is to find the money. Kesler wouldn't say how much the centre would cost, just that it's a minor project by university standards. Currently seeking funders, he said he hopes to have the final budget by the end of this academic year.

As a way to continue the legacy of truth and reconciliation, Kwantlen will commission artwork from local First Nations whose land their four campuses sit on. But sociology professor Seema Ahluwalia says changes to how the university supports Aboriginal students today would also make a fine tribute.

"One of the things I suggested is that we look at ways that we can be more supportive of Aboriginal students by making sure that there's childcare and more programs to support them financially," she said.

Kwantlen is already in the process of developing new indigenous programming at its Surrey campus, and Ahluwalia is confident the university's new president, Allan Davis, is moving Kwantlen in a good direction.

"It's not something that I feel Kwantlen has been very good at responding to in the past, and I'm really hopeful that there will be more momentum behind supporting Aboriginal students and communities," she said.