The gruesome saga of convicted serial killer Robert Pickton's trial and a scathing public inquiry may be over, but families of four of the Coquitlam pig farmer's victims today launched the first lawsuit to emerge from the tragedies. 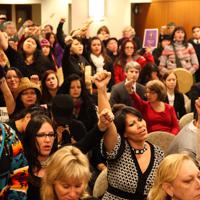 Seven of the women's children filed civil suit documents in the BC Supreme Court this morning, containing shocking allegations of negligence or gross negligence by authorities -- including the RCMP, Vancouver Police Department, City of Vancouver, Minister of Justice Shirley Bond, and Crown Prosecutors -- and directly accusing Pickton's siblings Dave and Linda of full knowledge and "abetting" his crimes.

None of the allegations have been proven in court, and neither have those named yet responded to the lawsuits, which were filed by lawyers on behalf of the children of murdered women Dianne Rock, Sarah de Vries, Cynthia Feliks and Yvonne Boen.

Pickton was convicted of six counts of second degree murder, after 27 other murder charges were dropped. However, he confessed to an undercover officer of killing 49 women.

Though the serial killer's siblings never testified in his trial or the inquiry -- despite lawyers' requests to Commissioner Wally Oppal that Dave testify -- this is the first legal case to accuse the Pickton family of responsibility in Robert's crimes.

'Something we want behind us': Dave Pickton

When reached by phone, Dave Pickton told The Tyee he knew nothing about the lawsuit. None of the allegations against him have been proven in court.

"This is first time I've heard of it," Dave Pickton told The Tyee. "If they've got a problem, it's with the government and my brother -- not us.

"They can do whatever the hell they want.... This is something we want behind us -- for everybody to move forward."

The case is being brought forward by lawyers Jason Gratl, Robin Whitehead and Neil Chantler, on behalf of seven family members. Among other unproven accusations contained in the documents:

That Crown Counsel "knew or ought to have known that Robert Pickton presented a substantial danger to the life and security of sex workers."

That VPD and RCMP investigations of Robert Pickton "were negligent and, in particular, the investigations were deficient" for failing to follow up on informants' tips or properly interrogate allegations against Pickton.

Though Oppal's December 2012 report accused the various police forces involved in the Pickton investigation of "colossal failure," as well as racial bias, he did not name any individual police officers.

Today's lawsuit, however, levels accusations against five officers by name: Richard Hall, Earl Moulton, Brad Zalys, Ruth Chapman (all four members of Coquitlam RCMP detachment), and Frank Henley (a member of the RCMP "E" Division). The RCMP did not respond to interview requests regarding the lawsuit, or about the named police officers.

"There are clear findings of misconduct, poor conduct by police officers, and arguably negligence in Oppal's report -- so there's no doubt these claims are founded in large part on what Oppal found after nine months of hearings," lawyer Neil Chantler told The Tyee. "Of course, they hope it will bring closure. It's the final step in what's been a long process."

Chantler explained that the Pickton siblings were named because, under the province's Occupiers Liability Act a property-owner can be held responsible for harm caused on their property.

"(The Act) essentially creates a standard of care that landowners are required to meet," Chantler said. "It provides that people who are harmed on a piece of land may sue the landowner. All three siblings owned the land on which these women are presumed to have been murdered."

But the lawyer said that families "reluctantly" filed suit because they feared Oppal's recommendation of compensation for victims' children is not being implemented, despite Attorney General Shirley Bond's promise that B.C. would immediately begin action on the commissioner's ideas.

"We are not going to wait," Bond told reporters on Dec. 17. "Today we are taking immediate action.... It's a beginning and there's much more to be done.

"I want to assure the families and friends of victims, as well as all British Columbians, that our government will use the recommendations in this report to make changes and protect vulnerable women in our province. These will not happen overnight; we have a long journey ahead of us.... It has taken years to get to this place, but I am hopeful that we can move forward together."

When he released his final report on Dec. 17, 2012, Oppal called the missing women investigation a "colossal failure" but insisted that naming individual police officers or authorities by name would not be useful.

"I have come to the conclusion that there was systemic bias by the police," Oppal said. "It was important for me to understand the underlying causes of police failures.

"The women were poor -- they were addicted, vulnerable, Aboriginal. They did not receive equal treatment by police. As a group, they were dismissed.... These women were vulnerable; they were treated as throwaways."

The City of Vancouver -- named in the document -- declined to comment on the matter as it is before the courts, a spokesperson told The Tyee.

The Coquitlam RCMP and Ministry of Attorney General also declined to comment on the lawsuit, instead forwarding The Tyee to other departments' spokespeople. Minister of Justice Shirley Bond and the BC RCMP "E" Division did not return interview requests in time for publication.

Chantler said today's lawsuit is only the first in a series, but that families hoped to give the government time to implement recommendations before using a legal avenue.

"There are more," he told The Tyee. "We're working with some other families on bringing claims as well, and there will be more filed.

"They'd hoped this would be unnecessary, but this is what needs to be done in order to bring them that closure."