It took Titanium Corporation seven years of work before it could confidently announce to the oil sands industry: "We have a solution." 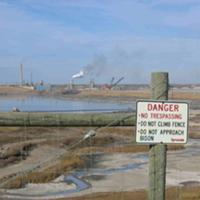 First, the Canadian cleantech firm put together a team of scientists. "Folks who had a vision," as CEO and president Scott Nelson recently put it.

Then Titanium built and tested a new type of "mineral concentrator." It would recover valuable heavy minerals (zircon as well as titanium), along with bitumen, from Northern Alberta's 176 square kilometers of toxic tailings ponds.

Titanium next got Suncor, Syncrude and CNRL (three of the biggest oil sands producers) to participate in a $15 million pilot-scale demonstration plant in Devon, Alberta.

After 12 months, the cleantech firm claimed, the results "were outstanding." Titanium's technology could recover three-quarters of the bitumen and solvents submerged in tailings it processed.

Implementing the technology at a large oil sands operation would cost about $400 million. But recovered minerals and bitumen would easily recoup that investment within a short period, the company calculated. It might also make tailings ponds smaller, less toxic and a lot easier to clean up.

"We have a unique opportunity," Nelson told Canada's Standing Committee on Natural Resources last November. Alberta's oil sands, he said, could finally move from "a widely criticized and defensive position, to [being] a leader in innovation and recovery of value from waste."

There was just one problem: industry inertia.

"The industry is very much aware of [our technology]," Nelson testified to the committee. "They have participated in its demonstration. They have all the results. They haven't said no. They're just moving very slowly."

"Where is your wall at this point?" asked Liberal MP John Mackay.

"The wall is the oil sands industry -- the operators," Nelson replied. He added: "It's maddening, to be honest, but we're not giving up."

Nelson, who declined to be interviewed by the Tyee Solutions Society, tells an all-too familiar story. More than 60 of Canada's 720 cleantech firms have developed solutions that could make bitumen production cleaner.

Yet despite an ongoing shift in industry attitude towards these innovators, Tyee Solutions hasn't learned of any whose technology is operating on a large commercial scale.

The journey from an inventor's first flash of inspiration to a technology that saves the planet is long and unpredictable. Ben Sparrow's "eureka" moment came at night eight years ago, on a train ride between Beijing and Shanghai.

"I began drawing a picture of this machine I'd been dreaming about," the 35-year-old CEO and co-founder of Vancouver's Saltworks Technologies recently said.

What Sparrow conceived that night was a cheaper and greener method of removing salt from seawater. The applications for it could be world changing.

"A fifth of the world's population suffers from a shortage of drinking water," read a 2009 Economist profile of Saltworks, "and that fraction is expected to grow."

But the company soon realized its technology was well suited for another type of customer: Alberta's largest bitumen producers.

"We envision ourselves delivering solutions to a wide range of industries," president and co-founder Joshua Zoshi told Tyee Solutions. "It so happens that oil and gas is our first market."

Success for them could set in motion "a virtuous circle", she said. Cleantech firms grow bigger. They export more technology. Capital flows back to Canada. The economy becomes stronger. And ultimately our planet gets healthier.

But something is stalling that transition.

ABOUT TITANIUM, SALTWORKS AND N-SOLV

Last November, departing oil executive Jean-Michel Gires offered an explanation. Days later he would be air-bound to Paris after three years at the helm of French-owned Total SA's Canadian operations in Calgary.

His explanation for industry inertia on cleantech? The oil sands business is too full of "mavericks", Gires told The Globe and Mail in an interview.

Technology innovators from outside the oil sands "could be playing a role if they were given a chance," Gires said.

But instead, the industry's attitude is that "we are the best in the world and we can develop technology by ourselves."

Gires' remarks proved controversial -- many sources approached them cautiously (and Tyee Solutions was unable to reach the French executive). But his sentiments weren't altogether new.

"A growing list of innovators," it read, "are becoming increasingly frustrated at what they perceive as the closed door attitude of existing producers."

Then in March 2010, a report published by the provincially funded Alberta Energy Research Institute offered an even blunter perspective.

"The oil sand business is quite insular," wrote David Devenny, one of Canada's most respected engineers and geologists, and a key player in the early development of the industry. (Devenny declined Tyee Solutions' request for an interview).

"The business," in his opinion, "would benefit from exposure."

But too much exposure can sometimes overwhelm.

At the height of BP's Deepwater Horizon disaster, in May 2010, that company received more than 20,000 emails and 72,000 phone calls about how to stop the oil spill. Even Hollywood actor Kevin Costner proposed a solution.

"You name it, it's been suggested," a Coast Guard senior chief said at the time. "There's so many ideas you become numb to them."

Does a similar solutions-fatigue afflict the oil sands operators? Perhaps.

No less towering a critic of the oil sands than University of Alberta water biologist David Schindler told Tyee Solutions: "I probably have somebody phone me with a new [water-saving] technique about once a month."

"You have to kiss a lot of frogs in this business to find the odd prince," said Neil Camarta, a retired executive who's held senior positions at Shell Canada, Syncrude, PetroCanada and Suncor. "People can get disgruntled and turn on you and accuse you of being close minded."

Producers make small, "incremental" improvements all the time, he said. Many of the solutions pitched by outsiders though are "disruptive." They promise huge rewards, he said, but may also require infrastructure costing hundreds of millions of dollars.

And even the most outstanding lab results are no guarantee that a technology will perform reliably at full scale in Alberta's harsh northern climate.

"You have to be careful that if you try a new technology it doesn't shut down the whole plant," Camarta said. "You could take a big leap and end up in the fire."

Still, big leaps can and do happen. "In situ" extraction, where bitumen is melted out of the ground with high-pressure steam, was considered fringe technology 20 years ago. Now it's mainstream.

Clean technology innovators like John Nenniger even consider it passé. With Suncor support, his company, N-Solv, is building a $60 million pilot project in Northern Alberta. It will use solvents -- like butane or propane -- instead of steam to help extract the bitumen.

Nenniger believes his process will reduce greenhouse gas emissions by 85 per cent, eliminate the need for water and double profits per barrel. "Our best estimate is we will see test results that are meaningful by December," he said.

Yet, the cleantech innovator told Tyee Solutions: "It's taken me 15 years to get to [this] point."

Sometime before Nenniger's results come in, an industry alliance known as COSIA plans to release new guidelines making it easier for Canada's cleantech firms to connect with producers.

That, in effect, was exactly what an industry-government study on tailings pond treatment recommended last August.

There are "credible and experienced vendors who have so far not become involved" in the solutions process, the report said. Producers would do well by "lowering the threshold" for cleantech firms and others to participate, it added.

"Definitely there are still folks not open to outside thinking," said Camarta, the former oil sands executive. "But if you look at the gauge, it's moved from the red zone to light green in terms of improvement."

Still, changes in attitude only open the door. The real question is whether they will invite Canada's cleantech innovators to play a role, reward them with serious revenues -- and ultimately provide a cleaner environment for us all.