The words "affordable home ownership" and "Vancouver" aren't frequently uttered in the same breath, but some innovative local projects suggest the tides are turning -- slowly. The discussions emerging from the Feb. 14 BuildEX Vancouver panel on living affordably in Greater Vancouver reflected what it is to live in this region; it's a place of infinite, Russian doll-style contradictions underscored by a widely felt, sometimes cloudily articulated notion that somehow things can be better. 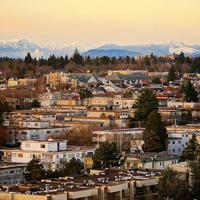 The panelists disagreed with one another at times, but Brent Toderian, Sean McEwen, Dane Jansen, and Heather Tremain put forward a host of ideas on how to improve housing affordability, based on their extensive and varied experiences with building, planning, and designing housing in all forms.

The many specific idea cited by the four experts fall under three headings of "opportunities" the building, design and policy making community should seize, according to the panelists.

The Verdant town homes on Simon Fraser University's Burnaby campus are proof that a special alchemy of community-minded partnerships and creativity can create affordability when there may otherwise be none to be found.

Heather Tremain, principal of Urban Fabric Group, was involved with Verdant, a 60-unit wood frame development completed in 2007. She says it's a model for affordable home ownership that can and should be applied elsewhere. The units were designed primarily for families, a demographic often priced out of Vancouver's real estate market.

Verdant's smallest unit, at 518 square feet, sold for $129,000. Its largest, three-bedroom units, at 1,247 square feet, sold for $311,000. SFU Community Trust provided the lower-cost land, and Vancity Enterprises Ltd. handled the development instead of a standard high-profit developer. As well, the project eschewed traditional marketing strategies like expensive newspaper advertising campaigns, which can cost tens of thousands of dollars. Instead, marketers focused on more modest door-to-door campaigns, and achieved the same goals at a much lower cost.

"The objective of the work was to create family-focused, multi-unit residential building that would provide an affordable option in the university community," Tremain said.

SFU purchased some units to hold as rental stock, but most were sold to families. It was both an environmentally- and economically-sustainable project. While the objective was to create community and affordability, it was never treated like a charity.

"Everybody got paid," Tremain said. "We didn't squeeze the architects or whomever. It was a market project."

Tremain also points to Toronto's Options for Homes as a model for affordable ownership that could take shape in Greater Vancouver. The non-profit facilitates development and has since helped build more than 3,000 units of affordable real estate in the Greater Toronto area. How it works: Options creates a co-op, the co-op buys land, and then Options works for the co-op, alongside related professionals such as architects and planners. Homeownership Alternatives, a separate entity, finances the co-op. Homeownership Alternatives operates on the proceeds from previous Options projects.

"The market might deliver it at $290,000 a unit. They can deliver it at $190,000," Tremain said of Options for Homes projects. "One of the interesting things about them is they buy land in areas that are kind of the 'next' area. They wouldn't buy on Main Street right now in Vancouver. They'd buy on Fraser Street, they'd buy on Victoria Drive. So they get a benefit for being the new group into the market."

A no-frills approach to building and marketing the units also keeps costs down, she added.

Sean McEwen, a longtime community housing activist and Vancouver architect with an independent practice, called for architects and developers to re-prioritize the non-market housing sector.

"It's something we used to do much better 30 or 25 years ago. But we've forgotten how to do that, and it hasn't been a priority in society," he said.

"It's created a system where we told certain groups that you will have some difficulties, but maybe you'll have to move somewhere else," McEwen continued. "Rather than consider ourselves as closed systems, closed neighbourhoods where we want to protect what we have, we have to think of integrating the needs of others in society, especially the less fortunate."

McEwen was critical of the Vancouver Mayor's Task Force on Housing Affordability, which did not articulate many opportunities for non-market housing. To grow non-market housing in the current political and economic climate, he suggested using the conditional use zoning bylaw to leverage affordable housing opportunities; taking housing units as exaction for rezoning benefits rather than 'pay in lieu' scenarios; and finally, ensuring the voices of local groups are heard at city hall.

"We have too much of a top-down process in terms of planning our communities," he said.

Reducing the cost of living in areas like transportation and food is key to tackling the affordable housing conundrum.

"We have a double whammy here in Metro Vancouver," panelist Brent Toderian said. "We have the highest housing costs and below average national incomes."

"There's nothing incompatible with rental housing and office space," he says. He noted, however, that Vancouver's supply of live-work spaces leaves much to be desired.

Car sharing has seen great success in the city of Vancouver, but it's enjoyed less traction in outlying areas. Dane Jansen, principal of dys architects, suggests Vancouver suburbs adopt peer-to-peer car sharing initiatives in which car owners rent their cars to neighbours. He points to Getaround, a peer-to-peer car rental program in San Francisco, California, in which users rent each others' cars for an average of $8 an hour.

For architects, Jansen says, "Building [housing complexes] with co-op cars in mind reduces the cost of the built form and reduces costs for residents."

A single stall of parking is about $35,000, and one car-sharing spot can save four to five stalls in a new development.

Jansen also supports alternative ownership and tenancy models, such as co-housing, joint-purchasing, and joint tenancy. To co-own living spaces like living rooms and kitchens can reduce the cost of buying a home. Tremain said such arrangements may gain ground among younger adults in their 20s and 30s.

"Maybe these new housing forms could start to solve a couple of our issues," Tremain said, referring to a 2011 Vancouver Foundation survey that found the top concern among interviewees was a growing sense of isolation.

Shared tenancy, shared ownership, co-housing, and car sharing could present solutions to some foundational ingredients for living well: living in community, and living within one's means.