Amanda Todd was a 15-year-old girl in British Columbia who, like so many of her peers, spent part of her childhood online. 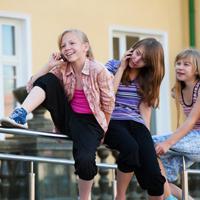 She used a webcam to chat with new people. She was plugged into social media. And after her death by suicide last week, a video she made and posted on YouTube a month before was shared across the world. It told a heartbreaking story of the bullying and torment suffered after a day in Grade 7 when she sent a chest-baring photo to someone on the Internet, which was later revealed to her real life social network.

The fall-out elicited unbelievably cruel words and actions from peers. When changing schools didn't bring relief, Todd drank bleach in an attempt to end her life. When she failed, kids egged her on to do it again.

While a full picture of her death remains unclear with a police investigation ongoing, Todd's story has captured worldwide attention. And in the conversation now about young people, social media and bullying, the element of how commercial culture seeks to hypersexualize young people demands much more discussion, say advocates.

"Hypersexualization is very important. That's a huge problem and a huge component to this," says Chantelle Krish of YWCA Metro Vancouver, a non-profit that targets hypersexualization among youth, among other issues.

Seventeen-year-old Dawn, who was interviewed about her "sexting" (or sexual texting) experience in the documentary Sext Up KIDS, now reflects on Amanda Todd. In Grade 7 Dawn shared an intimate photo with a boy she knew and really liked, figuring it would remain private. When she reached high school she learned he had forwarded it to friends, and that it had circulated around not one, but two schools.

"I just wanted to feel loved. When you want someone to like you, you go to pretty much any extent to get that, especially when you're young and don't know any better," she tells The Tyee in a phone interview.

Dawn was picked on for the photo, not tormented. But the level of unkindness Todd faced doesn't surprise her.

"It doesn't surprise me at all, but I think it's horrible. It makes me sick to my stomach," she says. Teachers in Dawn's school are aware of what goes on between kids, "but a lot of them feel uncomfortable stepping in because it's such a huge, serious topic that they don't even know how to handle it. With my mom, she just couldn't believe it."

There's something happening in the private lives of young men and women that no anti-bullying program seems to be able to crack. Todd's story renewed pleas for a new approach, with B.C. Premier Christy Clark announcing plans for an anti-bullying summit on Nov. 13 in Vancouver that would bring together "parents, educators and experts" to discuss the issue. Clark tweeted there are "more details to come."

With that in mind, Dawn offered a few insights about what we're up against.

Desire to be loved

"My heart just dropped. I was like, how many people have seen me like this?" Dawn told an interviewer who asked how she felt about her private photo being shared in Sext Up KIDS.

"Now when you look at Miley Cyrus, what you see is someone who fits in seamlessly with the hyper-sexed society. And remember, to be visible you have two choices in a hypersexualized society. You're either fuckable or invisible," Dines tells them.

Square that frightening new reality with some timeless teenage feelings, like wanting to hear you're pretty at 13. Much activity online, including sexting, is about finding validation.

"In seventh grade I would go with friends on webcam / meet and talk to new people / Then got called stunning, beautiful, perfect, etc.... /" wrote Todd on cards she held up that told her story on YouTube.

"People love to hear that they're pretty," Dawn points out. "The person who took the picture of themselves... even just profile pictures they think are pretty, they want to hear good feedback. But there's always going to be those bullies who are like, 'No. No, you're ugly.'"

Though they can be sites of torment, Dawn stresses that Facebook and Twitter are also for many young people the primary site of belonging -- what she calls "the number one" human need.

"We need that before anything else -- to feel loved. Sometimes it's hard to face people in person, especially when we haven't been brought up to get a group of people together and go to movies anymore."

Asked why she thought some of Todd's peers would offer criticism rather than support when the photo surfaced, Dawn put it this way:

"There's a lot of pressure from parents, being like 'Oh you can't do this, you can't do that.' I wouldn't go home and say, 'Oh mom, guess what I just did?' You want to keep it private, and there's pressure to keep things like that private, even between two people. So when something like that gets thrown out there, and everyone knows about it, everyone criticizes it even though they might be doing it themselves."

Privacy to some young people primarily means "private from my parents" or "private from my friends." They may have a different understanding of what it means to be private online. That can be hard for parents to get, because technology allows kids to build a firewall between their online lives and their parents, says Maureen Palmer, the director of Sext Up KIDS.

"Because they adopt the technology so quickly, when parents get online as they did on Facebook, kids just move to Twitter. They will find new ways to keep their behavior private. The slut shaming, the bullying, the risky behavior for the most part, takes place where parents can't see it."

Krish from YWCA Metro Vancouver said kids' understanding of how they present themselves online is critical in the quest to end bullying. Her organization promotes media literacy and plans to hold a youth conference in November on the subject, with workshops on hypersexuality, aggression and online visibility. The aim is to get kids thinking critically about who they are, rather than who they want the world to think they are.

"With social media, there's a lot more around the portrayal of yourself rather than your actual self," she says.

It's up to young people to protect sexual privacy too, and for that Dawn's advice is simple: "If someone does get a photo like that, don't forward it to anyone. Just delete it. Then you know it stops with you."

Focus on the bullies

For any sort of future anti-bullying initiative, Dawn would like to see a greater focus on what drives bullies.

"I don't think people are born mean," she says. "I think it should be more focused on how to help bullies become at ease with themselves."

After interviewing kids and experts for her film, Palmer feels that a big part of addressing bullying today is about addressing shame.

Krish agrees that conversations about sexuality will be key in helping both victims and bullies in the future, and adds that she'd like to see young people invited into the discussion.

And when those discussions happen, Dawn says, don't forget to keep trying to drive home this important message: "Once you're OK with yourself, then no one's opinion, except for the one that you really love, matters," she says. "Accept who you are, instead of getting someone to tell you who you are."