When Nori Nishio was finishing up his first year at the University of British Columbia in the spring of 1942, he was given 24 hours notice to pack up his things and leave Vancouver. 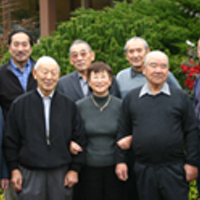 Nishio was among the thousands of Japanese-Canadians in B.C. forced out of their homes and into internment camps during the Second World War.

Because Nishio moved to Canada from Tokyo as a one year-old, he was considered a Japanese national and had little time to prepare before his departure.

Nishio considers himself "one of the luckier ones." He was able to finish his degree at the University of Alberta and work during the summers rather than stay in an internment camp. He now lives in Nanaimo as a retired dentist.

But yesterday, along with his brother Tom Nishio and 53 others representing Japanese-Canadian students that were expelled from the university, Nishio finally received a degree from UBC.

Of 76 students forced to leave so many years ago, 10 of them attended yesterday's ceremony conferring honorary degrees.

It took Mary Kitagawa four years to track down those students so that the ceremony could happen. Kitagawa was seven years old when she was sent to an internment camp. As an adult, she discovered that American universities all along the West Coast had awarded honorary degrees, so she decided to write to the president of UBC and ask for the same acknowledgment.

"I thought they might want to right a wrong," said Kitagawa. "I brought it to the Senate Tributes Committee and that's where I hit a road block -- they didn't understand our history."

After years of struggle, Kitagawa said she finally convinced the university to award the degrees.

For some of the former students, the degrees are a more significant acknowledgment than the federal redress awarded in 1988, or even the B.C. legislature's recent apology. The degree indicates the disruption of the entire course of their lives, not just the material wealth lost or the suffering during time at the internment camps.

Louise Noguchi came to Vancouver from Toronto on behalf of her father Kiichi Noguchi who died two months ago. He had graduated in the spring of 1942, but had not been able to attend his own ceremony, something Noguchi said yesterday she thought her father "always regretted."

Her father had planned to become a doctor before he was sent to an internment camp, she said.

"He wasn't upset about the camp, he was upset about not being able to do what he had wanted most."

"I've heard more about his experience in the last month than I had growing up," he said. "I think there was just too much hurt."

Nishio said he found himself surprised to be walking across the UBC stage, 70 years after leaving.

"I didn't think that I would ever see this day. Most of the students that were here at that time have died, and they would have died never knowing that a day like today could happen," he said.