A woman sits in a doorway, feet apart and leaning forward with her elbows on her knees, posed like an athlete taking a break on the bench. She's had an injury. 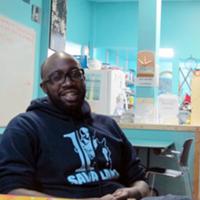 "I had a date who bumped me on the head really hard," she tells us, rubbing her scalp with one hand. "I feel like I'm brain-dead."

A tuna sandwich is what we have to offer. It seems an inadequate response to her predicament; regardless she gratefully accepts it, along with a juice box and a piece of homemade banana bread.

For someone living in poverty in Vancouver's Downtown Eastside, getting enough to eat can be a full-time job. There are numerous agencies providing free meals, but many only do so once a day or once a week. For survival sex workers who keep atypical hours, it can be even more difficult.

For the past seven years, Jennifer Allan has been trying to fill this gap with Jen's Kitchen, an advocacy, outreach and food relief service for women in Vancouver's survival sex trade.

Each Tuesday night, she and a team of volunteers -- usually three to six people -- roam the streets and alleys of the Downtown Eastside handing out sandwiches, snacks and juice boxes to any working woman who wants one.

'There's a lot of love in food'

On the night I accompany Allan, we are joined by Elisa, Courtney and Brent, members of a regular bible study group at Tenth Avenue Alliance Church who volunteer with Jen's Kitchen once a month.

We meet up at the Downtown Eastside Neighbourhood House to prepare the sandwiches, which are typically tuna. Allan avoids peanut butter. "It's poverty food," she tells me, something the people down here get enough of already. Tuna is a bit more gourmet, she says, and certainly higher in protein.

While we chop up lettuce, smoked tofu, carrots and tomatoes to toss in with the canned fish, Courtney tells me that she stumbled across Jen's Kitchen on a blog. She and her fellow volunteers hadn't been looking to do outreach work specifically around food, she tells me.

"We were thinking love," says Courtney. "But there's a lot of love in food."

Jen's Kitchen started with a dozen tuna sandwiches that Allan prepared in her West End apartment. That was seven and a half years ago. Allan estimates she has spent about $30,000 of her own money -- or about $80 per week -- on food for Jen's Kitchen during that time.

Her roster of volunteers is about 100 total, and includes individuals and groups from various organizations like churches, the Salvation Army, and even members of the Vancouver Police Department Vice Unit. They help her make the sandwiches and hand them out. Volunteers occasionally pitch in for ingredients as well; the group from 10th Avenue United bring a snack to hand out but often bread and tuna as well.

We work the corners and alleys before heading to a seedy hotel -- Allan calls it a brothel -- on Hastings. "How many girls?" she asks a large man standing at the door. Ten. She counts out the appropriate number of sandwiches, snacks and juice boxes and stacks them in the man's arms. He is buzzed in. It's a place where sex workers bring their johns, Allan explains, and a room costs $20 an hour.

Feeling out of place

When Allan first came to Vancouver 12 years ago, she was homeless. "I had five cents to my name, I was severely alcoholic and crack addicted, and the survival sex trade was my work at the time," she says matter-of-factly. "That's what I did for a living."

The money she made on street corners would allow her to buy some groceries, or pizza. Allan says she avoided church soup kitchens because she felt out of place there.

"Of course, a lot of the churches have an open door policy," she says. "But when you're a survival sex worker and you're in your high-heeled boots and your short miniskirt and a revealing top, that whole welcoming thing seems to change."

Allan says by noon she was typically starving ("breakfast is a luxury down here," she adds), and lied to get into a centre for pregnant women that served meals. When they found out she wasn't actually pregnant, she wasn't allowed back. She also tried going to a drop-in for mentally ill people -- but wasn't mentally ill enough, she says laughing.

"It's interesting how all these feeding places had all these categories you had to fit into, and if you didn’t fit into it you didn't eat that day. Unless you wanted to sit on the street corner."

There are a few places that cater to all women, and exclusively women. The Downtown Eastside Women's Centre, for example, serves a hot meal in the afternoon seven days a week and has started doing breakfast on Tuesdays and Thursdays. According to fund development coordinator Fiona York, the centre serves approximately 300 women every day.

There's also Atira Women's Resource Society, which operates approximately 400 subsidized units in the city for women who are "by and large supporting themselves with survival sex work," says CEO Janice Abbott.

Abbott says there are "unique, gender related barriers" for all women trying to access food in the Downtown Eastside. When food lineups or food programs are co-ed they seem to disproportionately become male, she says, which can be intimidating for women who have experienced violence at the hands of a man. Sometimes women avoid those places altogether.

When asked if survival sex workers might have a harder time accessing food because of the hours they work, Abbott says "absolutely."

"Women who are out and about in the evening, if their main activity occurs after a typical working day, then there are less programs period, available. Also, the risk to them increases after dark."

Karen Cooper, a professor at Corpus Christi College, has spent the past two years researching the correlation between availability of food in single occupancy residences (SROs) like the ones Atira runs and the number of calls to police, fire and ambulance. As part of her research, she and her associates have interviewed hundreds of SRO residents -- including survival sex workers.

"The hardest story I heard over and over again is that even if there were meals in their residences, often they're out working during the dinner hour -- that's when a lot of people come into the Downtown Eastside to find prostitutes," says Cooper.

"They would be working over dinner, would work later into the night, realize they were too hungry to sleep and go out and turn another trick to afford some food. It took me a while to realize that what they were trying to tell me is that that's when they're more likely to get hurt."

Allan views her role as not just to feed women, but also to fight for their rights. On a typical Tuesday night, once all the sandwiches are gone, Jen's Kitchen becomes Vancouver Cop Watch.

On Hastings Street, Allan spots three officers talking to a young woman. "Get out your cameras!" Allan says. I pull out my Canon and the others hesitantly withdraw their cellphones. We stand and watch the exchange, which ends with no arrest, and then follow the officers down the street.

The role of Cop Watch, Allan explains, is to follow beat officers around and observe and take photographs of their actions, ensuring that the people's civil liberties are upheld and to intervene when they aren't. Most of the police around here, she says, know her by now.

Allan feels the attitude from police is that everyone living in poverty in the Downtown Eastside is a criminal. She acknowledges that some of them are. There are drugs, there is robbery. If anything, she says, she wants the Downtown Eastside enforcement beat to send a message to sexual predators that "our women and girls down here are not for them to pick up and hurt."