"I think everything around the life and the achievements of Dr. Jago point to him possessing the requisite skills to make some progress in what has been to date an intractable dispute where there's been little progress," Abbott told reporters.

Jago's previous position as head of the University of Northern British Columbia, his position on the Northern Health Board of B.C., and his appointment to the Order of Canada in 2004, are just some of the experiences and accomplishments that make Jago right for the job, he said.

He's also a past donor to the BC Liberal Party and the author of a 2006 report on education for the BC Progress Board that stakes out positions that critics say make him an unfortunate choice to mediate the current dispute.

"We know one of the issues at play that divides us very significantly at the table is the demand for strips around seniority, a very basic human rights issue for us, and there is evidence that Dr. Jago has a position on that issue," Lambert said during a conference call.

And as Austin put it to The Tyee, "It's challenging when someone's appointed who's already expressed their personal point of view."

Jago told media he'll be paid $2,000 a day for a task he characterized as "mission impossible" and "a shot in the dark," though he said he would not have accepted the appointment if he felt there was no chance of success.

He also acknowledged he has no previous mediation experience, but said he believes his time bargaining on the employer's side at universities in both B.C. and Ontario mean he can bring something to the table in the current bargaining stalemate.

"One would have to question the wisdom of the government for appointing someone like me, but I do have related skills, and maybe the fact that mediation hasn't worked out in the past has influenced the thinking that it's timely to take a new approach," he said.

"I go into this with a lot of related experience and with a passion for education and with a desire to help the parties solve their current problems, which I think is essential if there's going to be stability within the education sector, and a kind of stability that is of benefit to students."

According to Elections BC's donations database, Jago personally gave $1,000 to the BC Liberals in payments made in 2007 and 2010. Jago said the money was for entry to a golf tournament and that he normally does not contribute to political parties.

Jago is also the author of a report that described labour agreements as "constraining" leadership in the province's education system.

"Principals... are expected to be school leaders, but they function without the authority to select teachers when openings occur in the schools because seniority trumps all other qualifications within the framework of the labour agreement," Jago wrote in "Working Together to Improve Performance: Preparing BC's Public Education System for the Future."

"Nor do principals generally control district time or resources for teachers' professional development. Such control in many instances rests with the teachers," he said in the report for the BC Progress Board. "As a result, principals operate without the tools to change the methodologies or priorities of the teachers they supervise."

He concluded, "Principals occasionally find ways to work around these constraints, but this seldom happens without a struggle and usually with little recognition or reward."

Elsewhere in the 39-page report Jago suggested teachers are one of several groups looking out for their own interests in the education system. "An ungenerous characterization might describe it as a system in name only, consisting of a loose collection of interlocking autonomies, sometimes interacting amicably but more often represented by fragmented collectivities (unions and various associations including those for trustees, superintendents, principals and vice-principals, parents, Aboriginals), each defending or advocating their own special interests, all justified in the name of educational quality and for the 'sake of the kids.'"

Earlier in the report, he asked, "Within a highly decentralized system of education marked by a significant degree of autonomy at every level, often politicized by labour strife, and constrained by legislated processes and provisions as well as by labour agreements, is there scope for leadership at any level to effect necessary change?"

Education Minister Abbott said he read Jago's report when it was released and re-read it recently. "The report as I read it was a very constructive one. He's looking for ways to get the educational partners working together more effectively than had been the case in the past." 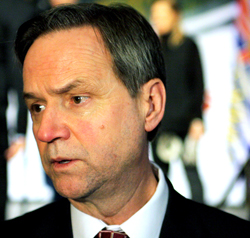 Education Minister appointed Jago, who said, 'One would have to question the wisdom of the government for appointing someone like me, but I do have related skills.'

New Democratic Party education critic Robin Austin said he was "a little surprised" by Jago's appointment. While he said he has met Jago several times and respects his work, he noted Jago's lack of mediation experience, his donations to the Liberals and the 2006 report.

"This is a very complex file and he has positions that are on the public record... which clearly states his opinions on a couple of issues that are very contentious and are an important part of his mediation in Bill 22," he said.

"Given the history between the BCTF and the government, it would have been more advisable to pick someone truly independent who isn't seen as having any favouritism to one political party or another," he said.

The BCTF president Lambert said she's concerned about Jago's biases, including those expressed in his report.

"This is a person who has ties to the Liberal Party, doesn't have experience in labour relations, is an academic researcher, and has no experience in the public education system has been commissioned to work for the Liberals at the Progress Board level and has done a paper," she said. "For me that rings alarm bells."

The union has publicly opposed the mediation process as outlined under Bill 22: Education Improvement Act, which requires a mediator's recommendations to stay within the government's net-zero mandate.

Nevertheless the BCTF had suggested Justices Stephen Kelleher and Ian Donald as possible mediators, but Abbott said both were unable to leave the court to mediate. Jago will be independent, and that this is a better solution for both sides than a legislated collective agreement, Abbott said.

Lambert said despite all appearances, the mediation process is not good for teachers. "It's like a Hansel and Gretel story," she said. "We're being led down a path, to a very fine candy-coated house, but inside there's a major risk for us. And that major risk, it seems to me, is a net-zero mandate and further concessions to our collective agreement."

The net-zero mandate means that there will be no money for wage increases unless savings can be found elsewhere within the collective agreement.

Abbott said that policy is not going to change: "I'm afraid there's net-zero possibility of the government deviating from what has been the basis, now, of 130 public sector settlements with virtually every union except for the BCTF."

The government could have legislated an end to the dispute with teachers, said Abbott. "We chose not to do that. We chose to put in place a constructed path for the parties that we hope will lead to a mediated solution here."

The report made six suggestions in the report for improving education, none of which directly addressed labour issues.

The government needs to make investment in education a priority, he wrote. "When investing in education, however, governments should not write blank cheques," he said. "Government should demand accountability and apply scientific rigour to determine if priority expenditures are producing intended outcomes and improving the educational system overall."

Jago has until June 30 to report back to the government, and said he plans not to talk more with the media until then.