As the government looks for ways to provide more timber to mills in communities affected by the mountain pine beetle kill, it will set precedents for logging companies in other parts of British Columbia, said the MLA for Cariboo North, independent Bob Simpson. 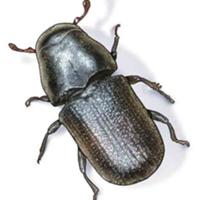 Nikiforuk: What the Bark Beetle Taught Me

"To me what they're asking for is a fight," said Simpson. "I have no problem being upfront and getting shot between the eyes on it, because it's bullshit."

The government is considering lifting the "constraints" set out in the Land Use Plan for the Cariboo-Chilcotin, said Simpson.

That plan, in place since 1994 and built on the Commission on Resources and Environment process that dates back to 1992, "incorporates the interests -- and meets the needs -- of the community and its people," according to the government's website.

The result of a long and wide consultation, often credited with diffusing the valley-by-valley war in the woods, it maps out what land is open to forestry and where other values take precedence.

If the government wants to reopen the plan, it should also reopen public discussion and bring in other stakeholders such as mining companies or guide outfitters who will be affected by the decisions, said Simpson. "Why do the timber barons get preeminence?"

Les Kiss, the vice president of forestry for the Coast Forest Products Association, left at least some people who heard him speak on a TLA convention panel in mid-January with the impression he favoured opening up the Vancouver Island Land Use Plan.

"We're not advocating reopening it, it's more assessing where you're at," he clarified in an interview.

The land use plan sets out general measures and defines various enhanced or special zones. "That hasn't really played out," he said. "Nobody's looked before. Nobody's really monitoring whether it's met its original objectives."

Plus there's the feeling that the plan is already under pressure from all sides. The 2007 Coastal Forest Action Plan found 3.1 million hectares were fully protected while 2.5 million hectares of Crown land were open for timber harvest, he said.

And yet, he said, "There are still pressures to remove more and more land base."

The decisions need to balance social, environmental and economic objectives, he said, suggesting the economic side hasn't been given sufficient priority.

While he said the government likely doesn't have the resources to revisit land use plans, the CFPA is pushing to have a "gatekeeper" approach set up as a pilot project in the area covered by the Vancouver Island Land Use Plan that would change how authorizations and approvals are made, he said.

Asked for specifics of how it would work, he said it is in the early stages and the details are still to be worked out. "We're doing some preliminary discussion with the ministry," he said. "It's not a done deal. We're hoping it will go off as a pilot."

And whatever the government does in the Cariboo-Chilcotin, it will be asked to repeat in the rest of the province, he said.

Timber supply is an issue that gained profile after the burning of the Babine Forest Products sawmill in Burns Lake earlier this month, with the mill owners saying rebuilding depends on whether "constraints" on the land base can be lifted to increase the amount of wood available, but it has been building for some time.

The Association of B.C. Professional Foresters raised similar concerns to Simpson's in a November 2011 report expressing the views of its members to Chief Forester Jim Snetsinger.

The organization was responding to a motion the Union of B.C. Municipalities convention passed in 2010 asking the forests minister for a cost-benefit analysis of the "cumulative impacts" of "constraints" like wildlife tree patches and visual quality objectives that are set out in land use plans.

"Our members think in terms of forest maturation cycles of 60 to 100 years," the report signed by ABCPF CEO Sharon Glover and director professional practice and forest stewardship Mike Larock said. "They do not support making short-term tradeoffs now that would jeopardize non-timber forest management objectives or the midterm timber supply if not supported by scientific research and consultation with the public."

The existing higher-level plans with their long-term view are still relevant, the report said. "The original reasons for the forest management constraints still apply."

Even if the government changed the management requirements, mills will still close, it said. "It will just postpone the inevitable fall down in timber supply. There was a concern that the consequences of such forest management decisions would be worse than the benefits derived from an increase in today's timber supply."

Patches of wildlife trees and areas managed as old growth would be "extremely difficult to recreate," in the future, it said.

They too worried that such decision making would spread. "While the provincial government's work on the midterm timber supply is focused on areas of the province that have been hardest hit by the mountain pine beetle, it is a concern that affects the entire province," says an accompanying advocacy report from the association. "It is important to consider what impact changing the management objectives or constraints in one area will have on another area."

Making any such changes requires public consultation "to prevent undesirable outcomes," it said. "Members pointed out that a gain to one group may be a loss to others and a theme that kept coming up was broad public input must be sought on these issues before decisions are reached on changes to forest management strategies."

Forests, Lands and Natural Resource Operations Minister Steve Thomson said in a Jan. 20 interview that despite the talk, there are no immediate plans to open land use plans in the Cariboo-Chilcotin or anywhere else.

Asked if that meant opening or altering land use plans, he said, "Not necessarily."

"We're looking at how we address future security and supply for the industry, but that does not mean opening up land use plans," he said. "People might interpret it that way, but it's certainly not the intention."

The executive director of the Truck Loggers Association, Dave Lewis, acknowledged there's been recent talk of reopening land use plans. "I know it's come back on the radar screen," he said. "I don't know why that is. I don't know if it's people aren't satisfied."

Land use plans are part of the discussion in various parts of the province, including Haida Gwaii and the Great Bear Rainforest, he said.

"I don't think there's anything that once you make a plan, whether it's local zoning or it's land use plans, that ever stay the same," he said. "The goal posts move very quickly and you're always going to be opening those up."

The CORE process was a brilliant move, that gained support for defining what would be operational forest and what would be parks, he said. "I think the key [to opening plans] is you do it in a strategic fashion and if we can do it and create more certainty than we had before, or we can do it and create better opportunities, I'm all for that, so I would never say that once you've made a plan you stick with it."

Communities make rezonings or changes to their official plans all the time, and that's sensible, he said. "I think they're doing that in this case."

Those discussions will involve the public, First Nations and other stakeholders, he said. "I think it's open to everyone, we've just been ahead of the curve."

The government may be looking for ways to lift constraints without opening land use plans, since opening plans would require going back to consult the public and other stakeholders, said MLA Simpson.

When logging companies, the UBCM or the government talk about "lifting the constraints on the landbase" it is clear what they have in mind, said Simpson.

The constraints are the zones to protect wildlife, old growth and other values set out in the land use plans, he said. "There are no other constraints on the land base."

Any move to lift those constraints should be done carefully and in full public view, he said.

The pressure comes at a time when there is much unknown about the state of the province's forests, Simpson said.

The model for assessing the annual allowable cut has not been substantiated for a long time and it's possible that climate change has already made it inaccurate, he said. At the same time, a recent forest practices board report found there were reasons to believe the inventory data are also inaccurate, he said.

The government is considering lifting constraints, he said, but "On the basis of what? The data is suspect and the models are suspect."

It's a time when government's forestry decision making should be more conservative, not less, he said.