They say that bullets don't lie. Nor do bark beetles. 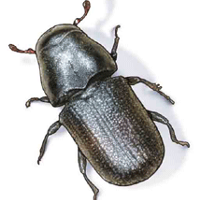 And that was my first lesson in the woods. Who would have thought that something as small as a grain of rice could transform a landscape five times the size of Vancouver Island into a ghost forest, and in the process also make mincemeat out of experts, government and industry?

I didn't believe it at first.

But the celebrated bark beetle logging company has dramatically reshaped the West by killing some 30 billion trees from Alaska to Mexico over the last two decades. This history-changing event, (and the beetle is not finished yet) also serves as an uncomfortable and powerful metaphor for the globe's teetering financial system.

Believe or not, an aging lodgepole forest bears an uncanny resemblance to the world's concentrated banking networks. It has no give, few players and has grown too dense and complicated. It's lost its energy to concentrated bigness and is now ready to collapse. Renewal, no matter how necessary, is rarely a pretty sight in a forest or a banking system. And government bailouts make matters worse.

PRAISE FOR 'EMPIRE OF THE BEETLE'

"This fascinating and thought-provoking book about an ancient insect pest exposes the frailty of seemingly stable man-managed habitats and presages the climate-induced ordeals to come." -- National Post

"... the world's only page-turner about beetles... [Nikiforuk] has a clear, muscular style and a masterful command of simile, metaphor and analogy to illustrate otherwise dull or obscure scientific data. His research is awe-inspiring, his conclusions irrefutable, and the implications dismal." -- Edmonton Journal

"A compelling look at what may be the single biggest impact of climate change, and a harbinger of life to come on a warming planet." -- New York Times

And that's just one of the surprising lessons that bark beetles taught me. I had no idea that a bullet-shaped creature, normally a rare and inconsequential forest resident, could suddenly burst upon the scene and change everything. This wild animal, which challenges our desires as much as grizzlies, simply caught me by surprise.

Beetling away for 300 million years

For starters, bark beetles outnumber us. There are 7,500 species on the planet. That makes them more numerous than mammals, and their numbers are declining by the year. So when bark beetles go a tear, we need to sit up and pay attention.

Bark beetles have also been pruning and weeding trees for 300 million years. They are the world's original forest managers and tree surgeons. Some species are fierce predators that even have a natural mandate to collapse and renew entire forests. Unlike most so-called forest managers, they actually know what they are doing. Not surprisingly, these highly social animals, which chatter like squirrels inside the bark of trees, don't work in a timeframe that we'll ever appreciate.

Nor does this tiny charismatic insect work alone. Every bark beetle is really a biological bus. On the crevices of its hard shell rides a host of friendly and often hostile passengers, including fungi, mites, bacteria, yeasts and nematodes (round worms), which in turn carry more varieties of fungi.

The fungi, all relatives of a kingdom that provide the world with its antibiotics, may even drive the whole beetle/tree system. Without them, the beetles have no nutrition. After they kill a tree, bark beetles also turn it into a temporary fungal garden to feed their young.

Bark beetles also share a number of similarities with human empires. They lie dormant for a long time and then quickly explode across the landscape. Once they've expanded their empire and eaten themselves out of house and home, they retreat and collapse. (But no human empire can re-engineer an entire landscape as quickly as a bark beetle.) They, too, attack in highly coordinated swarms. Watching a thousand beetles hit a pine tree is like watching a medieval army besiege a castle, but with one difference. The tree, a carbon castle, usually falls in a day.

Just about everything that governments and the logging industry have done to stop the beetle have made the problem worse. In B.C., massive clear cuts ruined watersheds, damaged roads, lessened forest diversity and impoverished communities by high grading non-pine species from the landscape. Government policy that lowered stumpage fees from $25 to 25 cents a cubic meter (allegedly to reduce fire hazards or to salvage beetle kill) ultimately impoverished the owners of the resource (the people of B.C.) and enriched a few corporations.

Instead of using the crisis as an opportunity to restructure a badly concentrated industry, the government continued with business as usual: it bailed out the big guys and let the little guys fail. But smart government (truly an oxymoron these days) would have reshaped the timber industry and its monster tree leases into community-based forests and smaller, more labor-intensive firms that added value to the resource. But that's real beetle proofing, and it never happened.

The history of beetle control, like most insect sagas, reads like a classic Shakespearean comedy. For 300 years, the authorities have tried to burn, electrocute, drown, gas, poison, explode and smother animals the size of mouse turds.

But guess what: they failed. The authorities always killed more trees than beetles, and when a cold spell ended the outbreak, the authorities invariably lied and claimed credit. The legacy is so horrible that Canadian provincial governments don't even want to spend money monitoring the failure of their billion dollar interventions in the woods.

Whenever people ask U.S. entomologist Jesse Logan what can be done to stop bark beetle storms, he calmly reminds them that they are natural events just like Katrina. "Could you build a fan big enough to blow a hurricane back out to the ocean?" asks Logan. He predicts that we'll see more chaos in the forest until we stop burning fossil fuels and plowing up landscapes. "What will happen will happen."

Climate change didn't cause the beetle hurricanes, but it did trigger these natural disturbances. Unlike politicians, insects respond quickly to changes in the climate. Warm winters and often-warmer summers gave the beetles unparalleled advantages. They reproduced in ungodly numbers. Just imagine a pod of 3,300 (60 ton) killer whales flying over Alaska's spruce forests for a decade, and you'll have a picture of the insect biomass at work in one epidemic.

But climate change also weakened the trees. A drought-stressed pine can't produce much resin, its first line of defense against beetles. And so white spruce, guardian of the north, the white bark, king of the mountains, the lodgepole, the teepee builder, and the pinyon, the feeder of civilizations, fell in unprecedented numbers. Every day, 100,000 beetle-riddled lodgepoles come crashing down in the forests of Wyoming and Colorado.

With the uncertainty created by climate change, scientists don't know how many landscapes will recover in the wake of the beetle. In Alaska, Canada grass has smothered the ground and new spruce seedlings too. Throughout the Rocky Mountain west, the white bark pine is disappearing from the tops of mountains. In New Mexico, aromatic forests of pinyon and juniper have been reduced to a single species: juniper. "You can't force something back to existing conditions when they no longer exist," notes Diana Six, a beetle expert at University of Montana.

So here are a few truths that the beetle had to tell us, and they are worth repeating to friends and relatives, even if these city dwellers don't think they have much to learn from trees or beetles.

Big things, the source of all social and political misery, always fail.

Small and improbable characters on the landscape invariably change history in unpredictable ways.

Aging forests, just like most corrupt financial or energy systems, will collapse whether we approve or not.

Humans love stability at any cost, but Mother Nature lives and breathes volatility.

A civilization that can't leave room in its forests for either fire or bark beetles has ultimately left itself no room to maneuver.

It is an accident waiting to happen.