For John Furlong, co-chairing the provincial government's Stanley Cup riot review required some interesting feats of work schedule juggling. He managed to bill for an hour spent on the project the same day he played in a high profile golf tournament in Vancouver, and billed for four hours of work the same day he gave an important speech to the International Olympic Committee halfway around the world. 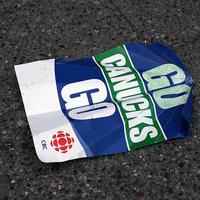 Furlong and co-chair Doug Keefe were both contracted for $250 an hour to review the circumstances of the June 15 riot. Their review, published Sept. 1, was called The Night the City Became a Stadium and was criticized for not blaming senior bureaucrats, police or politicians for lack of planning. A July 7 internal personnel list referred to Vancouver city manager Penny Ballem and police chief Jim Chu as the report's sponsors.

Furlong attended the IOC's 123rd session in Durban, South Africa where he delivered the Vancouver Olympic organizing committee's final report on July 7. His invoice to the government claimed he did $1,000 worth of work that day, according to documents obtained via Freedom of Information. [You can view the documents here.]

On July 20, Furlong was photographed in action by Reuters photographer Andy Clark while playing in the RBC Canadian Open Pro Am at Shaughnessy Golf and Country Club. Furlong billed the government for one hour that day.

Premier Christy Clark, who hired Furlong, coincidentally hosted a July 20 photo opportunity at Shaughnessy with fellow premiers to begin the annual Council of the Federation summit.

"I billed for hours I worked on the project and fit it into an already busy schedule," Furlong told The Tyee. "My availability was less than my colleague in Nova Scotia. It was a tight time frame for me so I worked every hour I had available including weekends to meet my obligation and the deadline."

"I have been traveling at odd times and short notice to accommodate needs in Vancouver. And it's a long flight," Keefe wrote. "I book lowest cost executive when it is available. It never seems to be available out of Halifax no matter when I book. The first trip to Vancouver was on short notice and it wasn't available either way."

'Higher than even my latest estimate': writer Muir

Keefe suggested in a July 14 email to Lynne McInally of the standards and evaluation unit that the same writer used for the Ottawa Police technical review of the City of Vancouver's fan zone be contracted for the entire report. No names were mentioned.

"I'm thinking that it may speed their work and ours if they can engage him immediately now that they've completed their first round of interviews," Keefe wrote. "Unless you see a problem with this who should arrange the contract."

On July 24, police services director Clayton Pecknold suggested the writers of the Braidwood or Frank Paul inquiries be sought. But Keefe notified Pecknold on July 27 that "it appears John has found a writer."

"I had a good chat with him and outlined what I take to be his duties: general editing of text prepared by various people or from various sources, synthesis of documents/materials, management of writing deadlines (whip cracking etc), advice on style, tone, and graphic portrayal of information," Keefe told MacLeod July 28. "I stressed that we don't really know how much of his time we will require or when. He is going to attend our staff meeting on Tuesday."

Former Vancouver Sun deputy managing editor Stewart Muir signed a $150-an-hour contract for "writing, editing and document coordination" on Aug. 5 -- the same day his wife Athana Mentzelopoulos was announced as Clark's deputy minister of corporate priorities. Mentzelopoulos, who was a bridesmaid at Clark's wedding, was on her second tour of duty as a B.C. deputy minister.

"As we near the finish line, I have exceeded the contract hours as the editing has proved to be even more time consuming than I expected," Muir wrote to MacLeod on Aug. 29. "We have been working a lot of very long days. Is it possible to touch base?"

He estimated it would be 170 hours. MacLeod told management services director Perry Clark: "We'll require an additional $7,500 for Stewart's contract. . . "

"The number of hours consumed in the closing phases of the Riot Review process have been higher than even my latest estimate owing to a very significant amount of revision and document complexity that I don't think was foreseen," Muir wrote Aug. 30. "I'm going to be deep in it for hours to come and then tomorrow will have its set of challenges, too, I imagine."

On Aug. 31, the day before the public release, Muir wrote "it's definitely headed for 200 hours."

Muir was in the news in November when the Victoria Times-Colonist revealed he was appointed vice president of communications and external relations for the Vancouver Island Health Authority on a one-year, $161,800 contract that was not advertised. Muir's appointment was rescinded after it became public.

The job he was going to fill was vacant since Neil Sweeney took leave of absence on March 14, the day of Clark's swearing-in, to become deputy minister of government communications. In December, Sweeney and Mentzelopoulos swapped their deputy ministerial jobs.

Furlong also had a hand in hiring IPS Consulting, the name of Terry Wright's company. Wright was VANOC's executive vice president whose portfolio included transportation and security. Wright was paid $27,839.50 to write a 39-page, Aug. 21-dated event planning, operations and crowd control summary gleaned from his experience at VANOC. It included a planning methodology and checklist for planning and managing major civic celebrations.

Furlong is Own the Podium's advisory board chairman and a director of Whistler Blackcomb and Rocky Mountaineer. Wright now runs KPMG's major events practice. The IOC broke from tradition and did not appoint them to the committee overseeing and advising organizers of the 2018 Winter Olympics in PyeongChang, South Korea.