If you didn't know anything about Vancouver and read "The Night the City Became a Stadium" -- the fancy title for the provincial government report on the 2011 Stanley Cup riot -- you'd be oblivious to the fact that Rogers Arena was just 400 metres away from where the city hall-sanctioned outdoor viewing party for 155,000 people turned ugly. 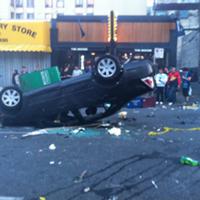 After Canucks Lose, Mayhem in Vancouver

And you might not know that Rogers Arena was the city's biggest legal drinking establishment open that night, where most of the 18,860 ticketholders were hoping to witness the Vancouver Canucks end their 40th season with their first Stanley Cup championship.

The crowd included Mayor Gregor Robertson and Premier Christy Clark, benefactors of campaign donations from club and venue owner Francesco Aquilini. Aquilini was hoping the Stanley Cup would be awarded to the home team in his "house," just like the Olympic gold medal was on Feb. 28, 2010.

Before the Boston Bruins scored the 4-0 goal into an empty net with less than three minutes to go, a fire alarm had been activated at 7:37 p.m. and "many people" were being thrown out of Rogers Arena.

How many people were kicked out? Where did they go and what did they do?

In fact, the report takes a hands-off approach to both the Canucks (who shared their record playoff profits with the National Hockey League) and Rogers Arena (the most important commercial venue for Furlong and VANOC).

"Inside the arena, events appeared to unfold normally," said the report. "There were signs of revelry and booing. While the fans were clearly disappointed they showed respect for the Boston Bruins victory. Gary Bettman, the NHL commissioner, was regrettably booed heavily when he presented the Stanley Cup to Boston.

"In discussion with the review, Mr. Bettman said he did not feel the atmosphere in the building was abnormal although he did acknowledge the excessive booing."

Bettman wasn't simply booed -- he was subject to two minutes of hate. Objects were thrown at him as presented the Stanley Cup to Bruins captain Zdeno Chara. But you won't find that fact in the report.

"We believe that the vast majority of people who came out of Rogers Arena went home," Furlong said at the Sept. 1 news conference. "Some people went to downtown and the rest went home."

Pressed further, Furlong said: "We can't possibly put every single detail into the report, we'd be writing for months. If they had made a significant contribution, we would have said so."

We know about the 446 police on duty whose numbers swelled to 928 later that fateful night when reinforcements arrived from the suburbs.

There were just eight liquor inspectors on-duty in downtown Vancouver beginning at 2:30 p.m. They apparently saw no evil indoors.

"There is strong evidence that the problem with alcohol on the night of June 15 was public consumption -- not licensed venues," the report said. "VPD and liquor inspectors both reported there were no infractions in licensed premises."

A self-authored report by the Alliance of Beverage Licensees of British Columbia, which is contained in the city's internal review, claimed its members sold 50 per cent less liquor on June 15, 2011 than on Feb. 28, 2010 when Canada won the men's Olympic hockey gold medal in Vancouver. ABLE BC -- which lobbies government on behalf of bar and private liquor store owners -- doesn't mention that the Olympic final began at noon on a Sunday and the Stanley Cup championship puck dropped at 5:00 p.m. The organization claimed its clientele did not match the demographic of the rioters, but conceded only two establishments that responded to its survey reported seeing a liquor inspector on June 15.

"After the second period, when it was clear to many that sadly our Canucks would fail to bring home the Cup, there started to be something of an exodus of people who decided to beat the crowds and go home after a long and disappointing day," said the ABLE BC report. "At this point, we had decided not to allow new people in to watch the end of the game, and instead focus managing the end of a particularly long day."

Is it possible that the cocktail of booze and disappointment manifested itself outside, away from the licensed establishments?

In 1994, the B.C. Police Commission report on that Stanley Cup riot closely examined how the publicly owned Pacific Coliseum functioned as both the site of a viewing party and one of the feeder locations to the riot that erupted at the intersection of Robson and Thurlow.

No punches were pulled. Language in the report took direct aim at the business of professional sports, which is deeply reliant on the sale and promotion of alcohol.

"Crowd behaviour is wildly unpredictable in the best of circumstances and the hype that follows major sporting events in this country, combined with a multimillion dollar marketing interest in linking alcohol to sport, is beyond the control of any local jurisdiction, no matter how well coordinated," said the report, ordered by then-attorney general Colin Gabelmann.

On June 14, 1994, the Canucks were underdogs in Game 7 of the Stanley Cup at New York's Madison Square Garden. The Rangers won, disappointing the 8,300 people who paid $5 each to watch on a big screen in the Pacific Coliseum.

There were no Vancouver Police officers on-duty in the Rink on Renfrew. The Pacific National Exhibition was watching its budget and thought 61 ushers and security guards would suffice.

Attendees weren't searched for drugs or alcohol, many brought their own. Some bought their two beer limit at the concession stands, then returned to the back of the line, only to finish them by the time they returned to the front to buy two more. The crowd got rowdy during the second and third periods, with 40 people ejected from the venue.

Not a dime offered by Canucks

Among the recommendations of Furlong and Keefe is to encourage the Canucks and the NHL to be involved with future public viewing areas, when and if the team challenges again for the Cup.

"The Canucks were busy managing their internal affairs as the hottest ticket in town. There is no compelling evidence of attempts to meaningfully draw the organization into the delivery of downtown activities," the report said.

History says it won't happen in 2012: in the NHL's post-original six era, only the 1984 Edmonton Oilers and 2009 Pittsburgh Penguins were losers one year and champions the next. What's more, Stanley Cup losers endure the shortest and longest summer of any of the 30 teams.

The limited time off is clouded by lingering disappointment.

After initially denying the rioters were their fans -- even though most sported official merchandise -- the Canucks are now extending an olive branch. Chief operating officer Victor de Bonis wrote to city manager Penny Ballem on Aug. 23, but stopped short of pledging to help pay for this year's debacle or underwrite a similar public event in the future.

Some 1,000 police officers, firefighters, paramedics and cleanup fans will be hosted during an exhibition game. De Bonis revealed plans for the Oct. 6 home opener. The franchise wants to display the "message of hope" plywood boards in the concourse, show images of the June 16 riot clean-up volunteers on video screens and recognize local heroes during player trophy presentations. In-house, broadcast and poster ads will promote responsible celebration and respect for fellow fans and public property. There may even be funding for "an appropriate youth education initiative."

That's nice, but it doesn't do anything to help the city wrestle with the $1.97 million cost. On Sept. 6, the Vision Vancouver majority will draw $1 million from its contingency fund to pay for the man-made disaster, money it won't be able to spend should the city get hit by an earthquake or a heavy snowfall.

Not bad for a summer job that is supposed to help politicians and police understand that terrible night when the city went crazy because of what went on inside 800 Griffiths Way.