[Editor's note: This is one of a number of profiles of municipal candidates running on hot-button issues around the province, a series published on The Tyee between now and election day, Nov. 19.]

Patricia Ross is no stranger to taking on big political battles in Abbotsford, B.C., against powerful foes. She helped turn back a Washington State plan to build a power plant just across the border. And lately she's been fighting a waste incinerator proposed for the Fraser Valley (see sidebar). 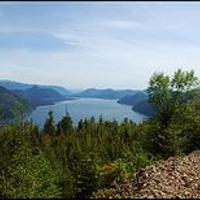 But this election the Abbotsford politician finds herself saying no to yet another big project with a lot of momentum behind it -- and it's making her feel lonely on city council, where she's held a seat for 17 years.

Ross is the sole incumbent to oppose a public-private partnership (P3) that would see the private design, build, partial finance and operation of a water works project in Mission's Stave Lake, a contract of 25 years.

Originally a partnership with neighbouring Mission as a way to address future water shortages, in April the district dropped out of applying for a federal P3 grant for the project, in the wake of strong public opposition.

To Ross, Abbotsford broke a "gentleman's agreement" by going ahead with the P3 without the partnership of Mission. But she has other concerns, including the private operation of the water system, cost uncertainties, and what she sees as the lack of choice given to the public in the matter -- concerns shared by other opponents, including some new council hopefuls.

Meanwhile, Abbotsford Mayor George Peary insists that the City has done its due diligence in seeking out the best, most cost-effective option to fulfill Abbotsford’s water needs, and that a Stave Lake P3 is the way to go.

Voters will make the final call on the Stave Lake P3 in an upcoming referendum on Nov. 19's election day.

'I was agonizing over this decision'

When The Tyee interviewed Ross in July about her position on the P3 water project, she declined to say whether she would campaign against it, but did say she’d been swayed by public input to view the P3 approach with some skepticism.

"It was probably because I was still at the point where I was agonizing over this decision myself," Ross says of the hesitation. "Doing the right thing, when everybody else at city hall seemed to be on board... that does make you question yourself."

Ross says that Abbotsford broke a "gentleman's agreement" by pursuing the project without Mission's support. "We did what amounted to a hostile takeover of the water system, without really so much as a discussion with our partners," she says.

Mayor Peary responded to that accusation, saying Mission made its own decision. He maintains that a Stave Lake P3 is the lowest cost option meeting water quality and quantity requirements for Abbotsford. That conclusion has been drawn after 10 years of study and investigation, he wrote in an email to The Tyee.

From a vantage point on Abbotsford's Eagle Mountain, Patricia Ross looks out over two of her biggest political battle sites.

To the south, in view, is the Washington State border.

Back in the early 2000s, Patricia Ross opposed the SE2, a proposed power plant just across that border in Sumas, Washington. She was appointed the City’s chief lobbyist against the plant, seen by the City as a major pollutant and involving the construction of a power line from the U.S. border through Abbotsford. After considerable opposition from the province as well, the power line was denied in 2004 by the National Energy Board, a decision upheld by the Federal Court.

A look to the east affords a view of the Fraser Valley airshed, a funnel-shaped corridor of greens and blues, dotted with farms.

It's a unique airshed, Ross says, one particularly vulnerable to air pollution. That's why she's strongly against a proposed waste incinerator for the area, part of Metro Vancouver's waste management plan that received conditional approval by the province in July.

Before building the incinerator, Metro Van must consult with the Fraser Valley Regional District -- of which Ross is currently chair.

"If we're going to say no to anything, then it certainly should be garbage, which is the most toxic, complex and unpredictable fuel there is," Ross said. "Why you would build something like that in one of the most sensitive and unique air sheds in the world just makes no sense whatsoever."

Building Stave Lake through traditional procurement -- a partner designing and constructing, with the City operating-- will cost about $328 million, according to City estimates. The City says it will cost up to $98 million less as a P3, in part because the project is eligible for a subsidy from the federal P3 Canada Fund, which has already promised a sum of up to $65.7 million.

While Ross agrees that Stave Lake is the best future water source of those evaluated, she worries about handing Stave Lake to a private partner. To her mind, the City would have little recourse should things go sour.

"These are multi-million dollar, high-level, high-power corporations," Ross says. "I have difficulty thinking that we can write an iron-clad contract that will protect us."

Water Watch Mission-Abbotsford shares some of Ross's concerns. The group formed in March 2011 specifically to pressure councils not to proceed with the Stave Lake P3, according to spokesperson Lynn Perrin, who is also a council candidate this November.

"What we're really, really opposed to is the commodification of an essential of life. That someone, some foreign consortium, is going to make a profit off our water," she says.

Mayor Peary refutes that characterization of the project. If Abbotsford is granted a license for Stave Lake water by the Province, he says that "at no point would a private partner have any ability to set water rates or water standards," or sell any of Abbotsford's water.

The private partner, he says, will ultimately be responsible to the City. "Contractual safeguards include financial penalties if performance requirements are not met, the ability for the City to step in if required at the private partner's cost, and default provisions and remedies that favour the City," he wrote.

"The City will have very strong control of the Project through the contract."

Other opponents have questioned the need to develop Stave Lake at all. According to the City, Abbotsford's current water supply will be tapped out after 2016. Pumping Stave Lake water into Abbotsford's system would increase the city's water supply with an additional 100 million litres of water a day, and the City expects that later phases of the project will increase to 400 million litres of water a day.

In an email to The Tyee, he says there's plenty of development potential remaining in Norrish Creek, which currently supplies 85 per cent of the city's water. Norrish is a better option, he says, because the creek's treatment plant is located at an elevation of 230 meters above sea level, and water is fed by gravity to the urban areas. Stave Lake water, on the other hand, would have to be pumped.

He sees the Stave Lake proposal as a "premature project brought forward by the desire to take advantage of a P3 federal grant."

"There are other more economic alternatives available, which will reduce the cost to Abbotsford and Mission water users," Regts says, citing possible supplies in Harrison Lake and Harrison River, or Chilliwack Lake. "A P3 program stands to benefit only the large multinational corporations for which the federal grant is intended to attract."

Peary, on the other hand, says that existing water sources (including the Norrish watershed) were found unable to "sustainably meet maximum day demands much beyond 2012 at current consumption rates." He said the City has thoroughly investigated many options, including Hayward Lake, the Fraser River, Chilliwack Lake and Harrison Lake, but that Stave Lake remains the best choice.

Ross isn't worried about staking herself as the sole incumbent opposing the Stave Lake P3, though she's received some pressure to back down. It’s her responsibility to present the facts, she says. "What people tell me is, they don't always agree with me... but [they] appreciate the fact that I'm bringing up risks."

While the rest of council is united in its support for the project, a number of new candidates are campaigning against those risks as well. Of the mayoral candidates present at a recent debate, all but Peary expressed opposition to the Stake Lake P3. The issue is more divisive among the 21 councilor hopefuls. (For more on individual platforms, find Abbotsford election candidate profiles on the Abbotsford Times website here.)

The P3 was the number one issue at a recent all-candidates mayoral debate, according to the Abbotsford Times, though increasing property taxes, the Heat hockey team subsidy, housing issues, transit, crime and the Taboo sex trade show were also discussed.

Whatever the outcome of Nov. 19 election and referendum, Ross says she's done her job if speaking up encourages voters to look at both sides of the issue.

"Maybe I'm wrong, maybe this will all play out exactly the way [the City] expects it will, and that's fine too,” she says. "But this is the way I saw it. I felt like I had to say something."