In Canada, parents are usually the ones stuck packing their kids' lunchboxes. 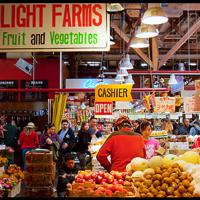 Food Now on Plate for All Federal Parties

However, climbing rates of childhood obesity, with one-quarter of kids overweight or obese, and rising poverty have some wondering if we shouldn't try a more strategic approach to this burgeoning public health problem.

For many, this means starting at school.

"The need for school meal programs has already been acknowledged by every province," says Bill Jeffery, director of the Canadian branch of the Centre for Science in the Public Interest (CSPI).

In Canada, provinces provide some funding to subsidize meals and snacks -- B.C.'s Fruit and Vegetable Nutritional Program is one example -- and they regulate food and beverages sold by school vending machines, cafeterias and fundraisers.

Jeffery doesn't think the provinces are doing either job very well. "The whole point here is more kids are suffering health problems as a result of poor diet."

Six years later, nutritional guidelines for food and beverage sales are now in place in all provinces and the Yukon territory.

A 2007 report card issued by the CSPI rated each of the provincial guidelines against standards set by the Canada Food Guide and the U.S. Institute of Medicine. It found "weak nutrition standards that permit the sale of nutrient-poor food," wide variation between provinces, and virtually no public information about whether schools were complying or not.

Anecdotal evidence, at least, suggests that they're not.

Along with more stringent nutritional guidelines, the centre advocates for federal dollars for a "pan-Canadian" school meal program to replace what has become a patchwork of provincial subsidies, corporate donations, parental volunteer efforts, and non-profit pilot projects.

Comparatively, average support for each Canadian student is about $5.95 per year. In the U.S., federally funded school meal programs total $212 per student per year.

A link between good nutrition and learning outcomes is well established, and for a long time school meal programs have been framed as a public health and social policy issue.

More recently, the environmental movement had shifted its attention to food as a vehicle for its priorities, helping make food a campaign issue for the first time in the last federal election.

"We have accepted that health is a public responsibility and everybody knows that food is the basis of health," says Cathleen Kneen, chair of Food Secure Canada said at the time. "If you send kids to school who haven't had food to eat that morning, how on earth do you expect them to learn?"

During that election, Kneen was one of many to point out that Canada is the only G8 country without a national school meal program.

France has a highly-regarded universal school meal program that costs about $6.40 per child per day. Half is subsidized by the government, and parents pay the rest according to household income.

Elementary school children in Japan eat lunch that is prepared and served on the premises. A typical lunch might include miso soup, tofu, milk, rice and vegetables. Parents pay about a third of the cost, and subsidies are available for low-income households.

In Sweden, a typical lunch consists of meatballs, potatoes or cabbage rolls and salad. It's free for every student -- in fact, elementary and secondary schools are forbidden to charge for meals.

But these programs have been entrenched in the culture of these countries, and the Canadian context is much different. For starters, the majority of elementary schools here don't even have kitchens or cafeteria space.

We're also a geographically and culturally diverse country, more like America than France.

So is the U.S. National School Lunch Program a model to follow?

In 2009, $9.8 billion fed more than 31.3 million American children, and all meals and snacks are subsidized to some extent. Families with incomes at or below 130 per cent of the poverty level pay nothing, while families with higher household incomes pay about $2.30 per lunch.

While the program has garnered a fair share of nutritional criticism, including an unfavourable comparison to prison food, research has found that a free meal at school can help break the cycle of poverty.

"Canadians spend a lot of time flattering ourselves that we're more socially conscious and socially just than the Americans," says Jeffery. "This is one issue that they're light years ahead of us on."

Will Valley, a UBC graduate student who is trying to create school food systems within Vancouver, has some reservations about a federally-run system.

"Every locale has a different food culture," says Valley. "If the federal government wanted to interfere and say everyone eats this, everyone eats that...," he shakes his head. "I'm not sure."

"If it was money from the federal government to support regional and local food systems and autonomy, that would be great."