Voters are hungry for food policy. All five federal political parties apparently think so, given that each of them has made a national food strategy part of their platforms this election. It's a first, and food advocates across the country are pleased to see it. 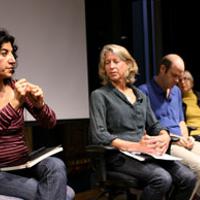 Liberal leader Michael Ignatieff was out front, and now the NDP, Conservative, Bloc Quebecois and Green parties have followed suit with their own promises to support a Canadian food policy in some form or another.

Many developing countries, after all, including Brazil, India and Bangladesh already have long-term policy goals and plans around food security.

Last year the governments of Britain and Australia committed to developing national food strategies and the call for a similar plan here in Canada has been growing from a chorus of diverse interests: farmers, industry, consumers, social justice non-profits, environmental NGOs and academics.

They all agree on one thing: in the face of global food shortages, climate change and a growing world population to feed, Canada needs to have a national discussion about food. What is much less clear is what should be included in a national food strategy, and how the federal government should pursue it.

Looking ahead five years and more

"It's rather audacious for us to think that at the national level we can develop a detailed strategy," says Garnet Etsell, chair of the BC Agriculture Council (BCAC). The BCAC is one of the members of an industry-led working group that has the ear of the federal government and has spent the last year developing a national food strategy.

Sponsored by chemical and biotech company Syngenta, with representation from processors and producers associations, the working group's stated mission is to develop a "long-term strategy for the Canadian food system together with all players along the food chain from primary production, input, distributors, processors, retail and consumers."

All laudable goals, and, as its authors point out, intentionally vague.

Etsell says it's up to various commodity organizations and provincial agricultural organizations to take the thrust of the strategy "and own it and implement it."

"The point is that we're trying to drive with government is that we have to start thinking in terms of these longer-term goals and strategies," says Etsell. "Planning beyond a five-year budgetary cycle would be a good start."

The Conservative platform, which is primarily focused on agriculture and agri-business, continues this pattern with a promise of $100-million over five years to build capacity in the Canadian Food Inspection Agency, which has come under criticism for being understaffed since 2008, when a CFIA scientist leaked a report that showed the Conservative government was planning to transfer key aspects of food inspection to industry.

"A lot of the programs and policies that we have in place have been developed as a knee-jerk reaction to some crisis or another," says Ron Bonnett, president of the Canadian Federation of Agriculture, which spearheaded the National Food Strategy working group. "We need to take a step back and look at where the export and domestic markets are going."

Laura Telford, national director of Canadian Organic Growers says the Harper government's failure to take into account public and market concerns about genetically modified (GM) seeds and pesticide use on crops has been "discouraging."

"The government's line has basically been that it's not scientific to look at what consumers and markets want," she says. She uses Bill C-474 as an example, which was introduced by B.C Southern Interior MP and federal NDP agriculture critic Alex Atamanenko earlier this year. The bill would have forced government to look at the economic impact of introducing GM crops into the country.

"We want government to take into account what people want to see on their plates before they just blanket introduce a new product," Telford says.

Various polls have shown that, while there is low public understanding of GM foods, the majority of Canadian public would be less likely to buy GM foods if they were labelled as such.

There is also increasing public and farmer concern about heavy use of a chemical called glyphosate (found in the herbicide Roundup), which has led to the proliferation of Roundup-resistant weeds.

On March 18, consumer and environmental groups filed another in a series of lawsuits against the U.S. Department of Agriculture for the agency's approval of more Roundup Ready crops -- GM crops that are designed to withstand high doses of the Roundup herbicide.

"It's unlikely in this climate that [government] is ever going to invest massively in organic agriculture," says Telford. "What we're asking for is a plan to develop a national eco-agricultural strategy that would move all farmers towards better agricultural practices in a way that Europe is doing."

These programs essentially pay farmers to maintain the ecological integrity of their land, such as preserving wetlands, buffering water systems, or setting aside marginal lands for wildlife.

"When we studied those programs, we found that organic farmers do better because they find it easier to adapt to these practices," says Telford.

No school lunch program yet

Linking food to diet, nutrition and a growing obesity problem in this country are also important pieces of a national strategy, says Cathleen Kneen, chair of an organization called Food Secure Canada.

Canada is the only G8 country without a national school lunch program, Kneen points out. "If you send kids to school who haven't had food to eat that morning, how on earth do you expect them to learn?" she asks. "It's unbelievable the number of people in this country who are choosing between food and rent."

While none of the parties have included such a national lunch program in their platforms, all four opposition parties have pillars that include increased education around nutrition and health, particularly for students and children. The Liberals also promised new restrictions on trans-fats and sodium.

Food Secure Canada is one of the funders and architects helping shape the People's Food Policy, which is set to release its recommendations for a national food strategy on April 18.

"The fact is we're facing climate change and the end of fossil fuels. We need to have food systems that are resilient. The less you're dependent on something coming from somewhere else, the better off you're going to be if things start turning sideways."

With an emphasis on localizing food systems and putting more growing power into the hands of the average person, Kneen acknowledges that it was difficult to determine the federal policies.  "

Many of the requirements for a sustainable food system are polices that would be implemented at the provincial, municipal, school board or hospital level," she says.

The Green Party and NDP both included commitments to expand farmers' markets and co-operatives across the country, and the NDP has promised more appropriate regulation for small-scale operators. The Bloc Québécois, NDP and Green Party specifically have "food sovereignty" as platform pillars.

"The point, we've never had any parliamentary debate on food in this country," says Kneen. "Given that we have accepted that health is a public responsibility and everybody knows that food is the basis of health, that's crazy."