On Jan. 1, Darren Barefoot, like thousands of others around the world, went on a diet.

How We Are Outsourcing BC

Barefoot isn't counting calories. Instead, the Vancouverite made a commitment to cut back on imported goods and buy only Canadian products and services for an entire year. He's tracking progress on his website, which also lists his definitions of "made in Canada": the product has to be at least one of designed, sourced or manufactured in the country.

His message, ultimately, is about "thoughtful consumption," says Barefoot. "Looking more carefully at what I put in my home and put in and on my body."

Barefoot joins a host of other writers who have undertaken similar personal quests and commitments to honour the fact that the choices we make at the till do have a ripple effect, on the economy and the environment.

There was the 100-mile diet of course, in which Vancouver couple James MacKinnon and Alisa Smith ate only foods which grew within a hundred miles of their home. More recently, New Yorker Colin Beavan, No Impact Man, gave up coffee, tea, escalators and "needless consumption" to reduce his and his family's environmental footprint as much as possible. The Great American Apparel Diet started with 20 women vowing to not buy any new clothes for a year. Now, it's grown to include hundreds of people in dozens of countries.

"Why did I feel like I needed so much? And why was I contributing the incredible waste we Americans create when I knew better?" founder Sally Bjornesen told Time Magazine last year. "These were the questions that led to The Great American Apparel Diet."

So entrenched are we in this manufactured desire and drive to buy stuff, no wonder it seems that an all-or-none approach is required to leap off the treadmill of consumerism. While the hardcore experiments above might be good for personal insight, or even better, drumming up publicity for a book deal, they likely aren't going to be adopted by a significant percentage of the population.

But if a large number of people change their shopping habits just a little, could it make a difference? Barry O'Neill thinks so. He's the president of the B.C. chapter of the Canadian Union of Public Employees, which last Friday, kicked off its Ten Percent Shift Campaign to encourage British Columbians to shop locally and support local economies.

"Revitalizing community economies by investing in local products and businesses is the first step towards British Columbians taking more control of their own future," he told the audience at the campaign kick-off in Langford.

"People are overwhelmed by the whole issue of economics, and developing new revenue streams," O'Neill told The Tyee.

"All we're asking people to do is have a look and see if they can shift 10 per cent of their budget to a more local organization. That might not mean that everything in that store is made in the community, or B.C. or even Canada. But at least you're contributing something to that local business."

The shift that this campaign represents is in one way a new direction for the public service employees union. After all, labour and business interests have been often opposing forces. Buy local is aimed at supporting local businesses -- not necessarily those which are union shops. Where they do agree is on strong local economies.

"It's not a union thing," acknowledges O'Neill, "but it's, I think, a position that the labour movement generally speaking should get behind. We're members of our community first."

Research supports O'Neill's conviction that these kinds of campaigns really can make a difference in a local economy.

The U.S.-based Institute for Community Self-Reliance has studied the impact of buy local campaigns on independent businesses for the past four years.

About two-thirds of all respondents believed that "public awareness of the benefits of supporting locally owned businesses has increased in the last year."

"Just one time out of 10, before heading to a chain store or restaurant, take that business to a local. This would generate $140 million in new economic activity, 1,600 new jobs and $50 million in new wages," concludes the report.

Government procurement, with its millions of dollars of purchasing power, is vitally important to supporting buy local initiatives, says O'Neill.

In a recent Tyee article, James Fletcher, a researcher with the non-profit Think City, and Doug McArthur, a professor at the school of public policy at Simon Fraser University, proposed local procurement policies as a way to stimulate lagging economies, especially in rural B.C. communities that have seen local economies decimated by the loss of industry jobs.

But we lack such policies at a provincial level. California, for example, passed a law to grant local, independently-owned small businesses a five per cent preference when competing for state contracts. This law also sets goals for state agencies, to make at least 25 per cent of their purchases with small businesses.

The State of Illinois recently passed a Food, Farm and Jobs Act to give preference to local producers when it comes to state agencies' food budgets.

San Diego, instead of just trying to prop up small businesses in an increasingly competitive world, has tried to tackle the big box chains often responsible for driving them out of business. In 2007 and 2010, council enacted two separate ordinances that require the city to review the economic and community impact of large-scale retail stores -- stores over 50,000 square feet and supercentres over 90,000 square feet -- before deciding whether or not to approve them.

The makers of a recent PBS documentary Fixing the Future, focused on a buy local campaign in Bellingham, Washington, interviewed author David Korten, who put it this way:

"Wall Street is basically dedicated to eliminating jobs or outsourcing jobs in order to increase financial profits of the biggest corporations, to increase the financial assets of the world's already richest people."

Fixing the future, he said, is about creating a financial system "rooted in the community and accountable to community interest, and that operates by life values rather than financial values." 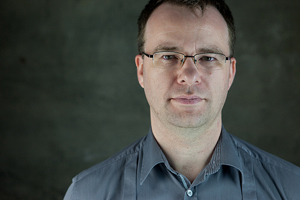 Darren Barefoot: 'It can only help to spend... on Canadian products.'

Barefoot has chosen to focus on a different product each month, which cumulate over the entire year. This month, it's clothing; a tough category.

Finding clothing that is actually sourced, or even manufactured in Canadian is basically impossible. "We make no wool," says Barefoot. "We don't even make cotton in any sizeable numbers."

Unions have watched the disappearance of manufacturing jobs for the past three decades, says O'Neill.

"It's gone to an all-time low," he says. "It seems to be that we have come to a point where we don't find any value to producing anything ourselves."