In the 1990s and early 2000s, exposing sweatshop conditions in garment factories was the student activist cause du jour -- but more than a fad, it was a lasting, hard-hitting movement that permeated into the mainstream. Activists spread the truth that workers in foreign factories who make our clothes, toys and sneakers are paid a pittance, subject to abuse and union-busting, and sometimes even live under slave-like conditions such as being locked in their factories. 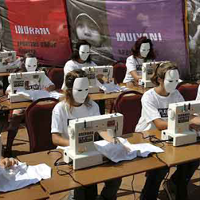 Can Vancouver Fend off Olympics Sweatshops?

Students, labor organizers and union members marched side by side, leafleting in front of Niketowns and Disney stores, occupying college administration buildings and urging passersby to be wary consumers of big-name brands. For several years when I was in high school and college, I enthusiastically participated in all those activities as part of this movement, along with many of my peers and friends. Everyone knew the chant: "What's the Gap Got to Hide? Sweatshop Made, Sold Inside."

Members of United Students Against Sweatshops turned their organization into the powerhouse student labor activist group. For years, they brought administrators at schools from the Ivy League to dozens of state schools, as well as corporate megaliths such as Russell Athletic to the negotiating table to convince them to rehire workers and pay them living wages. But now they are also singing a different tune, something along the lines of: "Buy These Clothes! (Just Not Those)."

"For the first time, I can wear my Badger sweatshirt knowing it was made in just working conditions," wrote Jonah Zinn, a University of Wisconsin student and USAS organizer, last month.

That's because of a revolutionary new factory in the Domincan Republic, started by one of the most conscience-minded college apparel suppliers, Knights Apparel, as a model and a test case of what can happen when wages are "living" and union organizing is allowed. According to a 2008 New York Times feature on the factory, Knights Apparel CEO Joseph Bozich was already known for complying with the Workers Rights Consortium, the most labor-friendly and stringent monitor of working conditions, but he wanted to do something even more.

"Before there was a union there was abuse, both physical and verbal," Martiza Vargas, a union leader at the old and new factory told AlterNet through a translator over the phone. "When I say that, I mean obscene words, pushing workers. On one occasion they slapped a worker so hard she literally fell out of her seat. One of the managers kicked one of the chairs under one of the employees and she fell.

"It was totally prohibited to even talk about unions," Vargas said. "On two occasions they fired workers for even just talking about a union inside the factory."

Still, Vargas and her tenacious fellow workers -- with the help of the international labor community -- persevered over the six years she worked at BJ&B and formed a union. She says then "things were able to change a little bit." The harassment and abuse stopped and the group of workers made tiny inroads in terms of salary and small improvements in working conditions. Still, the money they made was "nowhere near a dignified salary that we really needed to live and cover our basic needs," she says. In fact, many families remained separated because parents did not have the money to provide for their children.

And then one day they woke up to find the company was leaving -- moving to a country with cheaper labor and less protection for workers in the endless capitalist race to the bottom. Thanks to unionization, the workers at the factory gained severance pay, but when that ran out, there was nothing for them in Villa Altagracia and many had to leave town or even the country to find work. "It was like that until the Alta Gracia factory opened in Altagracia," says Vargas.

A new model of consultation

Everything changed when Bozich, inspired to give more back to the workers for his company, decided to partner with the Workers Rights Consortium on a model factory that would supply apparel to colleges around the country. The WRC pointed him to the former BJ&B site, and Knights Apparel began consulting with the former workers before it even opened.

The shirts and hoodies at campus stores around the country cost essentially the same as those from rival companies, although the labor costs are much more. The company eats the extra overhead -- it's not charity, but a smaller profit margin for the benefit of creating a sustaining living structure for workers.

And on a ground level, it's working for the 133 workers (BJ&B employed many more). "Now for the very first time we're earning living wage," says Vargas, who is the secretary-general of the union at the new factory. "Our children can get educations and us as well," enabling upward mobility. Vargas' son is taking a technical supplementary course, for instance. Workers are able to borrow the money to build bigger, more sturdy houses and properly feed themselves and their kids, and other businesses in the village are flourishing as the workers spend money on necessities. The living wage they are paid, far above legal minimum wage in the DR (but below minimum wage here), is calculated by what can sustain the workers' families in the Dominican Republic's economy, including food, shelter, health care, and a bit of savings.

The new factory's other benefits are more humane and less economic. "More importantly, families were able to reunite," Vargas says. "That's been one of the best things, families being able to be together again."

One of the most fascinating aspects of the Alta Gracia process is the union. While other more worker-friendly factories and clothing companies -- even L.A's own American Apparel -- have guaranteed above-minimum wages and decent conditions, the right to organize is one that often makes even somewhat generous-minded executives squeamish, even belligerent.

Not at Alta Gracia, though, where the union flourishes and takes part in meetings with management. At BJ&B, the workers made huge personal concessions -- including the risk of retaliation and intimidation, being "fired and humiliated" -- to unionize. Being out in the open, and consulted by management, is a sea-change for the workers.

But the project, which is already proving successful on a local humanitarian level, can only work if consumers respond. Alta Gracia apparel has labels that explain the good it's doing, but as it sits next to Nike and Adidas, will students choose conscious over status-conscious? Only if the idea gains steam and the brand catches on, kind of like fair-trade coffee for the collegiate fashion set.

And it's a test for campus organizers, who have been unrelenting in their push against powerful entities, and now want to do something a bit more nurturing, stylistically. "We've proven our ability to break brands; now it's time to make this living wage, union factory grow," wrote student activist Zinn.

The success of the brand is more than just an idea; it holds the dreams of 133 workers, and others who might be influenced by its success. For Vargas, that means "I am saving up to be able to buy a plot of land, so that for the first time I can be a homeowner on my own land."