Salmon of the Future

Last year's crash of the once mighty Fraser River sockeye salmon run has raised alarms about the fate of the prized fish in B.C. waters, the focus of the Cohen Commission inquiry this week. 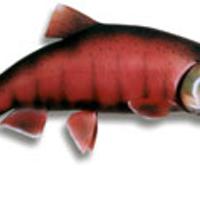 But one member of the sockeye family from the Fraser River watershed's Harrison River appears to be thriving. For the past five or six years Harrison sockeye have seen a population boom.

"We'll get a couple of hundred thousand some years, when in the past they may have been in the tens of thousands," says Scott Hinch, fisheries biologist at the University of British Columbia. "They're still on these abundance cycles, like all sockeye, so you have to account for that. But generally their numbers are going up fairly fast relative to the others."

Harrison sockeye are different from other sockeye. For most sockeye, fry leave the river for a lake where they eat plankton for a year or two before smolting -- a complex physical change -- and swimming to marine waters. In B.C., that migration is anywhere from one to 1,200 kilometres depending on where the fish have spent their youth.

Like pink salmon, which, as we reported yesterday, appear to be weathering changing conditions in B.C. waters better than other salmon, Harrison sockeye swim straight to the ocean. Exactly when they do that in spring is unclear, but it's definitely at a different time than the pink and the other sockeye salmon populations.

The Harrison sockeye juveniles also appear to stay in the Fraser estuary for about five months before heading out, probably migrating through the Juan de Fuca Strait and up the west side of Vancouver Island. Other sockeye populations swim the east side.

The inevitable question is, are they better off because they miss the fish farms on the northeast side of the island? The west side of Vancouver Island also has fish farms, though not as close to migrating fish as the east side.

"It's just speculation and that's only one of the issues," Hinch says, emphasizing the word 'one.' "But it's intractable from the issue that [Harrison] are experiencing completely different growing conditions, completely. It's probably an apples and oranges comparison, so you can't really separate the two. It's not just where they go, it's when they go."

Timing is everything. And it looks as if the Harrison sockeye have good timing -- they encounter lots of food and/or less competition. No one, however, can say exactly what's happening.

Deepening a shallow pool of knowledge

"[Harrison] is a population of sockeye that's really poorly studied," says Dick Beamish, a Department of Fisheries and Oceans biologist in Nanaimo. He adds that Harrison sockeye only make up two to three per cent of sockeye production on the Fraser River on average. "It's only been in recent years that we've been able to do these stock identifications using DNA, the first time that's been done [on juvenile Harrison sockeye in the Strait]." The DNA analysis only covers 2008 and 2009.

To pinpoint the exact date the fish enter the Strait, Beamish is looking at the growth rings -- think of tree rings -- of the otoliths, ear bones in a fish's head. You need a microscope to count the rings, and with chemical techniques otoliths reveal when a fish hatched, when it migrated, and the temperature of the water.

Even if juvenile Harrison are superhero sockeye, they remain masked because no one has studied their physiological performance. Hinch and his crew have looked at adults and so far they're not extraordinary. At least, not in swim tube experiments, or size, and they're not the Lance Armstrongs of heart pumping ability.

"Nobody has ever looked at them in any detail other than some experiments we've done and it's a pretty cursory examination," Hinch says. It would help if fish were tagged and scientists could follow their movements. Hinch's team tagged a couple of hundred Chilko fish this year but Harrison sockeye are hopeless. They leave the river as newly emerged fry maybe 50 millimetres long.

"There's no transmitter around small enough that we can put into them," Hinch says. The only way to track them is with research trawls, which is what Beamish does. Trawling, however, leaves out answers to how the fish got there, how long they were there, and where they spent their time before they were caught.

Ask Hinch if one change in the environment really leaps out at him and he says how fast pH levels have dropped and how that affects food webs. "If you look at the west coast of Vancouver Island, the productivity patterns are better than they are on the inside, at least they have been the last couple of years," Hinch says.

This July, Debby Ianson from the Institute of Ocean Sciences and other scientists will take a month to test ocean chemistry in coastal waters, chugging along the inside of Vancouver Island to make measurements and then coming back along the west side, where most of the work is done.

About the only thing Ianson can say for certain is that globally ocean pH is dropping and this would be no different for B.C. waters. And on the east side, the pH may be lower than on the west because of the influence of freshwater from the rivers, although that's even hard to say because if river water flows over limestone, it buffers the affects of acidification. Whether the great carbon dump into the ocean would impact east side waters more than west is a good question.

You can't casually toss around the word "adapt" when talking about evolution and climate change. So when you consider the success of Harrison sockeye and pink salmon right now, it's their life histories that keep them off the list of dwindling stocks. (Life histories, as explained in the previous article in this series, are the strategies organisms use to stay alive long enough to reproduce.)

Meanwhile our own life history keeps so many fish on the at-risk list -- especially bigger predatory fish like salmon. The more rare a fish is, the more we want it.

A taste for extinction?

Unless you're a Buddhist or some other appealing spiritual seeker, humans are a status-conscious primate. How else to explain that in the past century seafood recipes in cookbooks have called for more and more prestigious fish -- read "harder to get and more expensive" -- in tandem with plummeting populations?

In a study for the U.S. government's Northwest Fisheries Science Center in Seattle, Washington, biologists collected 3,092 seafood recipes from 105 cookbooks dated between 1885 and 2007. They noted each marine species in a recipe and assigned it a trophic number. The higher on the food chain, the higher the trophic number. A change of 0.15 is considered significant. Over 122 years, the average trophic level of recipes rose to over 3.4 from 2.92.

By this measure, sockeye (sorry Harrison, even though your scales give you away, not just DNA, to most cooks a sockeye is a sockeye) should show up in newer cookbooks more often than pink. With scarcity, however, taste has a peculiar way of changing. After all, it was once considered cheap and rude to feed your servants the equivalent of spam more than three times a week.

That would be lobster.