Salmon of the Future

Salmon have been around for about six million years. Big-brained humans -- most likely our ancestors -- arrived only about two million years ago, possibly because they started eating so many fish and other aquatic delights. The irony is, of course, lost on the salmon. 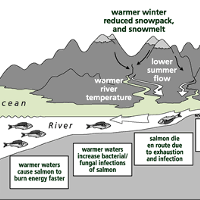 BC Salmon Future in Hot Water

This week in Vancouver, a federal inquiry begins into the decline of sockeye salmon on the Fraser River. The Cohen Commission, headed by British Columbia Supreme Court judge Bruce Cohen, will sift through every investigation and report on the sockeye, try to make sense of the decline, and come up with recommendations on how to reverse it.

On the commission's science advisory panel University of Washington professor, Thomas Quinn, the author of The Behavior and Ecology of Pacific Salmon & Trout. The book has 30 pages of cited references for 328 pages of text, and gorgeous salmon illustrations, especially the sockeye with its crimson sides and green head. To humans, red means good eating. Contrast that with green -- we're also attracted to color opposites -- and sockeye are eye-catching and look delicious. Surely a recipe for disaster when humans are your predator.

Quinn's book is a good place to start if you want to find out that yes, salmon have been around longer than us. But maybe more importantly, he tells you that sockeye and the other four beloved -- and tasty -- Pacific salmon populations have only been around for about 10,000 years, since the glaciers retreated and salmon could once again swim to ice-free streams and rivers. And they probably evolved pretty rapidly. This, in a way, is encouraging. Might the mighty fish adapt to changing environmental conditions quick enough to save themselves?

Maybe. Like other animals -- including humans -- a lot depends on how diverse the gene pool is and if their life histories can exploit the changes to come. ('Life history' is the strategies organisms use to stay alive long enough to reproduce.) Enter two fish: one is a sockeye from the Fraser River watershed's Harrison River, the other is pink salmon, the newest and most abundant species in the Pacific salmon genus.

The catastrophically disappointing return of the sockeye in 2009 overshadowed the success of the pink run. Pink salmon return odd years to the Fraser River and they returned in record numbers in 2009 -- early estimates were 17.5 million fish, maybe more. Prior to last year, that number was 26 million, and the average between 1959 and 2007 was 11.6 million. Pinks fared remarkably well in the other Pacific fisheries too: Russia, Japan and Alaska.

All Pacific salmon species face tough conditions: industry can destroy spawning channels, physically and through toxic contaminants; over-fishing reduces populations; hatchery-raised salmon can reduce genetic diversity in wild populations; and sea lice infestations from fish farms expose young wild salmon to a parasite that can weaken or kill them. Talk to a number of ecologists, fisheries biologists, and population geneticists, and the top two worries are habitat loss and climate change. Climate change, however, tends to loom over everything because climate has had a big impact on the fauna we see today: which vertebrates have gone extinct in the past, and which have survived.

Ask biologists why pinks might be doing an evolutionary end run, and it comes down to their life history. Vladimir Radchenko, principal scientist of the Sakhalin Research Institute of Fisheries and Oceanography in Yuzhno-Sakhalinsk, Russia, has studied pink salmon for decades.

"Pink salmon adapt better than other species to any environmental changes due to their short life history," Radchenko writes in an email. "Pink salmon's response is quicker and more suitable to changes." Their fixed two year life cycle -- other salmon have four to seven year cycles -- means they have faster generation times and deal more readily with environmental changes.

Pinks are like a colonizer species, says Scott Hinch, fisheries biologist at the University of British Columbia. They're like the alder trees that shoot up in a clear cut before anything else. Pink salmon don't have much of a freshwater residency, so they're less affected by habitat degradation in freshwater. They tend to spawn in larger rivers, not small streams, so their habitat requirements are different. They can migrate through fast moving water when they have to, and they can stand the heat better than other salmon species.

"They're truly unique in terms of their swimming performance and their thermal tolerance," Hinch says. "They definitely have much higher thermal tolerance, as adults anyway, than sockeye, and they're actually better swimmers than sockeye. Which probably accounts for why their numbers are growing and why they're expanding their distribution northward in the Fraser. So they are probably the fish of the future."

Kentaro Morita, a fisheries biologist at Hokkaido National Fisheries Research Institute in Japan echoes his colleagues when he says pink prefer warmer waters compared with other Pacific salmon. And in a study published online earlier this year, Morita looked at salmon and water temperature in a lab. Biologists have known that larger fish prefer cooler water, and larger fish are older fish. In the field, they see larger, older salmon in colder waters and smaller, younger salmon in warmer waters. Morita's lab experiments on salmon showed that, indeed, with increased size, came a preference for colder water.

"Small body size may be a benefit for pink salmon," Morita writes in an email. Size, however, doesn't explain everything. "Sockeye salmon prefer cold temperature compared with pink salmon, even with the same body size."

Over the past 50 years, coastal B.C. waters have warmed a full 1.5 degrees Celsius in the Strait of Georgia and less in other areas. Still, at the moment it's not so warm that pinks are the lone holdouts at a hot tub party while their less tolerant brethren run for the cool pool. Something else happens when seas warm moderately -- smaller species proliferate. In other words, a seafood buffet, particularly for pinks.

First to the food

Pinks are also some of the first salmon to enter the ocean -- they get to the table first and stuff their faces.

"They spawn in the lower parts of rivers, and after the juveniles emerge from the gravel they enter the ocean rather quickly," says Dick Beamish, a Department of Fisheries and Oceans biologist in Nanaimo. "We think that what's happening is that more food is available for them -- we can't say what particular type of food, but they're better matched with the food, and it's also possible that we're seeing earlier production of food in the ocean."

Pinks have something else going for them: weak homing talents compared with their older cousins. Because they're more likely to "get lost," maturing pink salmon redistribute themselves and their genes between spawning regions. Fish that show up in some other population's stream are called strays and they're crucial to strengthening, or even re-establishing, a salmon population. The most dramatic example of how influential stray salmon can occurred after Mount St. Helens erupted in May 1980. Any offspring that spawned in the Toutle River the previous fall died. Strays from that population would have been the only ones to leave a genetic legacy.

A few things complicate this rosy pink picture. One is hatchery fish -- five billion of them. Japanese, Russian, and Alaskan hatcheries release the most hatchery fish into the wilds of the North Pacific, predominantly pink and chum. Morita estimates that the contribution of hatchery fish to pink salmon catches in Japan averaged 40 per cent between 1971 and 2003. In Russia, the number is maybe 10 per cent. In Alaska, hatchery fish contribute over 40 per cent to the overall pink catch. Still, it's pretty clear that despite the hatcheries -- which can be a threat to wild salmon populations -- wild pink numbers are climbing.

Another complication is ocean chemistry. Dump tons of carbon into the atmosphere and things change, says Debby Ianson from the Institute of Ocean Sciences where she studies ocean chemistry on the BC coast.

"The ocean is absorbing more carbon and when the ocean absorbs more carbon it becomes more acidic," she says. "That is straight chemistry."

When the pH of the ocean goes down -- and it's going down -- fish suffer. And this is where you have to wonder if even pinks, with their slight advantage, can adapt: right now, ocean chemistry is changing at least 100 times quicker than it's changed during the 650,000 years prior to the industrial revolution. When the pH drops, organisms like pteropods can't pull crucial minerals out of the ocean to build their shells. A large part of the pink salmon diet is pteropods (a planktonic sea snail).

What about the Harrison sockeye? For the past five or six years Harrison sockeye have seen a population boom. Tomorrow we'll look at what makes them more resilient than other sockeye in ways that could help them better weather the coming changes in the ocean and climate.

Tomorrow: Why, if you're a little smolt, it's good to be in a hurry to get to the sea.