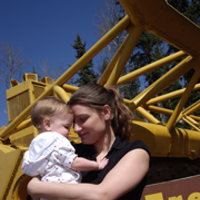 Joining the Jobless in Mackenzie

The Castlegar mayor continued, "The local manager of our Celgar Pulp Mill came in and asked to see if he could see me. I wasn't there, so he left a letter."

The letter stated that the city's largest taxpayer was refusing to pay its $2.8 million annual property tax bill. And what's more, Celgar was to sue the small West Kootenay city in B.C. Supreme Court over what the mill described as an "unreasonable tax rate" or "illegal" tax bylaw.

"There were no discussions. No warning. No sign. Until I got the letter," said Mayor Chernoff, noting that the letter left him with a shortfall equal to 40 per cent of the city budget.

"What do you do in situations like this?" he asked an audience of local government representatives at this week's convention of the Union of British Columbia Municipalities. "It isn't covered in those orientations we get as new officials."

Chernoff soon learned that Castlegar (pop. 7,200) was not the only small B.C. municipality to be sued by its major industry this summer. Campbell River, Kitimat, North Cowichan, Port Alberni and Powell River each received similar letters.

The lawsuits were nearly identical. All but one were brought by a local pulp mill. And in all but one instance, those mills continue to withhold 2009 property taxes from the communities where most of their employees reside.

Rulings in the first of these cases are expected this fall. But the midsummer mutinies launched by Catalyst Paper, West Fraser Timber and TimberWest have stirred anxiety among municipal officials across British Columbia, and that queasiness is roiling beneath the nerdy surface of this week's UBCM convention like the waves beneath the Canada Place pier.

"It seems very likely that whatever the court decides, this issue will wind up in the [provincial] government's lap," observed UBCM veteran Gerry Armstrong.

Representatives of the plaintiff pulp mills were conspicuously absent from a Tuesday afternoon panel on industrial taxation at which their lawsuits were debated. But Jock Finlayson, a vice president of the Business Council of British Columbia, argued the case for industrial property tax reduction.

"There is a real problem," Finlayson told the UBCM. "Not in every community, and not for every [large industrial] taxpayer, not by any stretch of the imagination. But certainly in perhaps 20 per cent of the communities in B.C., our members operating there do feel that they are bearing an unfair share of the property tax burden."

Finlayson said 35 B.C. municipalities had been found not only to have the highest industrial property tax rates in Canada, but in all of North America. He said some industrial producers were paying more than half the tab for the entire community.

"Relative to the local services that industry consumes, a lot of industrial taxpayers in B.C. are carrying a substantially higher share of the total tax burden in their communities," he said.

"Almost without exception," he continued, these large industrial producers of commodities such as pulp are selling into international markets. "They can't pass costs forward… These companies don't have the market power to pass those on to their customers."

Finlayson also urged the province to step in to the industrial property tax debate.

"We believe, and we have recommended this to the province, that there is a need for the government to intervene," he said. "We've been arguing this, however, for 10 years. We've been unsuccessful to date."

Finlayson suggested all levels of government consider these recent conflicts within the framework of a larger tax equity problem.

"I think in Canada we have a somewhat antiquated structure for dealing with local government finance," he said.

"The bottom line is that local governments collect only about nine per cent of all the revenues collected by all levels of government in this country… even though local governments arguably are delivering a lot of the most important services that we interface with as citizens."

"Property tax in the industrial class has a long and checkered history in British Columbia," consultant Gerry Armstrong told the UBCM audience. "This is a story of simmering discontent within a business community that occasionally finds a receptive ear in government."

Armstrong, who served in a number of provincial ministries before retiring, explained how the social contracts under which these large industrial producers operate have changed.

"The companies may have accepted the need for higher taxes in their start-up years, recognizing a corporate responsibility and self-interest in funding community infrastructure, which would allow them to attract and retain employees," he said.

"This priority has eroded," he continued. "Furthermore, in many cases, the present owners are not the same owners who joined the implicit social contract with their host communities during start-up."

Armstrong highlighted similarities among the six cases, which appear to be part of an industry-coordinated campaign.

"The companies central argument is rooted in the perception of unfairness between the tax they pay that the taxes paid by other taxpayers in their communities," he said.

"Each petition asks the court to agree that the bylaw setting the tax rate is illegal, and the bylaw is unreasonable." Armstrong added, "The affidavits also appear to be designed to advance the public relations justification for the challenge, along with the essential legal arguments."

Five of the cases were heard earlier this month, and Armstrong said a decision or decisions could come any day.

"In a certain sense, the outcome is less important than the fact that these cases have been launched," he added.

"A victory for the companies would establish a precedent that is open to other class four [large industrial] taxpayers, and likely other non-residential classes, based upon similar arguments. Virtually every community would be at some degree of risk," Armstrong said.

"The communities that directly lose the case," he added, "would quickly appear on the [provincial] government's doorstep, seeking assistance in the form of funding or legal redress."

A victory for the municipalities would almost certainly trigger an appeal, he continued.

"They could continue to withhold payment of taxes in an act of brinksmanship, and would certainly appear on government's doorstep arguing… they have now exhausted all avenues provided for them within the present rules, and demand changes to those rules," he said.

Armstrong further suggested that the current government might prove receptive to that argument.

"From the business-minded perspective, government could with some justice believe that property tax issues may well be the final frontier in their continuing campaign to make British Columbia a tax-competitive jurisdiction," he said.

'Now we need some of that money back'

Though hit hard by the downturn in commodity prices, the pulp mills that brought these cases are far from antiquated producers stumbling toward closure. Mercer International describes its Castlegar mill as "one of the largest and most modern kraft pulp mills in North America."

Mayor Chernoff concluded his brief remarks to the UBCM on a philosophic note.

"It is the nature of these situations to be angry and to look for ways to vent. I think I may have done all of those things. But then we realized the mill is still a major source of employment, so despite everything, we have tried to keep channels open with them," he said.

Chernoff said industry, municipalities and the province need to work together to identify solutions.

"It would be easy to point to the rate of taxation the municipalities charge as the problem. Or to blame industry," he said.

"It is harder to ask and answer this question: What does the new model look like?" he said. "We have to be asking this, and so does the province."

"The other question to ask is this: How are we going to get through the transition from the old way of doing things to the new way?" he asked.

"I didn't create our city's reliance on the mill. I'm happy to diversify. But we need help to get there. The existing taxation model allowed our community to grow. It benefitted industry. It also allowed the province to gain a significant revenue stream from our region," he continued.

"Now," the Castlegar mayor concluded, "we need some of that money back."