What if we raised some money for charity by hosting an Olympic visitor in our own home? 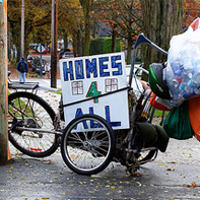 50 Ways to Help the Homeless

That modest idea, kicked around a breakfast table in East Vancouver six months ago, has become a full-fledged non-profit called Home for the Games -- with big ambitions.

The aim is to enlist the welcoming spirit of people throughout the Lower Mainland to help raise hundreds of thousands of dollars to house the homeless.

At a press conference held yesterday, the people involved with Home for the Games explained how they will use a web site to match homeowners wanting to rent out their homes during the Olympics with visitors looking to rent more affordable accommodation.

Some of the rent money stays with the host, but the rest – at least half -- will go to housing charities on the Downtown Eastside.

"The initiative really did come from a discussion at the table around not just the energy of the Olympics, but also the other issue that everyone is talking about in Vancouver, which is homelessness," said Home for the Games founder Charles Montgomery.

"We thought, what if we use the money from a home-stay and directed it to charities dealing with homelessness? Not only would we have a terrific Olympic experience with guests from around the world, but we'd be making a difference on a problem that is of concern to all of us."

Everyone the housemates talked to thought the idea was brilliant, and wanted to do it themselves. So Montgomery figured, why just invite our friends to join in? Why not invite the entire city?

The idea snowballed. In a press conference today in Montgomery's Commercial Drive home, at the very table where the original idea was sparked, he said early sponsorship from The Tyee, BCAA, Seven25 Design and Ryan Ilg Creative set the ball rolling.

And though the organization is completely independent from both the city and VANOC, both have offered their encouragement.

Vancouver Mayor Gregor Robertson offered this endorsement: "Home For The Games is a great example of the positive legacies we can create from the 2010 Winter Games. With the immense challenge our city faces with homelessness, I can't think of anything better than harnessing the excitement of the Olympics to help get people off the street and into homes."

Vancouver City Councillor Suzanne Anton also spoke in favour of the idea at a council meeting earlier this year. "Metro Vancouver homeowners are generous and want to help those without homes. Home For The Games lets homeowners have the enriching experience of hosting guests for the Olympics and the great pleasure of sharing the proceeds in a positive way to help homelessness," said Anton.

"I hope that it finds a lot of support," said Deputy Mayor Geoff Meggs.

"I think that as the games get closer and people realize they're coming no matter what, it's important for people to focus on what can be done for the city and its development."

Eligible homeowners and renters register their open room, suite, or house on the Home for the Games website, and set their own price at a minimum of $100 per room. "Of course, you can not kick out your tenants to host people during the games. We all know that," emphasized Montgomery.

HFG volunteers then vet the homes to ensure they are safe and accommodating for the guests, and encourage the owners to set a fair price. Once a visitor decides to rent the room, HFG collects a deposit from the guest of 50 per cent which will later become tax-deductible donation from the host to one of the two receiving organizations. The rest of the bill is settled with the host once the guest arrives.

The money will be donated to community-based organizations Streetohome and Covenant House to help fund specific projects targeting homelessness in Vancouver.

Jae Kim, president of the Streetohome foundation says that when Montgomery first approached her with the idea of Home for the Games earlier this year, it was exactly what she had been looking for.

The Streetohome foundation had recently conducted a survey implemented by Angus Reid that revealed two illuminating things about Vancouver's citizens. The first was that Vancouverites feel a moral obligation to do something about the homelessness problem in the city. The second was that most had no idea how they could possibly do that. Home for the Games, Kim says, will provide citizens with that way to help.

"There's something poetic about opening your home and having the funds used to facilitate addressing people in our city who don't have homes."

It's a sentiment echoed through the entire mandate of Home for the Games.

"People in this city, we're not heartless," says Montgomery. "We're here to help people make a difference. It really doesn't matter how people engage, but the act of engagement, welcoming visitors, and also finding a way to help end homelessness in Vancouver, it's good for all of us."

Tyee a sponsor for the project

When Montgomery was in the early stages of developing support for Home for the Games, he found an enthusiastic backer in The Tyee, which is a media sponsor for the project. The Tyee has made homelessness a major focus of its reporting, including its relation to the Olympics, and finding solutions.

Montgomery said Tyee support was instrumental in helping the project gain traction with other members of the community.

"This is a perfect fit for The Tyee and we're proud to have helped give it a start," said editor David Beers. "Home for the Games offers a real, authentic way to bring about the cultural exchange that is part of the appeal of the Olympics. Whether you are critical of the games or a big fan, they are coming in six months and all those visitors and global attention provide a powerful opportunity to make a positive impact on homelessness. Home for the Games has every chance of being a 'good news' story and we'll be keeping our Tyee community up to date on its progress as it unfolds."

The purpose, according to Home for the Games acting project manager Tracy Axelsson, is to create a win-win-win scenario in the city.

Hosts and homeowners will benefit from a positive Olympic experience with guests from around the world, as well as making a moderate profit.

"Our goal is to raise $750,000 through rental fees and donations," said Montgomery. "We've already had great response from hosts, volunteers, donors and sponsors, and welcome additional support from those who share our vision."