The news that TV prices have dropped low enough to force some makers out of the market will come as a surprise to no one who caught the sales flyers. 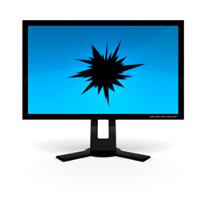 Economic analysts explain it by pointing to everything from the strong yen frustrating Japanese manufacturers like Sony and Panasonic, to the recession, to increasingly savvy consumers realizing that if they just wait six months the price for the latest gizmo will drop. Throw in the boom in tablets, and the old-fashioned TV has gone from being the electronic fireplace to just another white elephant.

But I suspect there's another reason for the 50 per cent drop in boob-tube prices: television sucks. So why buy a device designed specifically to deliver shows we don't want when there are already 2.8 TVs hanging around the average household?

The day I quit

I stopped watching TV about six years ago, after a stint as a television critic put me off the whole wretched medium. It was all over for me the day a release announcing the latest cycle of Survivor arrived and I burst into tears at the thought of being tortured through another celebration of psychopaths and stupidity.

Not long thereafter I called my TV content provider who, while absurdly overpriced and indifferent to my tastes, had always been reliable. When they asked why I was leaving I drew on the classic break-up speech and assured them it wasn't them, it was me.

"Buffy the Vampire Slayer ended and that's all I want to watch," I confessed. "So, I don't need it anymore."

That led to one of those convoluted conversations that can only happen with cogs in a bureaucratic wheel. The very pleasant woman seemed to think I was punishing them for something and kept asking me to explain myself. I kept repeating that I was canceling my cable because, essentially, there were 60 channels and nothing on. She couldn't wrap her mind around this. (What was she: an America's Next Top Model fan?) Finally she took my point about there being nothing worth my time and exploded in frustration: "But THAT is not our fault!"

I agreed it was clearly my fault for not wanting what they deliver (very effectively). But as I said to my editor when I gave up the TV gig: You can't pay me enough to watch this crap; why would I pay for the privilege?

I had other issues with multi-channel entertainment packages but the clincher was that I'd been watching The Wire on DVD and found that it was by far the best way to see sophisticated shows that are structured like novels, with intricate plots and character development. I didn't want an episode weekly; I wanted to view the series when I had time. And view only about five TV shows a year in full, so I wait for the reviews before I commit.

The way television is delivered didn't reflect how I lived, what I wanted to watch, or what the technology can do for us. Worse, it forces us to fund content we find objectionable. So I was out. And it turns out I'm not alone.

Broadcasters have seen this coming ever since we figured out how to program our VCRs, sometime in the 1980s, and learned that TV-on-demand is divine. Generally, only children and the infirm park themselves in front of the box and indiscriminately consume whatever the cable gods deem suitable. By 2008, the median age of live-TV watchers in the U.S. was 50, while the median age of Americans was 38. Hit shows like Dancing with the Stars are favoured by people 60ish. I'm guessing they're the ones who never mastered their VCRs, which set them on a death spiral of technophobia that now leaves them to watch whatever accommodates their bedtime. (And let that be a lesson to you about the hazards of not embracing technology.)

The rest of us have been skipping the ads for about 30 years, which has led to astoundingly inept product placement within TV shows, and more tuning-out on series like CBC's current swillfest, Being Erica. There the hilariously bad embedded ads for cars and tea sound just like a 1970s detergent commercial. Incidentally, does anyone really need to ask why no one is watching CBC drama when they deliver writing and acting this amateur? Have they not heard of Mad Men?

Still it came as something of a shock to learn that almost no one I know watched old-fashioned TV that requires you to buy multiple tiers of bad programming in order to get access to the content you really want. They've replaced it with a host of a la carte services at about half the price. Netflix is the big favourite for $8 a month, and it even comes on mobile apps. Although it features older TV series, its selection of documentaries hooked many a reporter. Some friends value HD screens for watching current shows like the Brit costume drama Downton Abbey -- the clothes, jewellery, and Edwardian décor demand a crisp picture, and for $20 Amazon already sells the Season 2 U.K. DVD of the seven episode series that is about to air on PBS. Revenge, a retro evening soap about the rich-and-evil, also has fab sets and clothes, and comes for a mere $35 via iTunes for a HD season's pass of more than 20 hour-long episodes.

Even moms who once admitted with a guilty shrug that they plunked their toddlers in front of Treehouse TV told me they were now slapping Dora the Explorer on an iPad. Not only was it television on demand for picky children, it was on-board the stroller.

The last to unplug

Sports fans were the last devotees of entertainment packages, because they have that compulsion to watch things like cricket in real time, all over the Commonwealth. Or so I thought. My friend "Kerry" a hockey slave confesses that last year she gave up her cable package featuring sports channels because her beloved Canucks can be followed online or with a mobile app -- she catches games on her iPad, or in a pinch, her phone. Her home TV is just a screen on which she watches films and TV series on DVD, at her convenience.

Oh, and Kerry won't let me use her real name. Killing her cable is a dirty little secret because she does PR in television and she doesn't want it to get around that even she can't be bothered to watch the drivel they air.

"For me it's all about quality programming, and the availability of the good stuff matching up with the time I have," Kerry says, explaining why she abandoned old TV. "Equally important is skipping those toxic commercials that sell a warped way of life."

Their habits reflect what studies began to show as early as 2008 in the U.S. -- that the well-educated and employed were migrating online and replacing TV with Internet services. Particularly women. Probably because they're time-starved and not looking to fill their off-hours with pap.

Meanwhile, the online choices are multiplying. In the continuing campaign to find a way to coax cash out of YouTube, Google is looking into creating a channel for professional video, which would give artists direct access to audiences, and kill the middleman -- the suits who made the bad creative decisions that drove audiences away from TV in the first place.

Watching television was almost obligatory at one time because it drove water cooler chat; turning your nose up at the medium made you sound like snob. Now social media deliver chitchat fodder with an endless supply of those dreaded cat videos and all their variations: chattering babies, pepper-spraying cops, and inexplicable YouTube Sensations. Yes, that's a job title now. Once we all knew about the Soup Nazi; now there's no escaping Rebecca Black.

Meanwhile people discuss television series the way they once talked about literature and ask the equivalent of what's on your nightstand? Knowing about a great show your friends aren't watching yet has a kind of social cachet, much the way discovering a great new restaurant did 20 years ago during the rise of foodie-dom.

Generally, I think that's an improvement over feeling forced to watch Friends. But it won't do a thing to move that glut of TV sets.