Canada has an Internet "openness and access deficit." That was the starting point for OpenMedia.ca's "Casting an Open Net" report published earlier this year. The report noted three disturbing practices employed by several of Canada's dominant Internet Service Providers (ISPs): 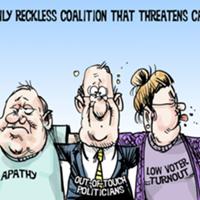 Vote for the Engine of Social Change

1. Many Canadian ISPs (Bell, Rogers and Shaw) selectively limit access to certain online services in a practice known as "throttling," or the slowing down of Internet traffic. This renders certain services almost unusable, as expressed in the recent complaint against Rogers, submitted to the CRTC, regarding the ISP's throttling of World of Warcraft, a popular online game.

3. Big ISPs have been imposing usage-based billing (UBB) -- setting low usage caps and charging high per-use prices, inconsistent with global standards. This discriminates against bandwidth-heavy activities such as online video consumption and distribution, online gaming and web development. When ISPs apply these costs, but exempt their own media services (video-on-demand or IPTV) from the caps, they effectively stack the cards in their favour in a way that compromises the open and democratic nature of the Internet.

Taken together, these activities stifle innovation, free expression and new opportunities for participatory democracy; however, with the exponential growth of the pro-Internet community this year, most visible with the StopTheMeter.ca campaign, the big ISPs appear to be losing their grip on Canada's Internet. This year, every major political party has come out against the punitive Internet metering schemes (usage-based billing) that ISPs are trying to impose on Canadians. What's more, commissioners at the CRTC, the regulator of the telecommunications industry, seem to have finally figured out that they need to do their part to stop Big Telecom price gouging and to ensure Canadians have affordable access to the Internet.

Alas, the big phone and cable companies are not giving up without a fight -- in fact, they're doubling down on greed. These companies are raising prices across the board while they still can, and are trying to cozy up to policymakers: this summer, Bell appointed former industry minister Jim Prentice as a board member, and Telus did the same with former Conservative MP Stockwell Day.

Big Telecom's appointment of these key cabinet ministers reeks of patronage and backroom deals. The tide has turned against Big Telecom, and now they appear to be willing to cheat to hold onto their control of the telecom market and your wallet.

For the time being, Big Telecom continues to outspend Canadians by investing a chunk of their profits (secured in large part by gouging Canadians) in maintaining their dominance. In essence, big ISPs are gouging Internet users and using our hard-earned money to pay for an army of lawyers, lobbyists and expensive board appointments.

To unravel this system of telecom market control, we'll need to expand upon the pro-Internet community's success in pushing back against Big Telecom earlier this year. Our success resulted from the collaboration of a broad network of people and organizations who decided 'enough is enough' when Big Telecom decided to gouge us even further with new usage fees. It's time to scale up our efforts. Get involved here.