Barrick Gold is a giant in the world of Canadian mining corporations, and its founder and chair, Peter Munk, has revelled in media attention for his philanthropy. For example, on April 13, the Globe and Mail reported a $35 million contribution from the gold magnate (with a matching $25 million from the Ontario government) for a new Munk School of Global Affairs at the University of Toronto, "to join an elite cadre of international academic institutions such as the Fletcher School of Law and Diplomacy, the London School of Economics and Johns Hopkins University's School of Advanced International Studies in Washington." 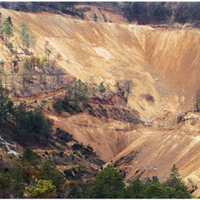 Turning Down a Gold Mine

How could one look such a gift horse in the mouth, or quarrel with Peter Munk's professed beliefs? According to him, "Canada has a unique opportunity to step into the shoes that America has vacated, and I think that requires an elite group of highly educated, globalized Canadians who can be the spokespersons of every aspect of globalization. I don't mean just trade, or democracy, or multiculturalism. . . but all the things Canada stands for, from health care down to the fundamental rejection of any kind of corruption."

Perhaps the portrait is a little too perfect. How many readers of The Tyee or Canadians outside Quebec are aware that the same Barrick Corp., on whose board sit such eminences as Brian Mulroney, has been engaged in using SLAPPs -- Strategic Lawsuits against Public Participation -- against two small presses, one in Quebec, one based in Vancouver, that have published or announced an intention to publish books that this august corporation finds offensive to its image? It took a March 25 op-ed article in Le Devoir, the independent Montreal daily (not beholden to the powerful media interests that control so many of Canada's leading newspapers) to alert me to the situation.

'What kind of culture?'

Talonbooks of Vancouver had listed a book, edited by Alain Deneault, entitled Imperial Canada Inc.: Legal Haven of Choice for the World's Mining Industries, in its spring catalogue. In its catalogue, the book is described as follows:

"Imperial Canada Inc. sets out to ask a simple question: why is Canada home to more than 70 per cent of the world's mining companies? The authors, all respected scholars in their fields, meticulously research four factors that contribute to answering this question: Quebec's and Ontario's mining codes; the history of the Toronto Stock Exchange; Canada's involvement with Caribbean havens; and, finally, Canada's official role of promoting itself to international institutions governing the world's mining sector."

Sounds interesting enough, all the more since Canada's mining sector has not been subject to the kind of critical investigation that its role in the Canadian economy or in the international arena would richly justify. But anyone seeking to peruse its pages will be hard-pressed to find a copy for a simple reason. On Feb. 12, as the Winter Olympics were getting underway, the publisher of this prospective book, the authors, and the translators received a fax marked "WITH PREJUDICE" from the legal firm representing Barrick Gold. The fax, under threat of legal action, "demanded that you provide the undersigned with a copy of any portion of the manuscript or text of Imperial Canada Inc. that makes direct or indirect reference to Barrick, Sutton Resources Ltd., or to any of their past or present subsidiaries, affiliates, directors or officers no later than by 5:00 p.m. on February 19, 2010."

As Karl Siegler, publisher of Talonbooks, noted in a circular letter that he wrote shortly after the fax arrived: "What kind of culture, what kind of socio-economic reality, what kind of community have we come to live in, where a corporation is allowed to appropriate the full weight of our country's legal apparatus to threaten the authors, translators and prospective publisher of a book (Imperial Canada Inc.), with "proceedings against Talon Books, as well as against anyone else that plays a role in the publication, dissemination or promotion of this book" for "substantial damages as well as injunctive and other relief," unless the authors, translators and prospective publisher accede to the corporation's lawyers' demand to have delivered to them the manuscript-in-progress of that book, by a deadline they have set three months before that book has been scheduled for public release?"

However, the threatened law suit had its effect, because Talonbooks, a small Vancouver press without the deep pockets of a multinational corporation like Barrick, found itself forced to cancel publication of the book. Not because the book in question was anything other than a carefully documented manuscript casting a critical eye on an important area of Canadian public policy -- and not on Barrick in particular. But simply because Talonbooks could not sustain the long, and potentially ruinous legal battle, that may have ensued.

Barrick is not new to the game of threatening legal action against small presses. In 2008, it initiated legal action against a small Quebec press called Ecosociété that had published a book entitled Noir Canada — Pillage, corruption et criminalité en Afrique (Black Canada – Pillage, Corruption & Criminality in Africa). This book questioned the operations of Barrick and a number of other Canadian mining companies in countries like the Congo and Tanzania and led to a multi-million dollar suit against the press. The case will be heard by a Quebec court in 2011. For the moment, however, the book remains in print, though any English-language translation by a Canadian publisher would face legal action in Toronto.

Twelve thousand people in Quebec signed a petition against Barrick's attempt to intimidate Ecosociété. The March 25 op-ed article in Le Devoir, signed by a dozen of Quebec's leading academics, spoke of censorship before the fact in the Talonbooks case and of authors being denied the right to publish the result of their research. What does this say, they ask, about the principles of liberal democracy that we supposedly cherish in this country? Indeed.

Something is rotten in the country we call Canada. We may be beginning to suffer from the same vice that the great Mexican poet, Octavio Paz, once noted with respect to the United States, namely the attempt to combine democracy with plutocracy. Great wealth corrupts and the power of a corporation like Barrick, as exemplified in the Talonbooks and Ecosociété cases, is a significant threat to our rights and freedoms, above all to freedom of expression.

How ironic, therefore, that the University of Toronto, a haven of academic freedom, should bask in the gifts of Peter Munk. Instead of endlessly exposing abuses of human rights in China and elsewhere, perhaps the denizens of the Munk School of Global Affairs should turn their attention to dangers lurking closer to home.