Today, for the first time on home turf, a team of 25 will fight for Canada's pride and athletic reputation. The battlefield before them is Thunderbird Stadium, on the University of British Columbia campus, and their weapon of choice, the Frisbee. 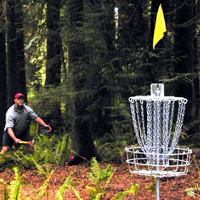 Disc Golfing with the Beetles

That's right, the Frisbee -- that unassuming flying disc beloved by man and dog alike. But the toy has grown up quite a bit since its days as a pie pan tossed back-and-forth between bored college kids.

Now, the game formerly known as "Frisbee" has rebranded itself. No longer does it go by that generic (yet trademarked) name. Re-baptized simply as "ultimate," disc-tossing has become an aggressively competitive team sport.

In 2012, Major League Ultimate was launched, becoming the sport's second professional league. Vancouver landed the only Canadian team, the Nighthawks, and tonight they play their first hometown game against the San Francisco Dogfish, the top team so far in the division.

This match follows an opening season loss against their neighbour and rival, the Seattle Rainmakers. But earlier this week, as the Nighthawks held their biweekly practice, spirits were dampened by neither rain nor the pressure of the upcoming game.

The Saturday match would not just be a win-lose situation -- though consensus at practice was that a win was definitely in order. For players like Marc "Dread Pirate" Roberts, the game would be a greater opportunity to show that "these guys are legitimate athletes, not just a couple of hippies at the beach throwing around a Frisbee with a dog."

Most of the guys on the all-male Nighthawks team have competed for Canada before. Vancouver serves as home-base for the amateur club team Furious George, known for its mascot, a grimacing cartoon monkey, and its three gold medals at the World Flying Disc Federation (WFDF) World Ultimate Championships.

Local players have also gone on to represent the country in other international tournaments. The WFDF currently lists Canada as the top national team.

But the Major League hopes to elevate ultimate to greater notoriety. The game will have a faster pace than before, with a larger field to zip the Frisbee around. One of the biggest changes, though, is the addition of referees.

Ultimate, true to its bad-ass name, is generally played without oversight. Rather than descending into pure anarchy, however, having no refs actually democratizes the sport, according to defensive player Charles "Bobo" Eyrich.

The seven players on each team all bear the responsibility of acknowledging their own fouls. It's like having 14 referees already on the field, says Eyrich. He credits this culture of sportsmanship with drawing him away from other sports like soccer.

But the Major League referees, dressed in bright orange and black, have "allowed the plays to flow" without any impediment to the regular "physicality" involved in ultimate, says Eyrich. And physicality abounds -- players come off the field with a variety of cuts and bruises, and Eyrich himself is currently sidelined with a knee injury.

The transition to the Major League has also given the players the unique opportunity to be paid for their hours of running, jumping and throwing. The financial windfall? A full $25 per game, plus expenses incurred.

It's hardly the salary of a David Beckham or even a Roberto Luongo. But it's a start for a sport climbing in popularity, though head coach Andrew Lugsdin certainly isn't encouraging his players to quit their day jobs.

"Ultimate is a passion for them. They want to spend as much time as possible working on their craft, but yeah, they need another job to pay the bills for sure," he says.

Lugsdin, a titan within the Vancouver ultimate community, admits the sport is "a bit of a weird thing." To score, one team has to lob the disc down the field, passing from one person to the other, until the Frisbee reaches the end zone. The opposing team can intercept the disc, or the offensive team can forfeit the Frisbee if a player holds onto it for too long without throwing.

But at age 19, Lugsdin "very quickly fell totally in love with the sport." The whirlwind romance lasted for the next 20 years.

The siren song of ultimate has also attracted a diverse group of devotees. The Nighthawks players moonlight as graduate students, beer representatives, school principals and residential painters. Their ages span from early 20s to late 30s.

Together, with the larger ultimate community, the players have formed their own subculture, complete with lingo. Passing backwards is called a "dump." An over-head throw is known as "the hammer." Saving the Frisbee from drifting out of bounds will earn you a play known as "the greatest," and the term for a short, high pass is "scoober."

The Nighthawks, they specialize in "hucking" -- a long throw that floats the Frisbee perilously close to the end zone. Additionally, some of the veteran players have been involved in inventing brand-new plays.

For example, ultimate players used to arrange themselves in a "vertical stack" along the length of the field. Lining up, one by one, they would pass the Frisbee to the person in front of them, until the disc entered the end zone. Vancouver's ultimate players credit themselves with pioneering the "horizontal stack," where two rows of players gradually work their way up the field.

"We definitely have a unique brand of ultimate. It's one that's respected and feared," says Jonathan Hayduk, a "handler" in the Nighthawks' offensive line. "In the end, you see a lot of teams mimic our style."

In the past, Hayduk traveled with other Nighthawks players as part of the Furious George team. A tournament in Colombia left Hayduk stunned: plays and tactics that his team "designed" were being used by other teams from Colombia and the Dominican Republic.

"It's like, 'Oh, that's our play, how did this get down here?'" he says. "It's remarkable to see the spread of ultimate throughout the world."

Vancouver's vibrant ultimate scene certainly struck Mauro Ortiz, nicknamed the "Venezuelan Vanquisher." His first visit to the city was in 1997, when his Venezuelan team flew up for a week-long ultimate tournament. Not only was the city "beautiful," with its ring of snow-capped mountains, but there were ultimate games "pretty much every day of the week," says Ortiz.

The following year, Ortiz met more Vancouverites at the WFDF World Championship, where Canada dominated the competition. After that, the decision for Ortiz was easy: he was moving to Vancouver.

In 1999, he immigrated, hoping to merely train with the Furious George team. He ended up instead as one of their star players. Now, he serves as a captain on the Nighthawks. And like a handful of other players, Ortiz is practically married to the sport. His wife, Katie Wilson, played for the women's championship ultimate team, "Prime." Their kids know when "papa" is going to practice.

During practice, while players leap and pirouette to grab the highest throws, children gather at the fence surrounding the field. A girl with ringlets giggles; she finds the player "in the black shorts" cute. The head coach himself, Lugsdin, is followed by an entourage of three tykes, his sons. One, clearly inspired by the practicing players, picks up a stack of Frisbees and throws them all at once. They land a few feet away. Another son emits a drawn-out moan, "I want to go hoooome."

Even the players who don't have family among the ultimate community have created a patchwork family from their colleagues. "Dread Pirate" Roberts was coached by Kirk "Savvy" Savage back in his high school days. Now, teacher and student work out alongside each other at the Nighthawks practice.

And even when defensive player "Bobo" Eyrich goes home at night, he cannot avoid the Nighthawks. He lives with three other players.

"Especially after games and after tournaments, we'll always talk about [ultimate]. Everyone has their vanity moments, talking about their highlights, and everyone else will bring them back down with their lowlights of the weekend," he says, laughing.

While the Nighthawks consider each other family, tempers boil over in the haste of the match. The players have bonked each other on the head before -- purposefully and hard -- adding to the collage of bruises and injuries they all carry. Yet the pressure of being the only Major League team also binds them together. National pride, says Eyrich, overcomes the rivalry.

"When you put on that Maple Leaf, there is literally no other feeling like it. You literally are among 20 some guys, and you are the best in your country," he says. "There's a lot of pressure in being part of team Canada, and being the only Canadian team in this division. But that's what we live for."