On a fine May morning in 1916, a nervous pitcher walked to the mound for the struggling Oakland Oaks. Days earlier, Jimmy Claxton had impressed Oaks manager Rowdy Elliott at a try-out before signing a contract with the ball club. 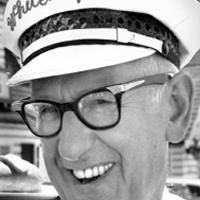 Claxton was a beanpole figure with long arms and strong hands calloused from labours as a stevedore and coal miner. He had a long face with a hangdog expression. In photographs, he seems to carry a great sadness.

The left-hander had been pitching for the Oak Leafs (formerly the Lynne Stanley Giants), an all-black squad that competed against white semi-professional teams from around the San Francisco Bay area. Local newspapers hailed Claxton's control as a pitcher.

In an age of segregation and discrimination, of separate and unequal, of Jim Crow and "Whites Only," a black ballplayer was limited to a career in the Negro Leagues, or as a barnstormer, or in playing semi-pro ball for a job and a fistful of greenbacks stuffed into a pocket after a game.

Claxton's manager on the black Oak Leafs, a fellow named H.F. Hastings, claimed to be an American Indian from Oklahoma. He presented his 23-year-old lefty pitcher to the Oaks as a fellow member of his tribe. In the twisted racial rules of the day, a full-blooded Indian was worthy to play with white men whereas a black man was not.

The story was dutifully repeated by sports writers. "Oakland signed an Indian pitcher named Klaxton from the wilds of Minnesein," reported the Sporting News -- the "Bible of Baseball" managing to misspell the player's name while citing a nonexistent place. The Oakland Tribune simply referred to the pitcher as an "Indian southpaw."

On May 28, 1916, Claxton made his debut for the Oaks in the first game of a morning-afternoon doubleheader. He was uncharacteristically wild, even committing an error in the field.

Perhaps he suffered from ordinary jitters. Or perhaps the secret he harboured distracted him from the task at hand.

The truth of his ancestry could be found on a sheet of paper in the British Columbia office in which his parents' marriage certificate was kept. Rev. J.W. Flinton, rector of St. Matthew's in the Vancouver Island mining town of Wellington, had filled in the details in ink in a flowing, handwritten script.

The minister also added a note: "The bridegroom is a coloured man, the bride a white woman."

Claxton's brief foray across baseball's odious colour line would be the last for a black player until the great Jackie Robinson joined the Montreal Royals for the 1946 season. Robinson's subsequent ascension to the Brooklyn Dodgers of the National League the next season is the subject of the Hollywood biopic 42, which opened this weekend.

Claxton's story is little known outside of a coterie of baseball historians and fellow obsessives. James A. Riley, the author of the landmark reference work "Biographical Encyclopedia of the Negro Major Leagues," figures Claxton would have been a major leaguer were it not for the colour barrier.

After Claxton returned to playing black baseball, newspapers praised the pitcher as someone who "would be in organized baseball but for his color" (Oakland Tribune) and as "the foremost negro ballplayer in America" (San Jose Evening News).

James Edgar Claxton was born on Dec. 14, 1892, in Wellington, Robert Dunsmuir's coal-mining town on the Esquimalt and Nanaimo Railway line. (The old town site is now part of Nanaimo.) His father, William Claxton was a coal miner of black and aboriginal ancestry who had been born in Virginia. His mother, Emma Richards, was of Irish and English ancestry.

The family moved to Tacoma, south of Seattle, three months after Jimmy was born, though they later returned to Vancouver Island where a sister was born four years later.

The absurdities of the racial divisions of the time can be found in the American census. Jimmy and his father are alternately listed as mulatto and black; his sister, who was raised by her mother's family, is listed as white.

Claxton's complexion was light enough for him to pass, however briefly, across the colour line.

"When he bares back his shirt," a reporter wrote in 1964, "his skin is as white as that of a Nordic. Perhaps from his Indian blood his hair is straight and jet black -- or was before grey hairs and a high forehead came with the years."

He began his baseball career at age 13 as a catcher for the town team in Roslyn, a Washington mining city. While a left-handed catcher is a rarity, a left-handed pitcher able to throw bullets is a valuable commodity, so he swapped places on the battery, beginning an itinerant career that would see him pitch in all but two states (Maine and, somehow, Texas).

He pitched for such semi-professional teams as the Roslyn Yippers in Washington, the Mason City Black Bats in Iowa and the Sellwood Dingbats and Portland Colored Giants in Oregon. He barnstormed with the Chicago Union Giants and the Cuban Stars, where one of his teammates was Luis (Lefty) Tiant Sr., whose namesake son would go on to become a star hurler in the majors. For a time, Claxton pitched for the traveling Nebraska Indians under the nom de guerre Chief Two Horse. (In a game in Winnipeg in 1932, he struck out 14 in an exhibition against a city all-star team. The Indians carried on their roster a juggler and a pint-sized pitcher known as Kewpie Taylor. They sometimes played while wearing feathered headdresses.)

Claxton spent several seasons with the Shasta Limiteds, a Bay Area team composed of railway porters who were also known for clowning and performing baseball pantomimes. He struck out 23 batters in one 11-inning game. In 1924, while working as a card-carrying member of the longshoremen's union, Claxton broke the colour line in the Tacoma industrial league.

Over time, he developed an impressive, if somewhat histrionic, pitching motion. He started by facing second base, away from home plate. After two or three windmills with his pitching arm, he'd pivot on his left leg, his right foot lifted high overhead, to hurl the ball to the plate.

It is possible he learned the exaggerated windup from Tiant, whose son also displayed a similar flourish on the mound. He got to meet Tiant Jr. in 1964, when the Cuban-born pitcher was playing for the Portland Beavers. 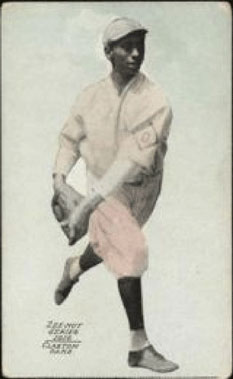 Claxton died in 1970 and was buried at Oakwood Hill Cemetery in Tacoma. No notice was paid in the baseball world.

He got to pitch briefly in two games for the Oaks on the same day before being released after about six days on the roster.

Claxton figured Oaks management had been told he was black. The club also tried to renege on his salary.

"They tried to get out of paying me, but I had my contract and the notice of release," he said. "They had to come through with the money."

As it turned out, Jimmy Claxton slipped across the colour line in an auspicious week. While the Oaks were flailing and the day in which he pitched included an incident where the umpire was chased across the diamond by enraged fans, Claxton's time on the roster coincided with a visit to the ballpark by a lens-man hired by the Collins-McCarthy Candy Co. of San Francisco. He snapped an image of Claxton in his pitching follow-through, stepping forward on his right leg while his empty left hand is thrown across the body.

This likeness later appeared on a Zeenut baseball card. It is now one of the most coveted pieces of cardboard in the hobby, as it depicts the first black player to appear on an American baseball card.

Ignored in his lifetime, the British Columbia-born player is now remembered for defying convention.

After baseball closed the door on Claxton, another 30 years would pass before Jackie Robinson opened it for himself.