For lifelong Canucks fans, the classic moment of the playoffs so far in 2011 wasn't Alex Burrow's magical overtime catch-and-release shot to eliminate the Hawks, any of the dozens of superheroic plays by Ryan Kesler, awe-inspiring saves by Roberto Luongo, or dazzling defensive maneuvers by Kevin Bieksa -- it was the fluky puck flip over the net that future Norris Trophy contender Alex Edler elbowed past current Vezina nominee Roberto Luongo to tie Game 5 for the Nashville Predators. 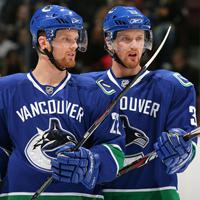 Canucks fans don't live for moments like these, but we expect them.

During the final round of the Stanley Cup run in 1994, I was interviewing an accountant for a business story the morning after Game 6 when the Canucks won a nail-biter, forcing a seventh game in the final round for only the 10th time in NHL history. The accountant turned to a colleague -- another accountant -- and asked if he'd watched the game last night. "Absolutely," said Accountant Number Two.

Then my interview subject, Accountant Number One, relayed with voice atremble, "The game was so exciting in the last few minutes... I HAD TO TURN IT OFF!"

I was desperately trying to wrap my mind around the idea that anyone could turn off that game when Accountant Number Two beamed at his colleague before practically shouting, "ME TOO!"

And the pair who had missed the end of the most important win in Canucks history appeared ready to high five each other.

This is part of the reason the Canucks bandwagon is more like a trampoline and -- like Rogers Arena -- should include a special section for people who leave in the last few minutes of the game no matter what the score is, because Canucks fandom is not for the faint of heart.

The most devout Obama birthers, 9-11 truthers and climate-change deniers are nowhere near as set on their theories as Canucks fans who know with a certainty stronger than science or religion that our team doesn't just have to beat the other guys on the ice, but the referees, the goal judges, the obnoxious Maple Leaf lovers at Hockey Night in Canada, the America-firsters at NHL head office and whatever hockey gods we insulted by creating the first artificial ice for hockey players at Denman Arena in 1911. The home team, the Vancouver Millionaires, won the city's first and only Cup in 1915, just under a century ago. Since then we've had to settle for Stanley's park, no matter how many millionaires have played for our team.

A future lost on a coin toss

In his book, Fever Pitch, where he shares the joys and horrors of being a lifelong football fan (this is the real football, the kind played with the round ball you kick), Nick Hornby wrote that, "the natural state of the football fan is bitter disappointment, no matter what the score."

For 40 years, the natural state of a Canucks fan is wondering what will go wrong next.

Canucks fans live in a perpetual state of waiting for the next skate to drop. We watch our team the way audiences watch classic horror movies, hoping the hero will somehow make it through all the death traps alive. We are always braced for the possibility that any play, no matter how harmless and insignificant will result in a puck bouncing off a player and past Luongo, send Sami Salo back to his special reserved playoff hospital room, or accidentally blind face-off magician Manny Malholtra -- possibly all in the same 10 second sequence. And we brace for the possibility that any trade could turn into another Cam Neely for Barry Pederson deal.

We know that Luongo is one of the best goalies in the game, we really do, and we know that almost every team in the NHL would trade their goalie for ours faster than a ref can blow a whistle on a puck a Canuck is digging for under an opposition goalie. But because Luongo is our goalie and these are the playoffs we expect Lu to let in the blooper from behind the net, or a buzzer beater that bounces off half the players on the ice like a pachinko ball before sliding just over the goal line. We're praying for the Sedins to score 12 goals a game -- and we know they can -- but we're expecting them to whiff on their checks and set up another 55-footer like the one Lidstrom slipped past poor Dan Cloutier.

This is the team that invented "towel power," which in every other arena on the planet has become a variation on flag waving, but in the city where it was born is a grandly ironic celebration of surrendering to a referee who appeared to believe that only the dastardly Canucks ever deserved penalties in a game against the angelic Black Hawks.

And speaking of those angelic Hawks...

After defeating the defending Stanley Cup champions and watching our Vezina-nominated goalie beat Nashville's Vezina nominated goalie while Ryan Kesler emerged as one of the best two-way players on the planet, the big question on every sports talk show in B.C. is, "what's wrong with the Canucks." I've always suspected that the day the Canucks finally hoist the greatest trophy in pro sports, the first question from the media will be about who the starting goalie will be next season.

But this season the Canucks named Henrik Sedin as captain and the team took on an almost Swedish calm as Alex Burrows and Ryan Kesler stopped chirping at refs and opponents and focused on the whereabouts of the puck, and Luongo shocked everyone by proving he could smile. The 2011 Canucks look and sound unflappable, no matter how much flapping fans and media are doing. After advancing to the final four for only the third time in franchise history, no one on the team is celebrating anything -- they're focusing on sipping champagne from Canada's most coveted silverware and leaving the rest of us to root for them to erase 40 years of wondering how different the world would have been if the wheel of fortune had given us Perrault, the ref had ruled "no goal" because Otto's foot made "a distinct kicking motion," and instead of hitting that post, Lafayette's puck slipped past Richter and sent us into overtime.

We've waited, worried and whined long enough. It's time for our Canucks to celebrate 40 years of futility by ending eight more games on the sunny side of the scoreboard and teaching us how to win.