Of all the Halloweens I’ve loved before, Halloween Kills ain’t one of ’em.

Halloween Kills is the 12th in the series that kicked off with John Carpenter’s original film, made on the super cheap with a gang of friends in 1978.

The original film is a strangely elegant affair, pared down to the raw essentials, so that it glides along, as if on greased wheels. The story is simple: a six-year-old psychopath named Michael Myers murders his sister on Halloween night and is packed off to the asylum for his troubles. Years later, he escapes and makes his way back to his hometown of Haddonfield to pick up where he left off on Halloween. You know the drill — stalk, stalk, stab, stab, kill, kill. The only person left standing is one indomitable teenage girl, Laurie Strode (played by Jamie Lee Curtis), who through ingenuity, courage and a dash of dumb luck survives.

Carpenter’s original film pioneered many of the horror tropes that we all know and love today — the killer’s POV shot, final girl and the murderous lunatic who simply won’t die. Over the years, they have grown thin with over-use, parody and reinvention, but something still sticks. Perhaps because, like most great stories, Halloween taps into something far deeper than its initial simple shape might indicate. The fact that Myers, the unstoppable bogeyman, is alternatively referred to as “the shape” should tell you something — he’s a faceless, mutable entity that moves inexorably, in endless pursuit. He can be put off for a time but never truly stopped. Kind of like death itself. That death is male and life is female in this story shouldn’t come as a terrible surprise. This shit is archetypal.

But after 11 sequels, all that foundational storytelling power has been leached away. Still, they keep coming, killer widgets from a wheezy old assembly line.

Given that Freddy Krueger’s Loki-like trickster hijinks eventually ran out of steam, while others like that little asshole Chucky seemed to keep going forever: what separates a successful horror sequel from a drecky cash grab?

As the original Halloween’s producer and co-writer Debra Hill put it in an interview: “The idea was you couldn't kill evil.... We went back to the old idea of Samhain, that Halloween was the night when all the souls are let out to wreak havoc on the living, then came up with the story about the most evil kid who ever lived.”

Halloween Kills picks up where the 2018 sequel ended. Laurie Strode, now a grandmother, has been stabbed in the gut by her old nemesis and is on her way to the hospital with her daughter and granddaughter. Having successfully trapped Myers in the basement of Strode’s house, the trio of women then set the entire thing on fire. Unfortunately for the fire crews scrambling to put out the blaze, no one told them about this plan. In their attempts to quench the flames, they set old Mikey free and then it’s off to the races once more.

Myers, butcher knife in hand and William Shatner mask in place, trudges across the screen as townspeople and teenage kids scatter like candy corn. Among these are some of the characters who survived the very first film — kids at the time of original carnage, and now grown old if not wise.

Faced with an unstoppable killer, people arm themselves with golf clubs, baseball bats and, in one case, a clothing iron. If you can’t stop Myers with bullets and fire, at least you can make sure his nifty jumpsuit is well-pressed.

The action is bogged down with unnecessary and slightly goofy subplots about Deputy Frank Hawkins and the original kill-a-thon, as well as a leaden bit wherein the townsfolk of Haddonfield go full MAGA mob and attack an innocent hospital patient. Leading, of course, to the eyeball-rolling line: “Have we become the monsters?”

As a number of critics have indicated, Halloween Kills functions as a bridge between the first Halloween, and the ultimate showdown between Laurie Strode and Michael Myers in Halloween Ends, slated to come out next year. Jamie Lee Curtis as Laurie Strode spends the bulk of the film lying around in a hospital bed, waxing philosophical about the nature of fear and human nature, which is about as boring as it sounds.

The pale pleasures of something harkening back to the original are thin gruel. The most loyal fans, starved for anything of that first seminal experience, may take what they can get. But you can never really go home again, even if you’re Michael Myers.

To make something work the way it once did is pretty much impossible. When the Guardian’s film critic Charles Bramesco wrote about the most recent iteration of Ghostbusters, he got pile-driven by fans for daring to suggest that this most recent film was a bit of grave robbing.

But Bramesco put a pin in it with the final sentence of his review.

“Here, we can find a damning summary of modern Hollywood’s default mode — a nostalgia object, drained of personality and fitted into a dully palatable mold, custom-made for a fandom that worships everything and respects nothing.”

You can’t sit through too many sequels, reboots or revisitations without seeing his point. Often these films, lacking the invention and street smarts of their predecessors, make up for it in extremity. Halloween Kills ratchets up the gore factor exponentially, but that too palls after a time. What are you left with?

More rarely, sequels work, sometimes even outdoing their origins. The sequel to the mid-'80s hit Candyman mixed humour, political commentary and brutal violence with intelligence into something that felt genuinely new.

Inevitably, sequels can also drive you back to the classics for another hit of that good old black magic. 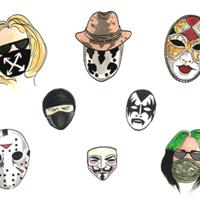 All the Cool Kids Wear Masks

Great horror films often mix pain and pleasure, creating something like a kind of comfort or even cosiness. It’s there in spades in the first chapter of Scream, where you spend a good portion of the film hanging out with the principal characters. The hunkered-down quality of the action, with folks sheltering together from an external threat, is strangely pleasant, offering ordinary homely moments cut with an edge of mortal terror. A curious cocktail of unease and hijinks.

With the recent announcement of yet another outing in the franchise I rewatched Scream and its sequels, remembering the idiosyncrasies of the series and revisiting old pals like Sid, Dewey and Gale Weathers, who retain a firm grip on life even as people all around them are being cut down like so much ripe grain.

That’s the other thing about horror sequels: they always hold out the hope that somehow things will be better this time around, that evil can be defeated, the bogeyman finally vanquished and like suckers, horror fans fall for it every time.

And perhaps that’s what keeps us coming back — even when the most frightening thing about horror sequels is often the death of originality.