Let’s get used to it, we’re all going to be wearing masks for a while — on transit, in schools and in other crowded places.

I actually feel pretty good about this.

I’ve always had a bit of mask fetish. It started early with the members of Kiss, the painted-up, larger-than-life rock gods. My sister and I became devotees of those Knights in Satan’s Service (that’s what the band’s name stood for, according to the Grade 4 rumour mill). But what’s a little satanic panic for the coolness of Kabuki-style makeup and crunchy guitar riffs?

The moment the band members washed their faces and went straight, I lost all interest.

Hockey goalies were next — lone masked warriors, weary with the weight of their team’s hopes and dreams. It wasn’t really the hockey per se, it was the hockey mask: blank and impenetrable, able to contain all of the romantic projections that a young fevered imagination could foist upon them.

I liked all of the old timers: Jacques Plante, Gerry Cheevers, Ken Dryden, as well as some kid in Grade 10 named Ben Chorzempa. The moment I watched him clomp onto the ice for Bantam hockey practice, I went mental. A towering romantic obsession is putting it mildly.

If you’re out there, Ben, I’m sorry I tortured you. Blame the mask.

V (of for Vendetta fame), Zorro, the Lone Ranger, Iron Man... all the cool kids wore them. Think of the people who have required masks over the centuries — outlaws, superheroes, highwaymen, ninjas and DJs. The Daft Punk duo was able to convey a world of pathos and empathy in their oversized robot heads. Masked folk were always up to interesting stuff, like robbing banks, swearing revenge, escaping the long arm of the law, dropping beats and generally just being badass.

The moment a masked figure showed their human face, they generally lost all allure: think Darth Vader, Kylo Ren and more recently the Mandalorian. Who needs a boring old human visage when you can have the endless fascination of a mask? If there’s some good news about everyone having to cover their face, it’s that we’ve all become infinitely more mysterious and desirable.

There are other benefits too, such as never having to worry about being caught with a booger in your nose or spinach in your teeth. You can use only your eyes to convey messages of intrigue without your honking big nose or your weak chin getting in the way.

Then there are the more ephemeral pleasures, such as the ability to channel different personalities and characters. Something that humans have liked to do since time immemorial.

The word “mask” is of ancient, even contested origins. Some say it was derived from the Latin root masca, meaning “mask, spectre, nightmare,” while others suggest it came from an Arabic word related to buffoon. Suffice to say the mask has been around as long as people and put to multiple uses — ceremonial or practical, lecherous or larcenous.

The oldest known mask dates from 7,000 BC and resembles a kind of cheery bogeyman. Or maybe boogie man, since the idea of putting on a mask and dancing around a bit is as old as human culture itself. Masked dancers pop up in prehistoric cave art. They scamper through Greek and Roman history, in the form of bacchanalia and saturnalia festivities.

The Venetian masked balls of yesteryear, or the more modern equivalents like a Truman Capote’s black-and-white version are about people getting hammered and doing naughty stuff, sometimes with other people’s partners. Masks are all about projection and fantasy, sometimes of the more outré variety.

Then there are the more everyday applications for nurses, surgeons and frontline workers of all stripes.

But leave aside practical and cultural considerations for a moment. I think if you want to create mass mask compliance, you simply need to make them cool.

Ever quick to apprise and capitalize on an opportunity, fashion has leapt into the fray. Clothing manufacturers are offering lacy, sequinned and leather versions. Some are more appealing than others: the lace versions, designed to resemble lingerie, look like you tried to take your underpants off with your teeth and simply got stuck. 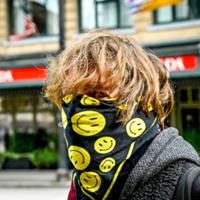 Right Now, Everyone Needs to Be a Masked Crusader

Prestige and cachet will also no doubt play a role in the new masked-up world, with everyone judging everyone else on their face coverings of choice. Designer masks, emblazoned with Burberry’s famous check or Off-White’s graphic X were some of the first to hit the streets. Design houses Gucci, Chanel and Supreme won’t be far behind, followed in turn by knockoffs at Zara and H&M. It’s not all about avoiding germs; it’s also about making money.

Good design is always better than novelty, and for the folk who had custom-made masks with their actual faces printed on them, what the hell were you thinking? The results are terrifying. Even if you’re blessed with pleasant regular features, the inevitable mask slippage is like being in a Japanese horror movie, or maybe a David Icke fantasy come true. No one wants to see you slough off your own face, like you’re wearing a skin suit.

But in general, masks are cool. In fact, a whole world of surprize awaits beneath that sexy little slip of fabric. There might be a swoon-worthy creature or more likely, a Phantom of the Opera scenario. It’s like Christmas and Halloween rolled into one, all year long.