In the autumn of 2008, an Afghan cultural organization named Hindara gave cameras to teenagers in the city of Kandahar, showed them how to use them and invited them to document their daily lives. Most of the images we’ve seen from Afghanistan are of warriors roaming dusty landscapes that feel mean and remote. These photos, eventually exhibited internationally, poignantly capture bright spots of friendship, play, work, love.

These images also record a time in Kandahar when the U.S. and Canada and NATO allies were fighting the Taliban and allied Islamist forces while pouring a lot of resources into developing infrastructure. Kandahar was a key focal point, the invaders spending billions of dollars to grant its residents new roads, wider access to drinking water, hydroelectricity from a nearby dam and a housing project for 20,000.

Polling around that time found overwhelming support among the people of Afghanistan for the U.S.-led overthrow of the Taliban and high hopes for the nation’s future.

Now Kandahar and most of the rest of the country, including the capital city Kabul, again reside in the grip of the Taliban.

Canada joined the U.S.-led invasion of Afghanistan after the attacks of Sept. 11, 2001, by the Islamist extremist network al-Qaida. The nation’s Taliban leaders denounced the 9/11 attacks but refused to hand over their mastermind, Osama bin Laden.

The Kandahar region was an arena of battle for Canadian armed forces until their mission switched, from 2011 to 2014, to training the Afghan National Security Forces. The army that today is folding in the face of the Taliban onslaught.

Those who supported Canada’s commitment could, most of the way, point to hopeful signposts. A national election in 2005 saw more than six million Afghans vote, half of them women, and a portion of seats in parliament were set aside for women representatives.

But Taliban resurgences and a government riven by division and corruption cast shadows over announced troop withdrawals by presidents Barack Obama and then Donald Trump. By last year, polling found a dark foreboding among the Afghan citizenry. Most rejected any peace agreement that prevented women and girls from going to school and nearly nine in 10 said protecting women’s rights was very important. Yet fewer than half surveyed considered peace achievable within two years. And most doubted the Afghanistan army could keep the country secure without outside support.

Those survey results paint a picture of a nation dreading the Taliban comeback it sensed was inevitable. Only last September, Taliban and Afghan government representatives finally met face to face, each side proclaiming peaceful intentions. But Joe Biden’s declaration that U.S. troops would be gone by the end of this month seemed to supercharge the Taliban insurgency.

The war in Afghanistan was Canada’s longest. “More than 40,000 Canadian Armed Forces members served in the 12-year campaign; 158 Canadian soldiers died during the Afghanistan mission. Thousands of other veterans of the war were wounded, physically and psychologically, leading to additional deaths by suicide,” reads a page on the website of the Canadian War Museum. 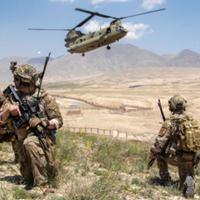 As Kandahar Falls, So Do Myths of US Power

The toll on Afghan people was of course far higher — some 71,000 civilians and 170,000 fighters killed. Throughout, there was much debate in the pages of The Tyee, as elsewhere, about whether the blood and treasure — a trillion dollars expended by the U.S. alone — could be morally and practically justifiable.

Terry Glavin, when a columnist for The Tyee, vigorously defended Canada’s commitment in Afghanistan and exhorted it be deepened. He travelled there in 2010 to write a series of profiles of “ordinary and extraordinary Afghans working to rebuild their broken society.”

The Canada-Afghanistan Solidarity Committee and the Funders Network for Afghan Women “sent me to Afghanistan to write stories about all the people we never hear about,” Glavin explained, “human rights activists, young lawyers, women building alliances of entrepreneurs, teachers, soccer players, anti-poverty activists — all these people who are just completely off the West’s radar.” No one with truly progressive values should turn their back on such “heroes” seeking a tolerant, democratic society, Glavin argued at the time and since.

Murray Dobbin, also then writing columns for The Tyee, took an opposite, dim view of Canada yoking itself to U.S. “imperial hubris.” In seeking to oust the Soviets from Afghanistan, Dobbin noted, the U.S. nurtured and armed the fiercely fundamentalist mujahedeen, predecessors to the Taliban. “In doing so, the U.S. elevated to political and cultural primacy the kind of oppressive and violent Islamic fundamentalism that until then had never been a dominant feature of life in Afghanistan.”

He continued: “In their zeal to rid the region of Soviet influence, the U.S. created in Afghanistan a country overflowing with arms and weapons where bullets rule and ballots are a joke.”

More than a decade ago, Dobbin offered this prophetic image: “There is no exit strategy, unless you visualize the last U.S. helicopter, with desperate Afghanis clamouring to get aboard, lifting off from the roof of the U.S. embassy. That was the eventual U.S. exit ‘strategy’ in Vietnam. And it may be the only one available here.”

Indeed the current discussion has shifted to whether the U.S. could have better planned its strategic retreat leaving fewer former Afghan allies to die amidst panicked chaos. In this country, too, voices decry that not enough is being done to protect and extract former “assets” to the Canadian mission. A month ago, Glavin urged in the National Post that “urgently, we should set out to rescue those Afghans who worked with Canada’s diplomats and soldiers before Taliban assassins find them and kill them.”

He is sadly right. Despite public relations by the Taliban, there is no reason to expect they will be any less oppressively patriarchal than when they last held power. However, the Taliban, inheritors of upgraded infrastructure built by their enemies, also will face a different country.

Writing last month in the Washington Post, a pair of experts observe, “Afghan society has changed, and its pluralism and civil infrastructure offer hope for a very different future.” The Taliban may have a hard time clamping their lid on a new generation who “seek a broadening and diversification of the Afghan political landscape. Through art, music, street protests, vigils and cross-country marches, Afghan men and women of different backgrounds have mobilized to protest violence, corruption and ethnic and gender discrimination. They are tired of the rule of kleptocrats and warlords and the sectarian killings they incite.”

A deep pathos suffuses such searching for some purpose in battles fought, lives spent, dreams of democratic development routed.

The pathos only deepens while viewing the accompanying photographs, snapshots of days lived breathing optimism in the air 13 years ago. The children in these photos have grown up. They may now be young adults with guns in their hands. Or at their backs.