As if a rogue coronavirus and wildfires weren’t enough, a new book reminds British Columbians that we’ve got another disaster-in-waiting to worry about: a megathrust earthquake in this part of the world.

CBC Victoria’s Gregor Craigie, host of On the Island, has long been fascinated with the impending “Big One” due for western North America. During his career, he’s interviewed everyone to do with earthquakes: seismologists, engineers, geophysicists, survivors, emergency planners and more. His new book On Borrowed Time, out in late September, revisits the quakes that came and the quakes to come.

One threat that Craigie exposes? Our own unpreparedness.

Take B.C.’s legislature building. Engineers have deemed it especially vulnerable in a major quake, its giant dome and stone walls at risk of collapse. “[T]he only politicians who ever talked publicly about fixing the building were the ones I asked directly,” writes Craigie. “And all of them, no matter their political affiliation, seemed to speak from the same script: it would not be acceptable, they repeated, to fix this building when so many schools and other public structures remain vulnerable.”

To date, there is no plan to retrofit the legislature.

Humans have a hard time conceptualizing an earthquake, let alone how such events fall within the rhythms of geological time, Craigie shows. He gives the example of a Victoria school board meeting held to explain the need to seismically upgrade a local high school. A man in attendance scoffed at the need for such a thing, saying, “There was a quake when I went here. But it’s still standing.”

Craigie writes that every earthquake survivor he’s ever interviewed told him the same thing, that “they never saw it coming.”

But afterwards? A woman who survived an earthquake in Nepal said, “I don’t trust the ground I walk on anymore.”

We anticipate the Big One today because we now know that the Juan de Fuca tectonic plate is sliding below the North American plate. This causes stress to build, storing up energy for an earthquake when the plates eventually slip.

As for when it might hit, Craigie says that experts in B.C. simply don’t know. “Is prediction inherently impossible or just fiendishly difficult? In practice, it doesn’t matter,” said one seismologist.

However, we do know when the last one happened, and the book includes the fascinating story of earthquake experts pairing their new discoveries with old oral and written histories. The clues pointing to a Big One in 1700 stretch back centuries and are sprinkled across Pacific coasts.

In the mid-1960s, Oregon State University oceanographers went hunting for evidence. Events like earthquakes trigger underwater landslides, and those landslides cause thick layers of sediment to collect on the ocean floor. The Oregon team used 30-foot-long pistons to cut out massive, cylindrical samples of the ocean floor — a physical timeline. Counting the sediment from landslides, they found a pattern of some cataclysmic disaster taking place every 400 to 600 years.

Then in 1986, geologist Brian Atwater paddled Washington’s estuaries and found giant old-growth trees seemingly stranded in swampy tidal flats — evidence of some event triggering the sinking of a forest. David Yamaguchi, a tree ring expert called a dendrochronologist, made painstaking counts of the old-growth’s rings. Combined with radiocarbon dating, he was able to determine when the trees experienced sudden death: sometime in the late-1600s or early-1700s.

The next clues come from the Indigenous people who lived in this part of the world at the time, who told their stories to Indian Agents and anthropologists who then wrote them down for the first time in the 1800s.

The Tillamook people, in what’s now known as Oregon, have a story of a dramatic battle between Thunderbird and Whale. The Makah people, in what’s now known as Washington, recall the ocean suddenly rising, leading them to flee in canoes, with some landing at Nootka Sound where their descendants still live. Much later in 1964, Chief Louis Nookmis of the Huu-ay-aht First Nation, based on Vancouver Island’s Pachena Bay, shared his people’s history of a quake that came at night and was followed by a sudden deadly wave.

It wasn’t until the 1990s that Kenji Satake of the Geological Survey of Japan would connect these North American discoveries with an “orphan tsunami” his country was never able to trace. As it turns out, the timing matched with a tsunami that hit Japan on a winter night, recorded by a samurai writer and villagers who lost hundreds of houses.

Who knew that swamps and samurais, ocean floors and oral accounts would lead to the discovery that the last Big One took place in the Cascadian subduction zone on Jan. 26, 1700? It occurred around 9 p.m., smashing into North America’s west coast and sending a tsunami to Japan 10 hours later.

In his book, Craigie surveys earthquakes everywhere from Daishiqiao, China, to Christchurch, New Zealand, to our East Coast — Ottawa, Montreal and New York City all sit in active earthquake zones. B.C. readers will be eagerly flipping through to see what we can learn and what to expect when the next Big One arrives.

On Vancouver Island, tsunami waves and currents could reach as high as 15 metres, posing a huge threat to communities like Port Alberni, Tofino and Ucluelet, Craigie warns. 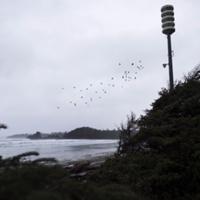 When the Tsunami Comes

In Vancouver, hundreds of old unreinforced masonry buildings are at risk of collapse, with no plans to retrofit them. The impoverished Downtown Eastside will likely be an earthquake victim, as many old buildings would shower bricks onto the sidewalk or collapse entirely. Towers built after the mid-1980s have strong seismic provisions thanks to Canadian building codes. In older buildings, strong shear walls to absorb an earthquake’s lateral force — essentially, their spines — are key to their survival.

Aside from the Big One, which is called a megathrust earthquake, the west coast also experiences two other types of quakes that hit more frequently. There are highly damaging shallow crustal earthquakes, which occur near the surface of a tectonic plate, and a major one struck Vancouver Island in 1946. Buildings shook and chimneys broke. There are also deep intraslab earthquakes, which are less damaging because they are distributed across a larger area. They are common beneath American west coast states, though shaking can be felt in B.C.

So what about the author himself — is he ready? Craigie frequents the store Total Prepare in Victoria, which sells emergency supplies, like a $250 seven-gallon pail of freeze-dried food which feeds a person for a month. He has an orange emergency backpack and shelled out $20 to secure his hot-water tank with steel straps. If it doesn’t tip in a quake, it’ll be a valuable source of drinking water. There’s more to be done in coming years to secure his house. Hopefully, it’ll be more secure than the legislature.

“As anyone who’s ever sold insurance knows,” he writes, “convincing someone to spend money now against future risk can be a tough sell.”