This second instalment of Objects of Affection continues in the vein of things long cherished. Sometimes it’s the humblest of stuff: a wooden spoon or a keychain. Sometimes it’s an investment piece that more than repays the initial outlay of cash in both constant use and deep affection.

Classic or idiosyncratic or somewhere in between, this instalment has a few surprises in store, including a special appearance by everyone’s favourite danger-prone clay figurine Mr. Bill! (And if you haven’t yet read the first instalment, start there first.)

I want to describe my object of affection — my little down vest. I’ve owned it for at least 20 years. It is light, fluffy and warm, far more so than any I have seen for sale in recent years. I have replaced the zipper twice, once with Velcro, which turned out to be a noisy way to go, so I was relieved when it was time to re-replace it.

This little vest is compressible to the size of an orange. It is the ultimate all-purpose item, either keeping me warm or pillowing my head on an airplane or in a foreign bed. It has travelled with me to multiple countries worldwide: Cuba, Costa Rica, Mexico, France, Spain, Cyprus and Northern Cyprus, Turkey, the U.K., Ireland, Morocco, Guatemala, India, Sri Lanka, Laos, Cambodia, Thailand, Vietnam, Myanmar and Nepal. I am sure I have missed some countries. In the photo I’ve sent, we are helping with the olive harvest in Sax, Spain.

Just recently, I realized (turning 67 this year) that I will own and wear this vest for the rest of my life, however long that may be. Something comforting about knowing that this vest has become a lifelong friend. — Kath Perrault

In 1975, during the height of his fame on Saturday Night Live, I bought this Mr. Bill fridge magnet. Somehow, against all odds, he’s remained in my life. He was rediscovered in the bottom of a box when we retired and moved to Vancouver Island. I thought it only fitting he too should be able to enjoy his retirement.

We fashioned a floating cabin using an old skim-board and a bird house, found his companion at a thrift store and let them set sail in our pond. We’re all living happily ever after. — Les Lawson, Qualicum Beach, B.C.

Sharpest knife in the drawer

One of my favourite objects is a kitchen knife my grandfather, Ebenezer Callihan, made in about 1944. He worked in a steel mill in Cleveland so had access to the technology of the day. A few years ago, I made a new handle for it out of apple wood.

Happy with my woodworking, I later made the end-grain cutting board in the photo.

I have been wearing my dad’s flying jacket since I was 20 and had a motorcycle. He was a fighter pilot in Tunisia in the Second World War. The label says U.S. Army. — Alex Jamieson

A fan of the pan

My most cherished possessions, aside from photos of our kids, would be this skillet, and these two wooden spoons. I’m not sure how I lucked into the skillet, being close to youngest in a family of seven. But I have it. I’m 66, soon to be 67. The skillet has to be at least 10 years older than me and who knows? Possibly far more. It’s indestructible, and despite the promise of newer “no stick” technologies, this is the one that never lets us down. The only challenge is deciding which kid to hand it down to.

As for those wooden spoons, the more battered and slightly splintered one was my mother’s, and again, I have no idea how I came to possess it. But I love it. It’s for savoury, garlic- or onion-infused foods. It probably contains as much olive oil as wood. The other, richer-coloured and sturdier wooden spoon was made by our daughter in shop, some 20 years ago, and has stirred thousands of batches of cookies and hundreds of cake batters. — Elizabeth Templeman, Heffley Creek, B.C.

What a great idea to invite people to honour the objects around the house that we love. It is an antidote to our throwaway habits. It was fun to remember the ups and downs I’ve had with my favourite folk art earrings from Newfoundland over the years!

They get a lot of attention — people love talking about Newfoundland!

A few years ago, I wore them to a concert at Maplewood Farm. But one rattled against my fingerboard, so I quickly took it off and put it on my music stand, thinking I’d remember it. I didn’t. I was so mad at myself for being careless. But then, my daughter, who is an artist, took away the remaining earring and made a copy. It’s perfect — you can’t tell which one is from Newfoundland and which one is from East Van. And people love talking about East Van! — Kathy Allison, North Vancouver

This well-worn, barely legible ring belonged to my grandmother, Gladys Greggs Kirkpatrick. She graduated from McGill in 1912. UBC didn’t open until 1915, so she attended McGill in Vancouver, before heading to Montreal to finish her degree. The ring should contain a row of red garnets flanked by tiny white pearls — the McGill school colours. The family story says that her father, Edward Greggs, a carpenter with a Grade 3 education, mortgaged the house to send her to university. I wear it every day. — Sheila Kirkby

I’ve had these sneakers for over 18 years. Almost two decades! I call them my Coffee Crisp Tigers. I remember when I bought them that the milk chocolate and frosted malt colourway reminded me of my favourite childhood Halloween treat. I also remember thinking I would have them for a long time given the legendary quality of the Onitsuka Tiger brand. 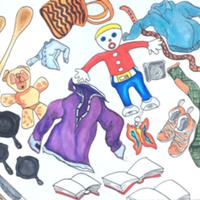 We Asked for Your ‘Objects of Affection.’ We Love What You Shared

They have definitely lived up to their reputation. Despite almost daily wear, they’ve only been reheeled once in 17 years. About five years ago, a few stitches along the western edge of the left toe cap came undone. Normally I would have started to panic, foreseeing a giant hole quickly unravelling. But no further undoing of the toe box took place, owing to the strong double row of 1.5-millimetre micro stitches. Over the years the leather has started to crack on both uppers following the natural flex of the metatarsals, leaving a pattern of aged leather like finely veined marble. So, too, the leather is gently mottling where the toe bones bend.

Today my regular walking partners proudly feature white paint splatters beside the outsoles and across the right vamp, evidence of a recent triumphant room repainting during the home isolation of COVID. Now both midsoles are wearing dangerously thin, calling for an imminent resoling. Still, I gaze upon them fondly each time I pass by the front door. I look forward to their constant companionship for at least another 18 years. — Shelly

A picture’s worth a thousand Beliebers

In high school, my Canon point-and-shoot was a chunky toy I always carried in my pocket, leaving a faded imprint on all the jeans I owned. People thought I was weird for taking pictures of everything, but everyone would soon get a smartphone and do the same. I captured all the typical stuff: camp, prom, fetal pig dissection.

It’s only been a decade since I graduated, yet looking back, some of the pictures are beginning to take on a historic quality. Skipping class to check out the Olympic atmosphere downtown. Classmates proudly wearing We Day T-shirts before the Trudeau scandal. Hanging out at Oakridge mall, now destroyed to make way for a condo utopia. Who would’ve thought that skinny jeans, Motorola flip phones and Justin Bieber haircuts would one day inspire nostalgia? I went through three Canons because they each died after a year of heavy use, but I kept this husk as a memento of a time before smartphones put cameras in every pocket. — Christopher Cheung